For-Profit or Non-Profit… Is There a Third Way?

In publications like E4C, practitioners are exposed to diverse perspectives from experts in engineering for global development regarding the best strategies for community engagement, human centered design, appropriate technology, and social entrepreneurship. Among so many approaches to humanitarian impact, there remains a lively debate between the inherent merits of for-profit versus non-profit approaches. But is there a third way?

The choice between inefficiency and neocolonialism

Oftentimes, non-profit models are thought to be old-fashioned. They seem reminiscent of large, monolithic NGOs, some of which have been accused of excessive overhead and administrative costs, as well as mismanagement of funds in the context of disasters. Thought leaders such as Paul Polak have proclaimed “The Death of Appropriate Technology,” accusing global aid providers of creating non-viable markets with overpriced ideas that are highly prone to failure in heavily subsidized and poorly understood operating environments. This critique is certainly relevant in a world where upwards of 30-40% of water pumps in Africa are in disrepair, and developing economies are craving “Trade, Not Aid” for sustainable growth. Much has been written about how the phenomenon known as “Poverty, Inc.” has created an aid-industrial complex which fosters foreign dependency rather than local self-reliance in the case of Haitian rice or Jamaican dairy, for example.

Over the past decade, the discourse of development has favored social entrepreneurship models, whereby strict free-market principles govern the strategy and allocation of investment in emerging markets. Many of the former paradigms of Participatory Rural Assessment (PRA), community-driven strategic planning have been replaced by human-centered design (HCD) product-driven design interventions. The contrast in these approaches is the tendency of PRA to yield slow results with high overhead costs versus HCD’s emphasis on rapid prototyping and business models, with implicit assumptions that a market-based approach can address socioeconomic marginalization.

In the social entrepreneurship model, project-companies focus on tweaking known products in hopes that mass production will drive down costs for accessibility, while earning revenue via volume-driven franchise models to reach scale. While this model has yielded several incredible success stories (notably d.light became the world’s leading solar lantern thanks to $2.9M from the Acumen Fund), due in large part to “patient capital” from large foundations and angel investors, the ultimate success rate of start-up social enterprises in developing countries is largely unknown. There have also been some noteworthy products that didn’t live up to the hype (LifeStraw, Sockket soccer ball, PlayPump). This funding paradigm favors foreign entrepreneurs with access to capital rather than local stakeholders whose ideas are less likely to encounter deep pockets. The result is a neocolonialist distribution of foreign investment in products designed for – not with – those in greatest need.

Some donors have been enthusiastically supportive of startups with timely ideas that create crowdfunding appeals for game-changing startup funding. When we look at the actual results of these Cinderella stories (Solar Freakin’ Roadways raised $2,275,872, Gravity Light raised $399,590), we find ‘viral’ concepts that might have been shunned by investors, yet they attract large amounts of donor funding from everyday web surfers. Generally, these campaigns are made by not-for-profit organizations, but at times it can be used by social enterprises to raise capital without surrendering equity. However, this model decouples funding from outcomes in the field, promoting a lack of transparency and accountability that could render the product useless or even harmful to end users (if they ever get their hands on it).

So, is there another way?

We tend to overlook the capability of the public sector in funding or sustaining sustainable development work. This approach is easily validated by direct experience: If governments in emerging markets had sufficient resources, then the UN’s development goals (the Millennium Development Goals that have evolved into the Sustainable Development Goals) would already be satisfied. We would have clean water for all and universal electrification achieved by taxes, not donations, without any foreign intervention. Oftentimes, progress towards these goals is hindered by real or perceived volatility and corruption in public sector agencies for public works. Long-term project horizons may be compromised by changes to the ruling party in election years. Big aid projects might be derailed by lack of accountability in civil society for large government contracts issued to multinational firms or fledgling local companies. Clearly, public-sector actors need private sector collaborators. 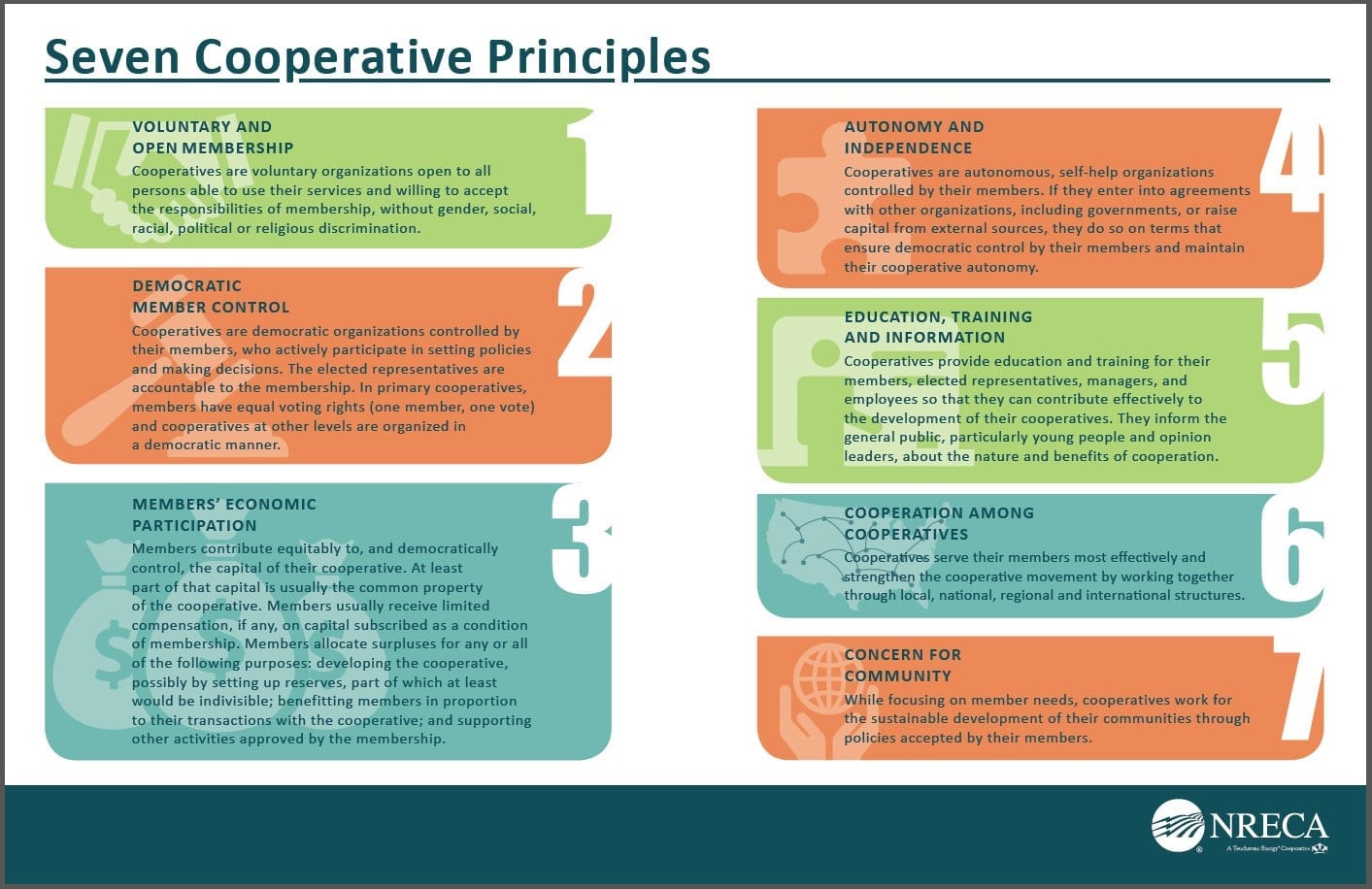 Many large infrastructure projects around the world are managed by cooperative governance structures. These entities are so far out of vogue as to be seldom even mentioned in contemporary discussions of humanitarian engineering. Could that be because cooperatives are primarily a sociological, not a technical phenomenon? Perhaps the engineering sector overlooks what it doesn’t understand. Take the following examples:

In the matrix below, I examine differential factors and outcomes of various governance structures. 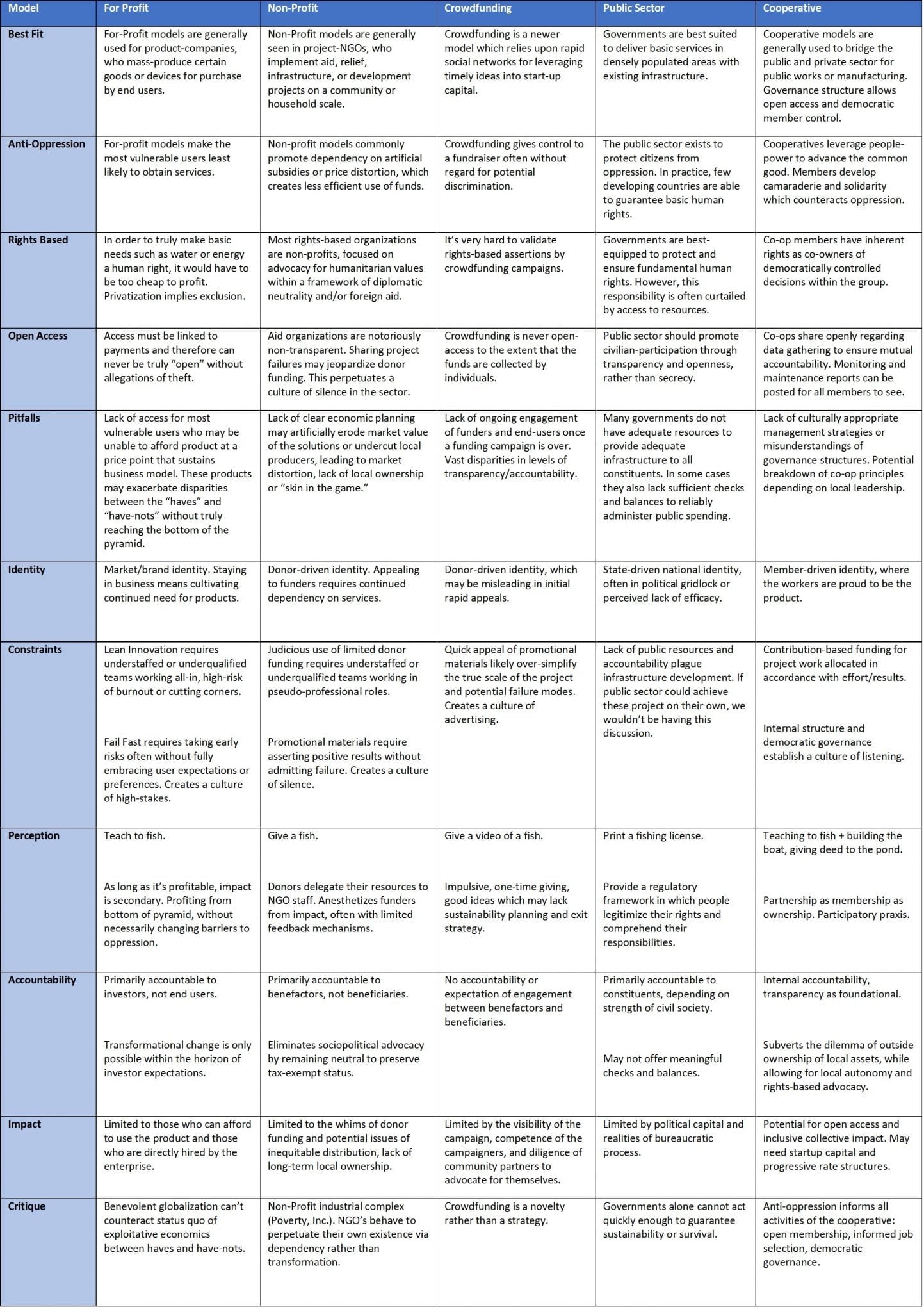 As Einstein would say, “we cannot solve our problems with the same level of thinking that created them.” When we fail to transcend the exploitation, oppression, and dependency of neoliberal and neocolonialist interventions, we replicate the same broken promises that developing communities have come to expect from Western intervention.

Aspiring development engineering practitioners often ask, “Should my big ideas be for-profit or non-profit?” In fact, the premise of starting the conversation around “my” ideas for other people’s livelihoods is inherently flawed, and perhaps reflects implicit bias in favor of foreign intervention rather than local self-determination.

On the other hand, philanthropists and impact investors looking to support big ideas often ask, “Should I be an investor or a donor?” In fact, delegating our capital to foreign owners presumes that community members are somehow incapable of taking ownership and autonomy for their own capacity building. Such presumptions are frequently built on discrimination, racism, or cultural superiority—infantilizing the very people we attempt to help.

Let’s re-frame the discussion. Let’s make the most significant question become, “What structure maximizes the resiliency, ownership, and self-determination of the end users?” Quite honestly, why else would we have been invited in the first place? If we really believe that the role of development engineering is to collaborate with communities in pursuit of a brighter future of shared possibility, then development practice must be re-oriented as pedagogy. Engineering-For-Change does not mean depositing “our” ideas and technology into “their” community, but fostering the mutual discovery and amplification of voices we’ve never heard before.

Design is a manifestation of creativity and creation is a means toward liberation. The goal of humanitarian development is not only to reduce vulnerability, but also to increase resiliency. Therefore, empowerment won’t be the destination unless it was also the journey. As development practitioners, establishing leadership and ownership within a local cooperative is the most effective way of deliberately working ourselves out of a job and leaving communities stronger than we found them.

Solar Power and the Energy Grid

There may be as much as 25 times more solar energy available to use every year as there is locked in all of the world’s coal reserves, measured by the electricity that each can produce. That potential is one of the ways that solar can fill energy demand in the future, according to this infographic by the solar leasing company SunRun. Here are the numbers (reprinted with permission). Larger version....