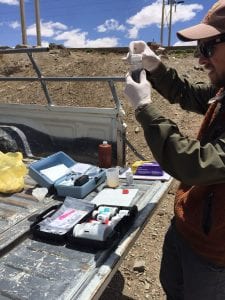 Testing for arsenic in the field. Photo: Jhonny Terrazas

In communities around the world, rain may be one of the few safe options for drinking water.

Far from piped water supplies, many families in rich and poor countries alike are dependent on untreated, natural water sources such as lakes, rivers, and private wells, for their drinking water. The predicament puts them at greater vulnerability to waterborne diseases. By recent estimates, there are almost one billion people around the world for whom this is a reality.

But in some areas, even these inadequate water supplies are too contaminated to use or are disappearing altogether. In these situations, people look to the rain for relief. In legacy mining regions of Bolivia, for example, rivers run black with waste; lakes dry up into nothingness; groundwater turns saltier than the sea. In this situation, rainwater is often seen as the only water resource left that has not been impacted by upstream tailings or toilets.

Rainwater harvesting is often promoted as a viable alternative to contaminated groundwater. It is also an important means of adapting to climate change all over the world. Even in semi-arid regions, rainwater can provide enough drinking water for families over the course of the year if it is captured and used adequately. Small rainwater harvesting systems can also be an important source of water for vulnerable populations in conflict zones and refugee camps.

For drinking, however, the solution is only as good as the quality of the water. Despite the perception that rainwater is pure, there are myriad risks of contamination of rainwater in the atmosphere, in the collection process, and during storage.

Despite the perception that rainwater is pure, there are myriad risks of contamination of rainwater in the atmosphere, in the collection process, and during storage.

More concerning is the presence of contaminants that are not easily removed through household or point-of-use treatment mechanisms, especially in remote or low-resource areas where rainwater harvesting is most critical. These include chemical contaminants such as arsenic, lead, and other trace metals.

To investigate these risks, my colleagues and I, in a collaboration between the Centro de Ecología y Pueblos Andinos (CEPA), Comité Académico Técnico de Asesoramiento a Problemas Ambientales (CATAPA), and Mennonite Central Committee, decided to test the quality of water captured in rainwater harvesting systems in a remote mining region of the Bolivian Andes. Over the course of 22 months, spanning two wet seasons, we tested 18 previously-installed tanks for a range of chemical and microbial contaminants. 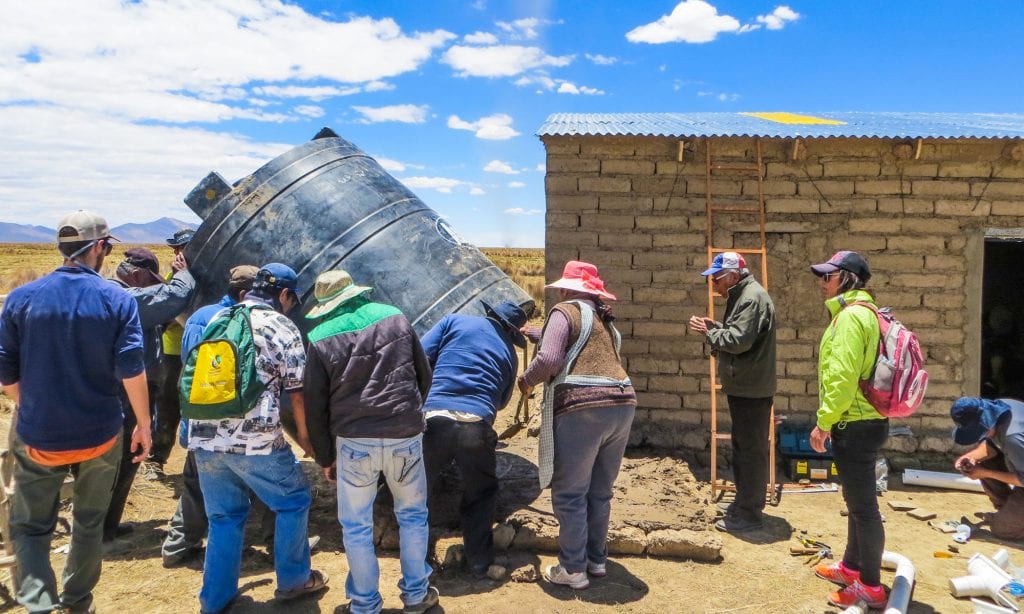 Due to the extremely cold ambient temperatures that persist in the Andes for much of the year, we found that microbial contamination was of little concern. The chemical water quality was also a vast improvement over the unprotected wells and rivers nearby.

We discovered something surprising, however. Arsenic.  Over the course of the study, arsenic concentrations were consistently above the World Health Organization drinking water limit of 10 parts per billion (ppb) in every tank. The average arsenic concentration of all the tanks was 20 ppb, and 96% of all measurements showed some level of detectable arsenic. The highest concentration found was 50 ppb, or five times the health limit.

Although we were not able to identify the broader source of the arsenic in the environment—whether naturally occurring or mobilized as a result of heavy mining activity in the area— through follow up tests, we determined that the major source of the arsenic is dust on the roof that is flushed into the rainwater tank. It took only 24 hours for about a quarter of a teaspoon of dust mixed with deionized water to raise the dissolved arsenic levels above the health goal. Tests done with the roof and gutter materials, however, did not result in any arsenic leaching into the water. 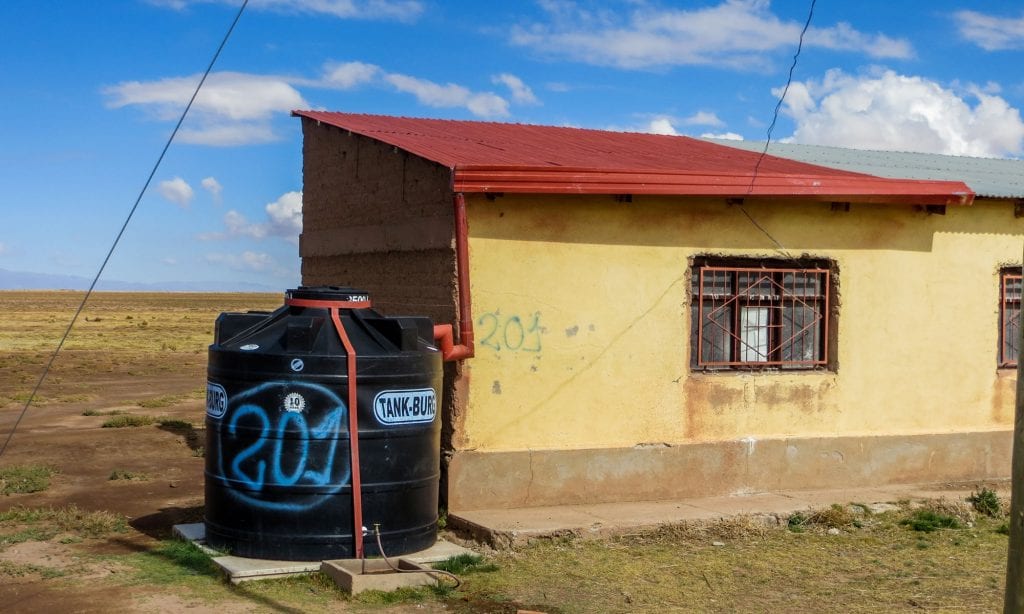 The results, appearing this month in the journal Science of the Total Environment, have implications for the assumptions many people make regarding rainwater harvesting as a completely safe alternative. Care should be taken to assess all the possible ways rainwater might be contaminated, especially in areas of heavy industry, such as mining, quarrying, smelting, brick manufacturing, etc. These activities may cause arsenic-rich dust to be released into the environment, eventually settling on the roofs that collect rainwater. Naturally occurring arsenic in soils or arsenic in pesticides could also be sources in some agricultural areas.

These findings highlight the need to include arsenic as a standard water quality monitoring parameter in rainwater harvesting scenarios, something that is rarely done. Field portable arsenic kits are widely available internationally and should be included in any rainwater harvesting project budget. We used the ITS Econquick Test and the Palintest Arsenator. Other trace metals may also be present in rainwater. Lead, cadmium, mercury, chromium and others could also be a problem in some areas, since the composition of the dust will vary from place to place, and merit further study.

Our results also point to the importance of using an adequate first flush system during rainwater harvesting. A first flush system diverts the first liters of water during a rainstorm, either to waste or a secondary reservoir, to prevent any dust or other contamination on the roof from entering the primary storage tank.

Arsenic-rich dust can settle on roofs that collect rainwater. Arsenic in soils and pesticides could also be sources in some agricultural areas.

We found that, although the first flush systems we tested were preventing some dust from entering the tanks, they were not large enough, still allowing enough dust to enter to significantly raise the arsenic concentrations. A first flush system should generally be large enough to capture approximately 40 liters per 100 square meters of roof area. By this rule of thumb, the systems we tested were about five times too small. CEPA and CATAPA are currently testing larger first flush systems to evaluate their ability to minimize the impact of roof dust on water quality.

Overall, the safest water may still come from the clouds, and this is certainly the case in the area of Bolivia where the study was performed. By comparison, the average arsenic concentrations of the nearby groundwater and surface water sources were an order of magnitude greater than what was in the rainwater.

We should strive to make all drinking water safe, for all people, at all times.

But the long-term question should not be simply, “Which water is safest relative to the others?” Rather, we should strive to make all drinking water safe, for all people, at all times. Aim for the sky.

Blockchain as a Humanitarian Tool for Digital Identity

The world is abuzz with blockchain. Financial service providers, governmental agencies and—most recently—humanitarian organizations are all investigating how blockchain and distributed ledger technology (DLT), generally, could improve operations. A Primer on Blockchain Despite its popularity, many still wonder, what is blockchain? Put simply, a blockchain is a list maintained by a number of users without a central repository and, typically, without a central authority. The National Institute of...