Water pours from a raintwater catchment system in Tanzania. Photo: ssilberman (CC BY 2.0) 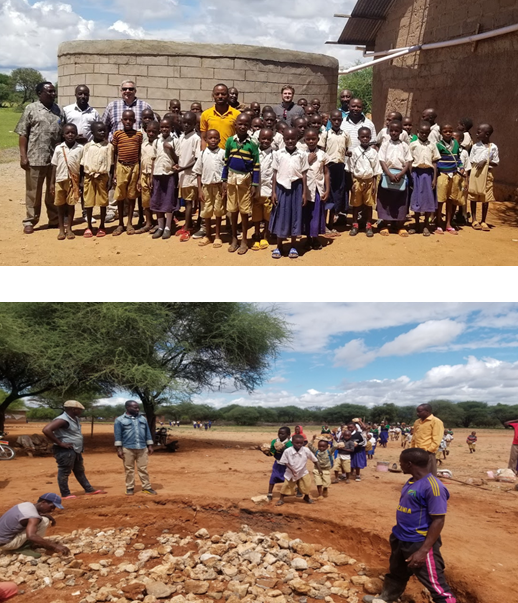 Community members come together to collect materials for the construction of the third rainwater harvesting storage tank. Photos supplied by the author

Marwa Village is a predominantly Masai community of around 5000, located in Tanzania along the Pangani River. Most residents travel three to six kilometers to the Pangani River daily to obtain water for domestic use. The inability to access a sufficient quantity of clean water is one of the greatest factors hampering sustainable community and economic development of this region.

While pursuing graduate study at The Ohio State University, I spent three years working on the implementation of three rainwater harvesting systems in Tanzania as part of the Sustainable Resilient Communities Program. Rainwater harvesting addressed three top priorities identified by the community, including access to clean water, improvements to the medical dispensary, and improvements to their primary schools. At completion, our work had reduced the cost of the tank by $750, increased the storage volume from 19,000 liters to 37,000 liters, and community engagements increased from none to 10 percent. By the time we left, local contractors were able to construct the improved tank design with limited input from outside partners.

While working on the project, I learned five lessons that I believe are valuable for establishing trust and relationships, building community capacity, and implementing initiatives in resource-constrained environments. This is what I learned.

Be Patient. The process takes an immense amount of time.

The three phases of the project were implemented over a three year period through five trips. Throughout this time we held numerous meetings and discussions with various members of the local community and with our in-country partners. At the start of the project, I felt frustrated with not being able to implement the systems quickly to allow for immediate impact, but by the end of the implementation, I came to value the process and saw the immense benefits of the slow strategic implementation.

Be open to cultural differences. Know when to defer to local partners

As someone raised in the United States, I was structured to think of work as 8-hour shifts. For our Tanzanian counterparts, this was not the case. They preferred to start later in the day and end early and return to finish the next day as opposed to finishing the job in one day. Working within different cultural contexts taught me that there isn’t one correct way to approach projects or challenges. This was especially the case when it came to the manual construction portions of the project. I experienced the vast amount of effort required to mix concrete by hand and came to appreciate the relevance of working shorter days.

Recognize your position of power and aim to create an environment where questions or concerns can be addressed.

It took two tank construction projects and countless meetings for our in-country contract to disclose that he did not understand our technical engineering drawings. Upon reflection, we realized that we had not created a space in which this information could be shared openly, especially in a context where raising concerns could be seen as unprofessional.. Placing emphasis on creating an environment where questions or concerns can be raised without fear of negative repercussions is crucial for building authentic community relationships and project success.

Incorporate feedback and local knowledge into initiatives. Almost everything has a layer of complexity.

One major point of contention during the construction of the rainwater harvesting tanks was the placement of an outside coating of cement on the tanks. Our in-country partners insisted that it was required even though there was no technical value from our perspective. In the third year of the project a young Tanzanian engineer came out to see the project. He informed us that the coating does not, in fact, add any strength or technical value, but almost all tanks constructed in this region have had a similar coating. If the coating is not added then the community members will think that the contractor did not “finish” the tank.  Although the coating added to the cost of the tank, the alternative could have resulted in a loss of trust with the community. 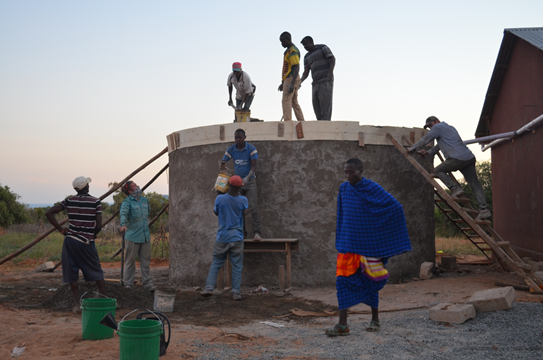 Community members work alongside project partners to construct the top slab of the second installation of the rainwater harvesting system. Photo supplied by the author

Trust and rely on local partners.

The success of this project is owed, in large, to our in-country partners. Partnerships with local NGO Kilimanjaro Hope Organization and the University of Dodoma allowed for a flow of communication and understanding about cultural and societal impacts that we as outsiders would never be able to understand.

One of my most vivid memories from this project was a meeting with the community council and our NGO partner during the third year of the project around procuring materials for the tank. In the past, community members stated that it would be too difficult for the community to do this. As the discussion progressed, I was unable to follow the pace of the conversation in Kiswahili as it began to get more and more, from my perspective, argumentative.

The conversation finished and I asked our NGO partner, Kateri Daniels, about what had happened, and he explained to me that when he asked the community if they would gather the materials, the leaders of the community did not even pause on “yes” or “no” but started right in on the logistics. This is when I felt that the community perception of the project transitioned from “that’s their tank” to “that’s our tank”. This initiative was the first phase of a proposed long term solution to the water needs of the community and the success of this project built a strong foundation for the future.

Patrick earned a B.S. in Civil Engineering with a minor in Humanitarian Engineering and the Global Option Distinction. Then he earned a M.S. from the Department of Food, Agricultural, and Biological Engineering from The Ohio State University. His research efforts are focused on Sustainable Development Engineering, and he works with rural communities on construction and optimization of water storage. Patrick has worked on a variety of projects in Tanzania, Ghana, Guatemala, and Honduras.

The author, Jacob Mugendi, discusses this research on a panel in a recorded E4C Webinar, Digital Development in Kenya: Challenges and Opportunities. The information and communications technology (ICT) industry thrives in Kenyan cities, but vast rural tracts in Northern Kenya are stranded on the wrong side of the digital divide. One of the weakest links is a lack of infrastructure, both for offline use such as roads, and for the...