How to make a worm composting bin

Last year, trash clogged the gutters and alleys between of Los Platanitos, a community on the outskirts of Santo Domingo in the Dominican Republic. The government waste collection service was unreliable, so people dumped their trash where they could. The problem was so bad that backed up drainage channels flooded homes during heavy rains. Now, worms in composting bins are solving part of the problem. A team from the University of Texas in Austin built vermiculture composting bins to turn food waste into fertilizer. Dinner scraps, rinds, peels, crusts and nearly anything organic can feed the worms. Now they just need to dispose of the rest of the waste (we have a few ideas for plastic bottles… and almost anything else). 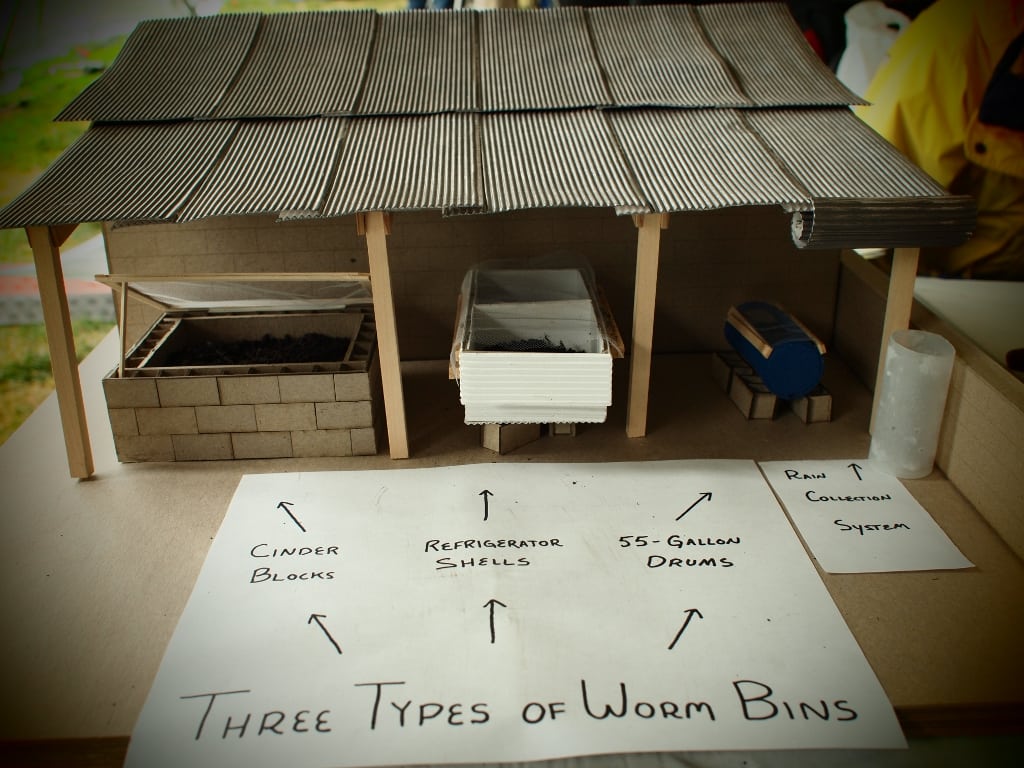 A team from the University of Texas, Austin built this crazy little replica of their work in Los Platanitos, in the Dominican Republic, to explain their vermiculture solution to trash in the streets. The team won a US EPA P3 grant to carry out some of their work. These are three bins built from different materials that they have tested. We like the idea of using a refrigerator shell. Photo by Rob Goodier

The community experimented with several bin construction ideas, including cinder blocks, plastic 55 gallon drums, and even an old refrigerator shell that had been stripped for parts. Their creativity inspired us to upcycle a refrigerator into a vermiculture bin. But we went with a mini fridge for use for a single household. We began the project at Kokua Worms, a vermiculture supply depot in Honolulu, Hawaii, where we learned about worms and the principles of vermiculture. This is how to build a worm composting bin, and how to care for your worms. 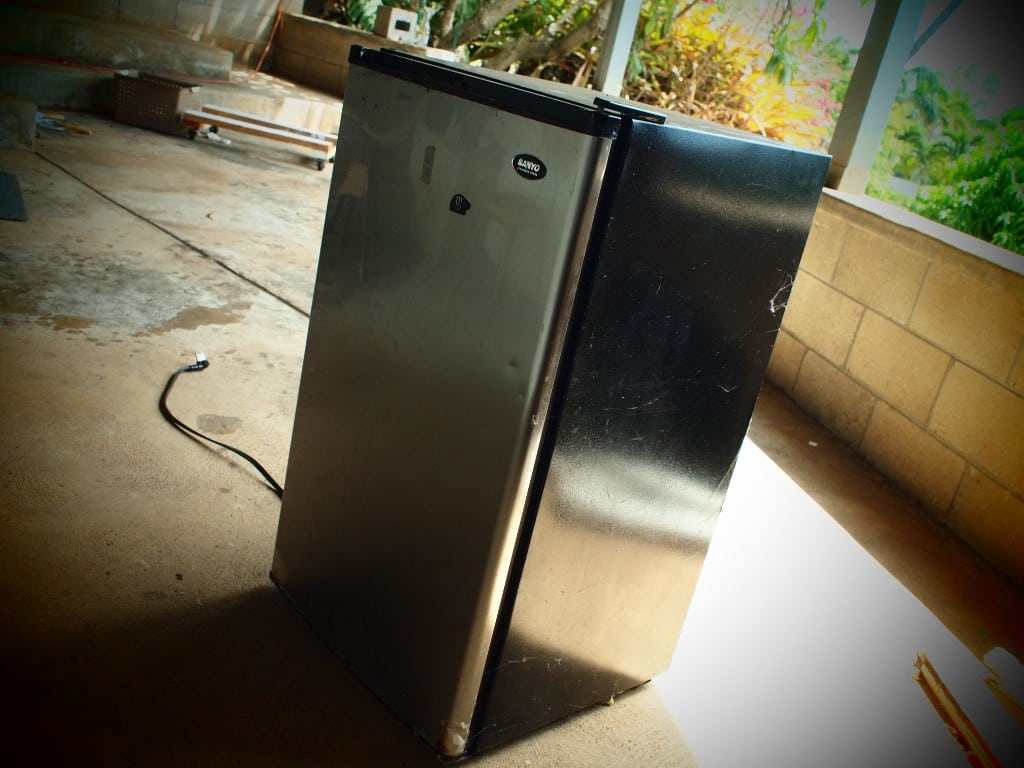 This mini fridge was destined for a landfill before we comandeered it for worm composting. First, we removed the door, the cooling tray and the motor. Photo by Rob Goodier 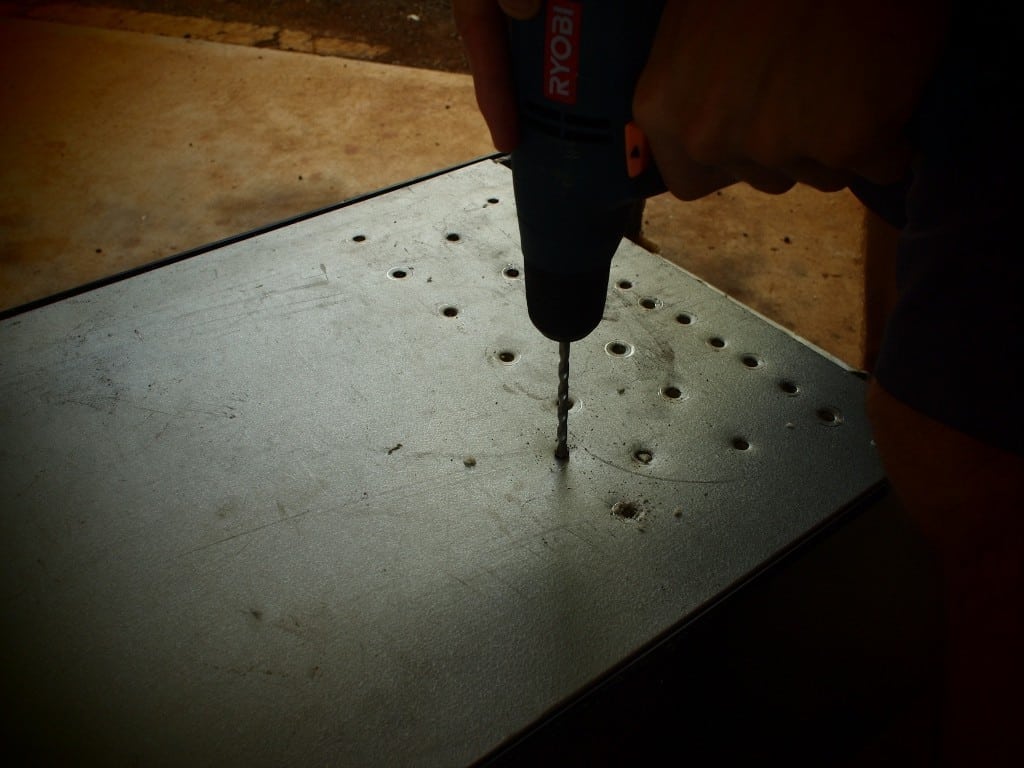 Worms in bins need three basic things: food, ventilation and drainage. We perforated the back of the fridge, which will be the bottom of the worm bin, to allow for drainage. Ventilation will come through the top. Photo by Rob Goodier 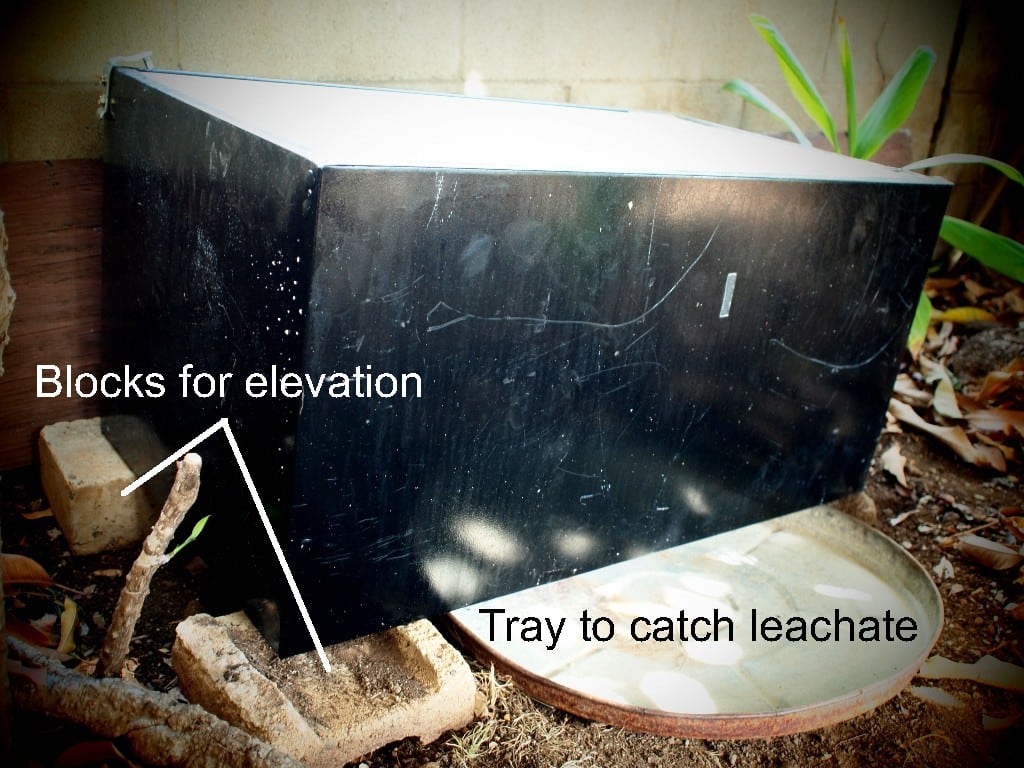 We placed our bin on broken cinder blocks to elevate it and improve drainage. The leachate that seeps out is full of nutrients for plants. It’s okay if it drains into the soil, but we wanted to collect it to feed to other plants in the garden. To do that, we slipped a discarded trashcan lid under the bin. Photo by Rob Goodier 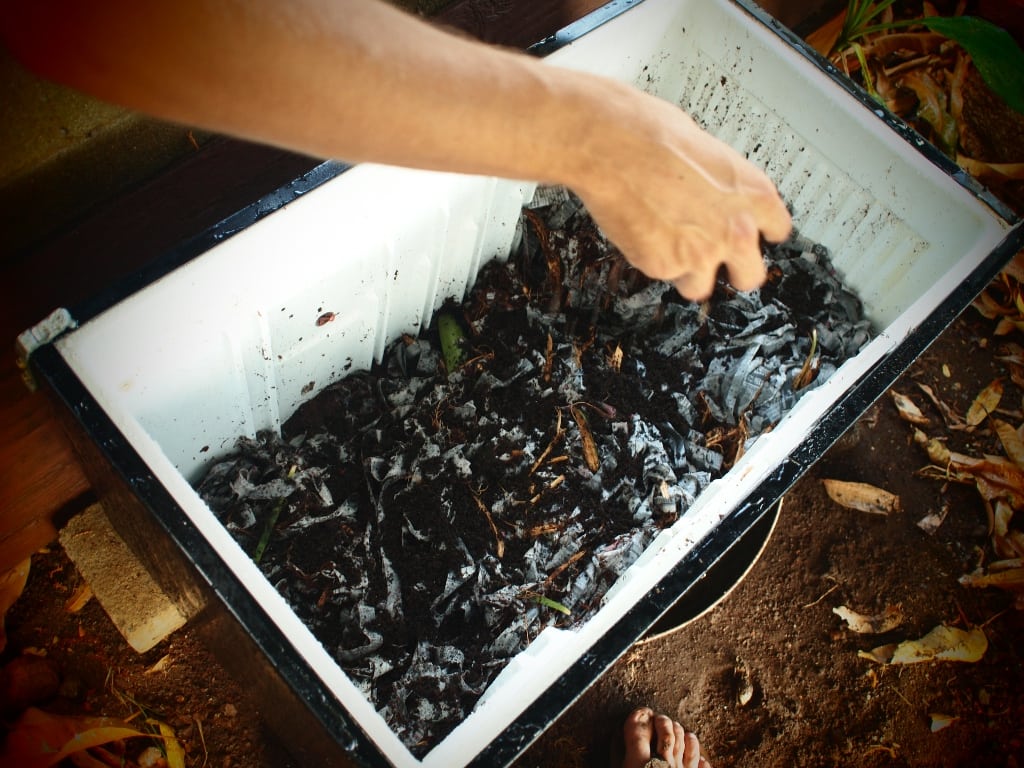 Layers, layers layers. That was what we learned at Kokua Worms. First, place a layer of shredded newspaper or other cellulose-rich material. We chose newspaper plus coconut husk. Then we sprinkled it with the “worm poop” soil that our worms came in. Then we released the worms. The next layer is food scraps. On top of all of it, we placed another layer of shredded newspaper and topped it with a damp towel.  Photo by Rob Goodier 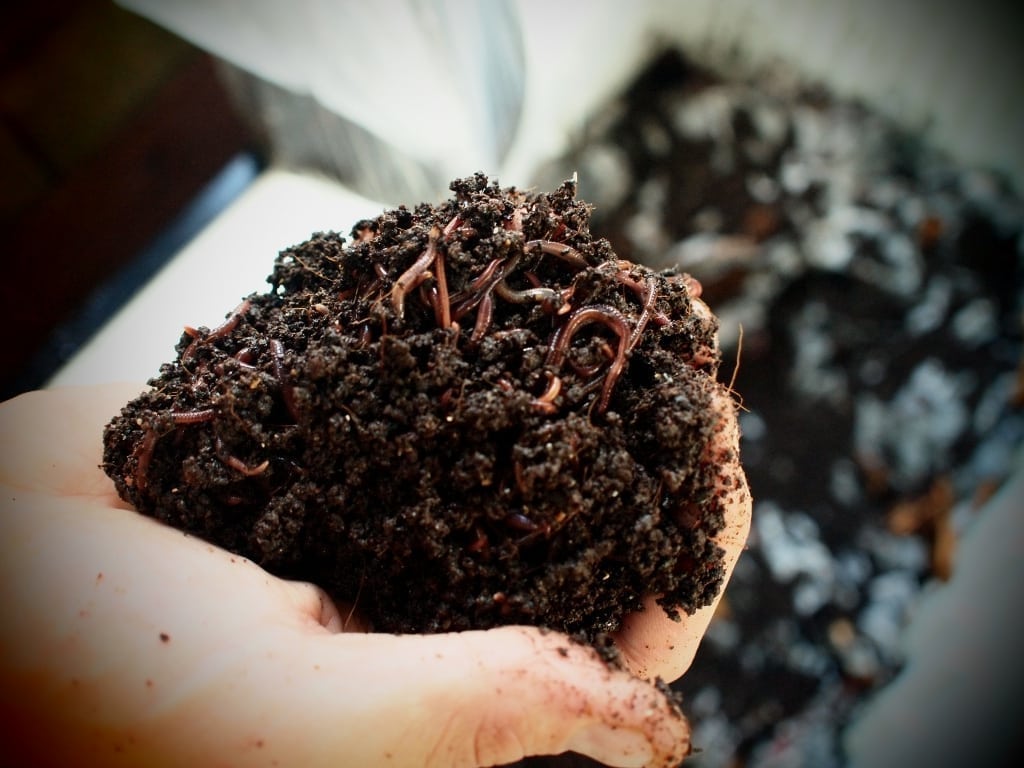 Kokua Worms recommends using two varieties: Red Wigglers (Eisenia fetida) and Indian Blue Worms (Perionyx excavatus). They are hard to tell apart by sight, but both are wriggling around in this handful of worms. Photo by Rob Goodier

We started our worms on a diet of watermelon rinds, lime and mango peels, a few yard clippings and coffee grounds. We were warned to avoid meats and fatty foods because they can smell bad. And papaya seeds can make the worms sterile. 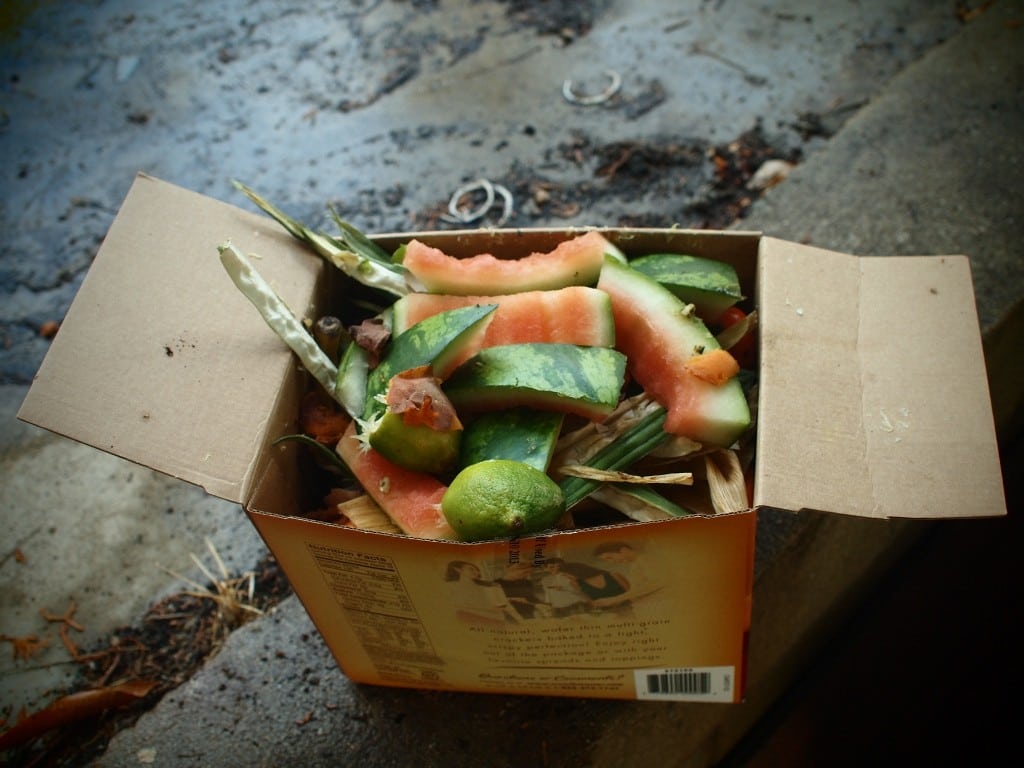 We plan to feed the worms every other day. They need food at least once per week, and the more feedings the better. They can eat their weight in food every day! And make sure to water them, too. The shredded newspaper should be damp. Photo by Rob Goodier

We cut a piece of plywood to loosely cover the top of the bin and allow for air circulation while protecting it from playing kids and stray basketballs. 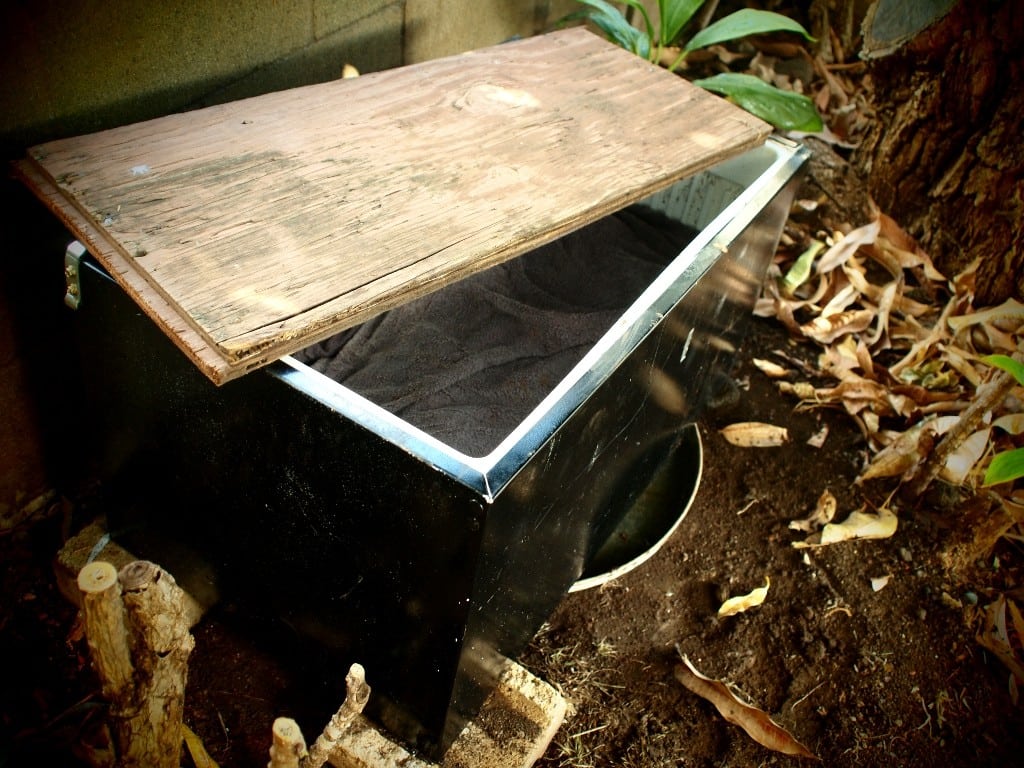 With enough food scraps and water, the worm population should have plenty of room to grow in this fridge shell. Six months from now we’ll peel back the top layers and harvest the first batch of “worm poop” compost. Photo by Rob Goodier 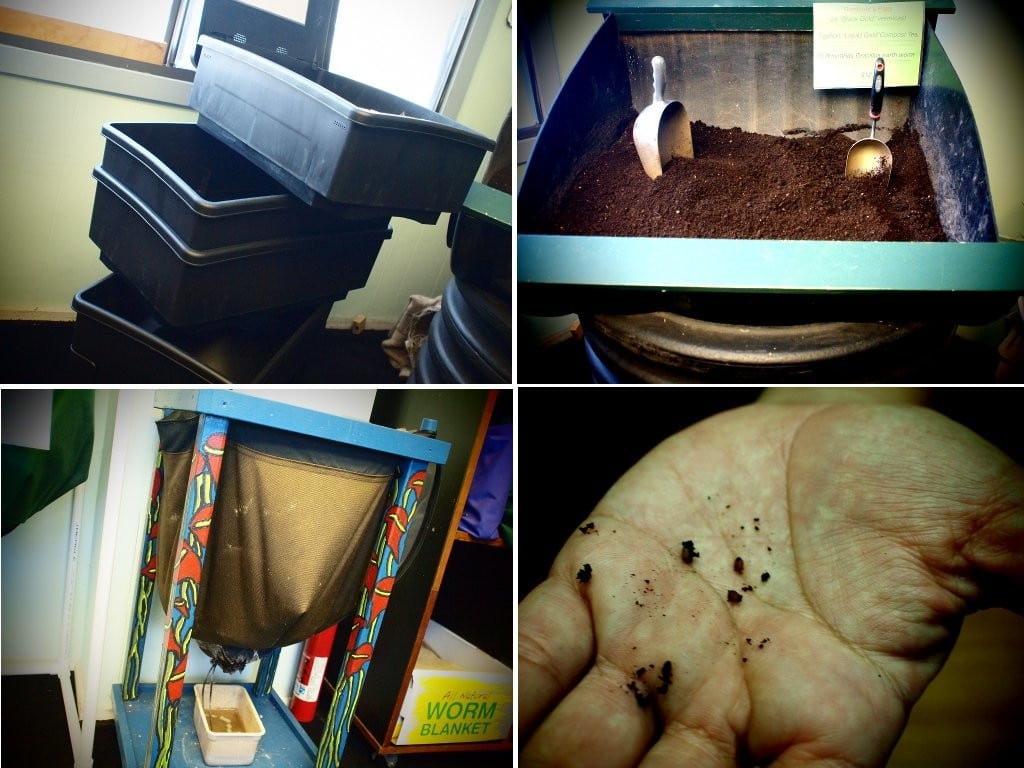 Kokua sells other styles of worm composters. Clockwise from the top left, this is a modular stacked tray system that can expand as the worm population grows. Worms pass between the bins through the drainage holes;  The Piece of Pipe bin drains into a wide stand below the compost; The oval specks are worm cocoons that hold four to six baby worms; The Worm Hangout is a continuous flow system that allows you to harvest the compost from the bottom. Photos by Rob Goodier

How can the world increase global food production to meet the demand of our growing population? The UN says we need 70 percent more food by the year 2050. USAID has one interesting solution.   Larger version Used with permission from USAID