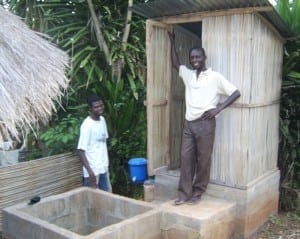 In this composting pit latrine design, when waste has filled the first pit, the latrine is moved over the second pit. The first pit converts to compost and can be emptied to fertilize fields.

The composting pit latrine has long been the gold standard for sanitation in global development. SOIL builds an easy-to clean model with centralized composting stations in Haiti, and Toilets for People has its own version, which is also in our Solutions Library. We also feature all of these models of latrines in our Solutions Library. But some aspects of the composting latrine’s performance and how it compares to flush toilets are not so well known. A new study aims to investigate, and researchers are seeking funding from the crowd to cover the expense.

What we know is that composting toilets have clear ecological and economical advantages over flush toilets. They turn waste into compost, and the compost can fertilize crops, completing a circle of nutrients that saves soils and saves money. They save money in the costs of sewage and in fertilizer. Importantly, they also require much less water. Those arguments for composting latrines are well documented and have been made for years, but how do they compare in hygiene and how do they fare within the cultures of the different people who use them? Do they limit the spread of disease as well as a flush system with a septic tank or a sewer might? And do they feel as comfortable for families to use? Are they as accessible? And are they really the most sustainable solution in global sanitation?

Without this kind of research, the impact of different kinds of toilets will remain unknown, and aid groups may build technologies that are not in the best interests of the people who use them.

If funded, the research will take place alongside a latrine construction project in Honduras. Three US Rotary Clubs and one in Venezuela have paid to build 80 latrines in two Honduran communities. The researchers plan to randomly assign either a traditional flush toilet or a composting toilet to each of the households, and then measure the effects.

The implications of this kind of research are enormous. About 2.5 billion people don’t have access to a clean toilet worldwide. Open defecation and improperly maintained, overflowing latrines spew disease-infested filth into drinking water and food supplies. The resultant cholera, hepatitis, parasites such as hookworms and other microscopic nasties claim lives, sicken people and cripple economies by keeping people home from school and home from work.

Deal and his colleagues would like to treat the project as a pilot for future sanitation installments, and the research could serve to allay doubts about the best type of toilets for the region.

Paraphrasing Water Missions International’s defense of their research, without this kind of research, the impact of different kinds of toilets will remain unknown, and aid groups and others working in the region may choose to build technologies that are not in the best interests of the people who use them.

Data lovers may appreciate one of the perks of donating for the study: the researchers will provide a database and website to track the progress and see maps and reports.

For more, please see Water Mission International’s video below and consider supporting them at experiment.com.

The Link Between Rain and Diarrhea

Rain pours from a rooftop in the Ecuadoran coastal city of Guayaquil. A new study links heavy rains that follow dry weather to a 36 percent uptick in diarrhea cases. Diarrhea rates may be tied to rainfall patterns in developing countries. In the low-lying villages of the coastal province of Esmeraldas in northwestern Ecuador human waste accumulates on the ground and in unsealed latrines when the weather is dry. Then...