Impact.Engineered Made Tough Decisions in Tech and Social Impact Awards

Imagine trying to choose the winners of social impact and technological ingenuity awards from among multinational conglomerates with social responsibility budgets that dwarf the entire revenues of smaller companies. Or choosing from among little-known startups built around deeply creative technologies, like, for example, a digital platform that lowers bills farmers, or wearable indoor air-quality sensors. The judges at Impact.Engineered faced tough choices.

From organizations that have worked for many years to build infrastructure in emergency settings, to ventures on the journey to launch new hardware, Impact.Engineered celebrates innovators shaping the future of global development – Impact.Engineered Awards

Impact.Engineered is co-hosted by Engineering for Change and the American Society of Mechanical Engineers and held in in October in Brooklyn, New York. The event awards people, businesses and organizations for technological prowess and social impact in the service of the underserved while meeting the UN’s Sustainable Development Goals. In this year’s competition, the candidates in each category could well have been the winners. They have earned much more than the mentions below. The people, foundations and startups in the sector of sustainable development do not often receive the attention their work deserves. Impact.Engineered is a short step toward rectifying the problem.

“We feel that many of these efforts and these individuals are under valued and under represented, so we’re excited to share with you some of our award winners today,” Iana Aranda, President of Engineering for Change said at the ceremony. These are the winners and the tough competition they faced.

Woman Leading in Technology and Impact 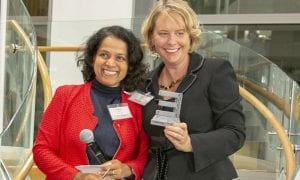 [Minute 9.45 in the facebook live video below] There was an uplifting theme in this category that appeared in its introduction at the ceremony and the acceptance speech by the award winner; the day will come when this is not an awards category.

“One day this won’t be a category, but until then we’re celebrating women leading in technology and impact. For now we believe it is important to support the women engineers and specialists committed to technology for good,” says Kamakshi Rao, Senior Investment Director at Ankur Capital, introducing the award.

The impossible decision in this category was between:

“When I looked at the other nominees I knew I wasn’t going to win. Everyone is amazing. Someday there won’t have to be an award for this, but we still have to work our asses off to get there,” Dr. Sterling said in her acceptance speech.

This category pit multinationals with some of the world’s most recognizable brands against one another, and the winner was the lesser known, but highly relevant East African telecom Safaricom. The company squared off against three conglomerates with outsized philanthropic arms, Microsoft, Nestle and the Ford Foundation for its work in Eastern Africa.

“This year’s winner is an organization that certainly has philanthropic initiatives, but that really distinguishes itself by the extent to which it has aligned and mapped its core business to sustainable development. From its corporate mission and vision all the way down to the team level goals and metrics, this organization thoroughly demonstrates its commitment to leveraging technology to address the SDGs,” says the award’s presenter, Kalan Guiley, Senior Vice President for ASME’s Public Affairs and Outreach.

Benjamin Makai, Senior Manager of Technology for Development at Safaricom accepted the award for Industry Driving Social Impact from Impact.Engineered but could not attend in person. This is his brief acceptance speech (video above). 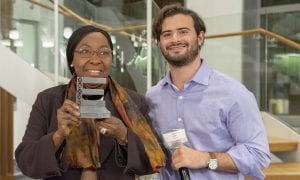 EQUALS in Tech (left) accepts the Connecting the Unconnected Award from Aiden Slaven Chief of Staff at ID2020.

[Minute 14:56 in Facebook live below] Three organizations vied for the Connecting the Unconnected Award, each with a bold strategy for delivering the advantages of the digital age to people who have been left out. The winner is Equals in Tech, whose vision is to empower women and girls requiring skills that will help them become both ICT users and creators in the digital world.

The runners up are:

[Minute 17:52 in Facebook live below]  The Hardware Trailblazers is one of the awards closest the hearts of Engineering for Change’s founders and this year’s four contestants are particularly exciting. The runners up are: 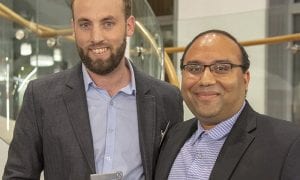 [20:23 at Facebook live below] Attendees, speakers, and anyone interested voted for their choice in the Rising Star Award that goes to startups pioneering innovative technologies in service of the  Sustainable Development Goals. Every contender in this category is worth a close look. The winners are Nami Baral and Angelo Alessio at Harvest Platform, which eliminates bad debt starting with high-interest bank loans.

One similarity ran between many of the acceptance speeches: these great enterprises are looking for talent. Job hunters take note. There was the unmistakable theme of a call for job applicants with skillsets these organizations can use. For more information, links, tweets and photos, please see impact-engineered.org.

Posted by Engineering for Change on Wednesday, October 9, 2019

Agricultural technologies swept the competition in Kenya at the American Society of Mechanical Engineers Innovation Showcase in May. The winners are GrainMate, a grain moisture sensor by Sesi Technologies based in Ghana, a multicrop thresher by SAYeTECH, also from Ghana, and Mazawiplus, a mobile milk chiller by Savanna Circuit Tech based in Kenya. As expected from the global competition, all three iShow winning devices are low-cost and designed to solve...

3D-printed earthen housing, a pyrolizer that turns plastic waste into fuel oil, a phase-changing infant warmer and more made our list of promising prototypes...

The CU Boulder Mortenson Center for Global Engineering is pioneering a new vision for engineering for global development, and awarding professionals and students that...