The rice terraces of Longji, near the city of Guilin in Guangxi, China, exemplify an ancient farming technique that slows erosion and conserves water on hillside fields. Photo by kahumphrey / Flickr

Part One of a two-part series. Part Two: Prototypes and Leading-Edge Tools in Dryland Farming.

In the arid fields of Turkana, Kenya, Israeli farmers are sharing their expertise at coaxing crops from the dry soil of their homeland. Together with local subsistence farmers, the Israel-based Arava Institute has built more than 100 rock dams and dozens of artificial ponds, furrowed the fields and watered them with gravity-fed drip irrigation systems. That combination of centuries-old techniques with modern tools demonstrates how farms can thrive in the world’s deserts and semi-arid climates.

This is a look at the old techniques and proven, low-cost tools that are improving dryland farming in developing countries.

Improving how we farm drylands could ease food insecurity in some of the areas of the world that are most vulnerable to drought and hunger. Drylands, defined as arid, semi-arid and dry sub-humid climates, cover more than one-third of the planet’s land and are home to more than one-third of the population. Without access to information and technology, farms in these lands can falter during yearly dry seasons and suffer catastrophic losses during periodic droughts.

If we look just at the semi-arid tropics, spots on a belt around the globe that runs through mostly developing countries, we will find a swiftly multiplying 10 percent of the world’s population and 13 percent of the world’s cultivated land. Nearly all of that land is rain-fed. That is to say that it is not irrigated.

This land’s potential to grow crops is about five times higher than the reality, according to mathematical models by a team at the International Crops Research Institute in Andhra Pradesh, India. Farmers could meet that potential using existing technology and better land management, the researchers say. It would take investments in solutions such as farmer education, institutions and media that provide updates on weather, markets and crop choices, pesticides, fertilizers and irrigation infrastructure.

If that sounds too expensive, yields could still double without irrigation but with improved water conservation,fertilizer and pesticides, the researchers report. And yields can improve by a more modest 15 percent average on dry semi-arid tropical farms if only land management is improved.

“It comes back to water and access to water,” says Khanjan Mehta, Director of the Humanitarian Engineering and Social Entrepreneurship (HESE) Program at Pennsylvania State University and an E4C Contributing Editor. Mehta and his team have worked with dryland farmers and researched greenhouse farming in Mozambique. “Soil quality might be a limiting factor,” he says. “But what I learned in Mozambique is that it’s not necessarily true. You can grow straight out of sand the way you can grow straight out of a bottle of water; you just need to add nutrients.”

Fortunately, for water conservation, farmers have a deep history of experience to draw on. Water retention techniques have been in use for thousands of years. Experts at the US-based farming institute ECHO have published a helpful primer. 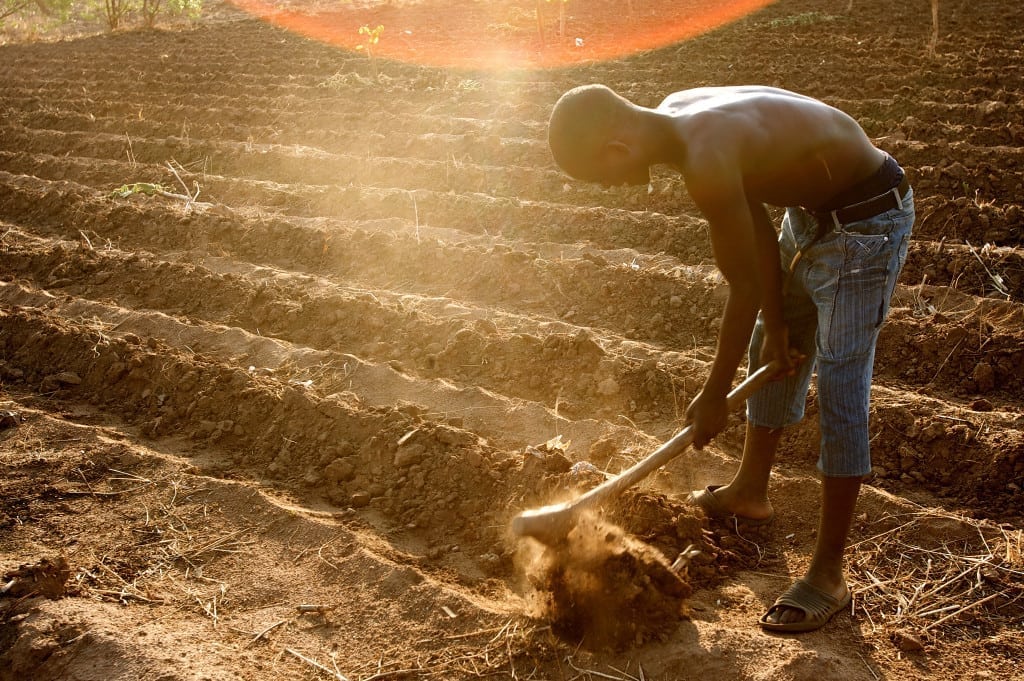 A farmer builds furrows in his field near Nathenje on the outskirts of Lilongwe, Malawi. Photo by Stephen Morrison for the Australian Department of Foreign Affairs and Trade / Flickr

On flat farms, mounding the land into long furrows prevents erosion and traps water around the plants. On gently sloping farms, furrows, or bunds, along contour lines check runoff, slow erosion and allow rainwater to seep into the soil. Terraces do the same work on hillside farms. 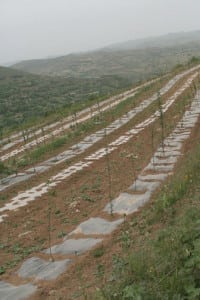 Cover the soil with organic mulch or even plastic sheeting to prevent evaporation. Tilling can also work, turning the surface into a dirt mulch. Groundwater forms films throughout the soil that draw the water upward as the top layer leaches out into the air. Mulch and tillage provide a buffer that slows the water film. Weeding slows the loss of moisture through the weeds’ leaves, a process called transpiration.

When lands are managed to retain water, leaving fields fallow for a season in dry climates can allow them to soak up enough water to grow crops the next year.

Some crops thrive in drier climates. Millet, for example, does much better than corn even in fields that are not properly managed. And, of course, drought-resistant varieties of many kinds of crops are under cultivation and in development now.

Farmers who choose seeds well will be more likely avoid crop losses and they may not need to do as much work to conserve water. The International Crops Research Institute found only marginal improvements on fields that employed good water conservation measures in semi-arid tropical climates when the crops were drought resistant grains and certain grain legumes.

Also, give seeds room to grow. Seeds should be given more space in dry climates to avoid forcing plants to compete for water.

Taking one step up the technological ladder from rainfed fields, some dryland farmers build simple rock dams or capture rainwater and store it for use during the dry season. A simple way to capture rainwater is with rooftop gutters that fill a cistern beside a building. But some farms gather much more water than a rooftop could by building a large-area surface on the ground that directs rainwater into an underground cistern.

Another option is drilling a borehole down below the water table to tap groundwater. Farmers may have the option of manual or diesel-powered borehole drills. We offer a webinar on a manual drilling overview led by Kerstin Danert at the Rural Water Supply Network and Susan Davis at Improve International.

Once a water source is established, farmers can use it in a drip irrigation system. Drip irrigation conserves water compared to sprinklers and flood systems. It delivers water at the ground level directly to the plants through perforations in the pipes or drip tape, reducing evaporation and runoff. Our Solutions Library lists a handful of systems for comparison.

Drip systems can be gravity fed. Farmers need to pump water from the stream, well, rainwater catchment cistern or artificial pond to raised towers above their fields. From there, the water flows down pipes through a drip irrigation system. But to get to the water tower, the farmers need a pump.

Our Solutions Library offers detailed information on manual, treadle, ram and other pumps that can be used to lift water from boreholes and to irrigation water towers above fields.

“Some of the most promising [technologies for farming drylands] are in fact not necessarily rocket science. The use of low-lift pumps in Sub-Saharan Africa has had a hugely significant adoption rate,” Roberto Lenton, Director of the Water for Food Institute at the University of Nebraska, said in an E4C Webinar.

“Kickstart has sold 250,000 low-lift pumps across the region for example. The general category of low-cost irrigation technology is really significant,” Lenton says.

An influx of new tools

The Israeli consultants in Kenya have supported the construction of all of these water delivery systems, including the drilling of 165 boreholes. Most of the wells draw water with handpumps, but a few are equipped with the relatively new technology of solar pumps. Solar pump designers are spinning out new prototypes and products at progressively lower costs, and they are one of the new technologies that we will examine in Part Two.

Sputtering diesel pumps are a common sight on Indian farms. The market is awash in low-cost and reliable 5hp Chinese models. But diesel prices have been rising, and so have carbon dioxide emissions. To lower costs and clean up farming practices, Greenpeace has challenged inventors worldwide to reimagine the irrigation pump. The eight-week Energy evolution challenge is in full tilt now with the deadline approaching Nov. 15. More than 70...