Improving the Professionalism of Drilled Water Wells in Africa – Want to Join Us? 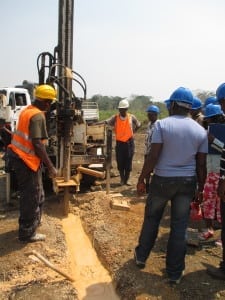 When I took on a consulting job to set up and lead a new theme for the Rural Water Supply Network (RWSN) back in 2004 I had no idea that twelve years later the subject would have attracted the attention of UNICEF, WaterAid and several African governments. To be honest, I did not realize the enormity of the topic at the time. In hindsight, that was probably a very good thing! Having just finished my PhD research, and still living in Uganda I was simply surprised (and delighted) to get an assignment that was paid by the World Bank (gulp).

It took time to really get to grips with what cost-effective boreholes might mean, and even longer to figure out what can be done to ensure that boreholes last for a lifetime. And I wonder whether the job of communicating what needs to be done might take a lifetime.

And so, over the years, with a bricolage of funding initially and with UNICEF emerging as the key supporter from 2008 onwards, we have tried a lot. An initial study of the Ethiopian drilling sector in 2006 provided a better understanding of what a healthy drilling sector actually is. Importantly, it clarified that comparing average drilling costs between (or within) countries is not very helpful. Every borehole is unique.

Subsequent studies in Burkina Faso, Ghana and Zambia provided the basis for RWSN’s Code of Practice – published in 2010. In hindsight our ambitions for such short studies in these three countries were rather high. But Zambia has picked up this agenda again, striving to raise professional standards starting with training.

We see a growing movement to raise professionalism in borehole drilling. And thank goodness that many are coming on board, for the task ahead is huge.

Eventually it became clear that the Code of Practice was not enough. So, over the course of three years, RWSN published guidance on siting, costing and pricing, supervision and procurement and contract management. We have essentially tried to just put good practice into black and white (and color).

So has the job been done? Apparently not. As I mentioned, communicating drilling professionalism to a wide audience is not all that simple. And so, with funding from WaterAid, UNICEF, Skat and the National Ground Water Association, we got into making animated films. There is now a series of three “cartoons” that should enable almost anyone to understand the importance of siting, supervision and why good drilling contract managers are superheroes.

RWSN and its partners are certainly not the only ones who have been concerned with these issues. There are initiatives in Kenya, to ensure a code of good conduct by drillers, in Uganda to licence drillers, not to mention the advocacy efforts of the Association of Waterwell Drilling Rig Owners and Practitioners (AWDROP), Nigeria.

There are many more initiatives out there that we have never even heard of. We see a growing movement to raise professionalism in borehole drilling. And thank goodness that many are coming on board, for the task ahead is huge. Can you imagine, for example, that in some countries, drillers (and even some consultants) are not paid for dry boreholes in difficult hydrogeological conditions? Do you know that at times, drilling tenders and contracts are prepared with no appreciation of the geology? Or that project targets are set without considering the cost of construction supervision? Yes, there is still a lot to do!

Many of those kindred spirits of a growing movement for water well drilling professionalism are members of RWSN’s Sustainable Groundwater Development Community. If you are interested, why don’t you also join?

Kerstin Danert is a rural water supply specialist at the Skat Foundation and she leads the secretariat of the Rural Water Supply Network.

Engineers Are Not Ending Poverty. Time for a Change?

Engineers have designed and deployed appropriate technologies that solve the problems of global poverty, but poverty persists. The abundance of quality, low-powered, low-cost devices, however ingeniously conceived, may not have made much of a dent in the number of people who earn less than (USD) $5 per day, Dr. Evan Thomas argues in the journal Sustainability. See Toward a New Field of Global Engineering in Sustainability 2019 Dr. Thomas, who...