Makers wanted: Inventor of the Hydro-Electric Barrel calls for prototypes 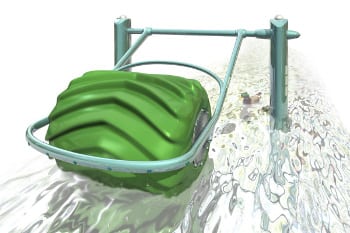 This rendering shows the concept of the hydro-electric barrel. Image courtesy of Mike Lowery

In the 1970s, Mike Lowery made a prototype for a whimsical-looking amphibious vehicle with a design flaw that, decades later, seeded his idea for a cheap hydro-power generator. His concept is called the Hydro-Electric Barrel, a floating water wheel that turns on top of a current to generate power using permanent magnet generators. Now, Lowery, a retired engineer and inventor, is looking for teams around the world to help develop prototypes.

From beach craft to generator

The idea started with a prototype of a light one-seater amphibious vehicle for recreation or rescue. It placed a driver between three large, plastic spinning spheres. A pusher propeller scooted the thing along. Over land, it worked as planned, but over water, the spheres began to dive when Lowery opened it up to speeds faster than 4 mph. He had bumped into a principle called the Coanda Effect: The water flowing below the spheres curved around them and dragged them toward it.

This amphibious vehicle design sparked the idea for the hydro-electric barrel. Photo courtesy of Mike Lowery

To keep his craft afloat, Lowery experimented with tread designs. He hit on the chevron—the inverted “V”—and found that it allowed spheres to rotate on the water surface at up to 16mph without diving. Fast forward to this decade, and Lowery is putting the spinning tread design to work to generate electricity. He attached a brushless permanent magnet generator inside a plastic barrel with the chevron tread. The barrel spins on a free axis on the surface of flowing water, generating electricity. A variation on the design could be used at sea to drive a second kind of generator as it rises and falls with the waves.

A call for prototypes

Lowery hasn’t worked out all of the design problems. For example, in a slow current, the device may need gears to operate at low speeds. It may also need a valve to regulate its internal pressure and maintain firmness even as the temperature changes.

To help work out the unknowns, and to further test the concept, Lowery is calling for prototyping teams from the around the world. One designer in the United States has a prototype underway, and should post an online video of the machine in action sometime soon, Lowery says.

Lowery would like for others to work with the concept, too. The basic components of the design are the generators, the barrel, and the frame. There are variables in all three. The generators could be off the shelf and the frame is up to the designers. The barrel size and possibly the materials can change, but the tread pattern and basic concept are constants.

High-density polystyrene (Styrofoam) may work for prototypes, Lowery says. He made a rudimentary generator using Styrofoam for the barrel, electric motors from a remote-controlled toy car and a frame  of pinewood.

The transition to clean energy is held up by the fossil fuel sector, not by any technical mystery, Dr. Jeffrey Sachs said at the Movin’ On Summit this month. “The big problem is not that we lack the ‘what to do.’ Because we know how to move to wind, solar, hydro other zero-carbon energy sources. We have great leadership in zero-carbon mobility,” Dr. Sachs says. Dr. Sachs, who is President...