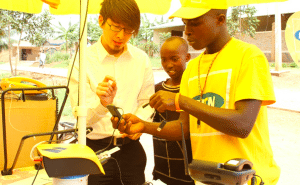 Michael Lin (left) speaks with an entrepreneur about ReadySet in Rwanda. Photo courtesy of Fenix International

Last year our news blog left off with a ReadySet cliffhanger. Fenix International’s lead-acid, rechargeable battery was poised to debut in markets in rural Africa with an untested business model. The idea was to piggyback off of mobile phone service carriers who would sell the battery and its solar panel alongside their phones as a recharging solution for off-grid communities.

The plan appears to be working. Last year, Fenix International sold about 2000 units. That plan is still on track and ReadySet was conceived with developing economies in mind. But a good battery will have buyers everywhere.

Last week, the San Francisco-based company launched a Kickstarter campaign to break into the US market. Fenix soared past its $20,000 goal on the first day. In just one week, by the time of this writing, the Internet has showered Fenix with more than $65,000.

“Our goal is to pre-sell 100 ReadySet solar kits and build a community of hardware developers, ‘makers’ and ‘hackers’ and empower them with the tools to build new products for off-grid-living,” Michael Lin, Fenix’s founder, told E4C.

Lin envisions an independent industry of inventors who develop hardware to plug into the ReadySet (or other similar batteries as the market expands). The idea is analogous to app makers who make mobile devices more useful. 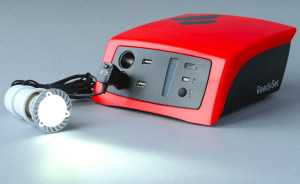 ReadySet and the LED lamp included in its kit. Photo courtesy of Fenix International

ReadySet is an apt platform for hardware development. It’s the size of a car battery and plugs into just about anything with a 12-volt cigar lighter adapter and two five-volt USB ports. It stores 54 watt-hours of power and it has built-in surge and over-drain protection to extend its life usefulness. The kit comes with a 15-watt solar panel, and it can also charge in a wall outlet.

Plus, it’s cute. (We’ve used the word before and it can’t hurt to say it again.) Wrapped in a curvy, brightly colored shell, ReadySet has an effervescent look. It might be at home on a sunny shelf or even a campground.

As for hardware ideas, Lin lists micro-wind turbines, water purifiers and maybe even vaccine refrigerators (like this one on camel back). Fenix already has a bicycle power generator in the works. We saw a demonstration of that in San Francisco last year.

To the wish list, we could add a micro water turbine in a bucket, a treadle generator, and maybe some version of this sleek wave and running-water power generator that we reported on in 2010.

Whatever the device, this could be a worthwhile project for the E4C community. Hobbyists, design firms and professors, please take note.

We were uncertain about ReadySet’s future in Africa before its recent success there. The device costs about $150 each in African markets, which might raise eyebrows among people who live on just a few dollars per day. And its competition is a cheap used car battery. In fact, Fenix designed ReadySet as a safer, greener upgrade for those batteries.

In West African countries, small business owners have bought the device, offsetting its cost by charging customers to power their cellphones. It’s still early to rule on its prospects, but we’re interested to see if this idea works.

Power is scarce at medical centers in some of the world’s rural developing communities. Clinics with intermittent power, or that are off the grid entirely, can still provide basic care with the right devices. Some clever cordless designs have become effective substitutes for the energy-guzzling medical devices in the developed world. These are just ten of the dozens of devices that improve lives and even save lives without a wall...