An experienced soil analyst can discover clues about the dirt with little more than water, a jar and a knife. Soil varies from site to site, and those variations can affect the quality of compressed earth blocks used for construction. Too much clay makes blocks shrink when they dry, and too little makes blocks that crumble. With traditional tools, discovering a soil’s composition can be both an art and a science. But now that process is poised to enter the digital age.

A new algorithm and simpler soil tests in development now may soon improve the quality of compressed earth blocks by taking the guesswork out of their fabrication. 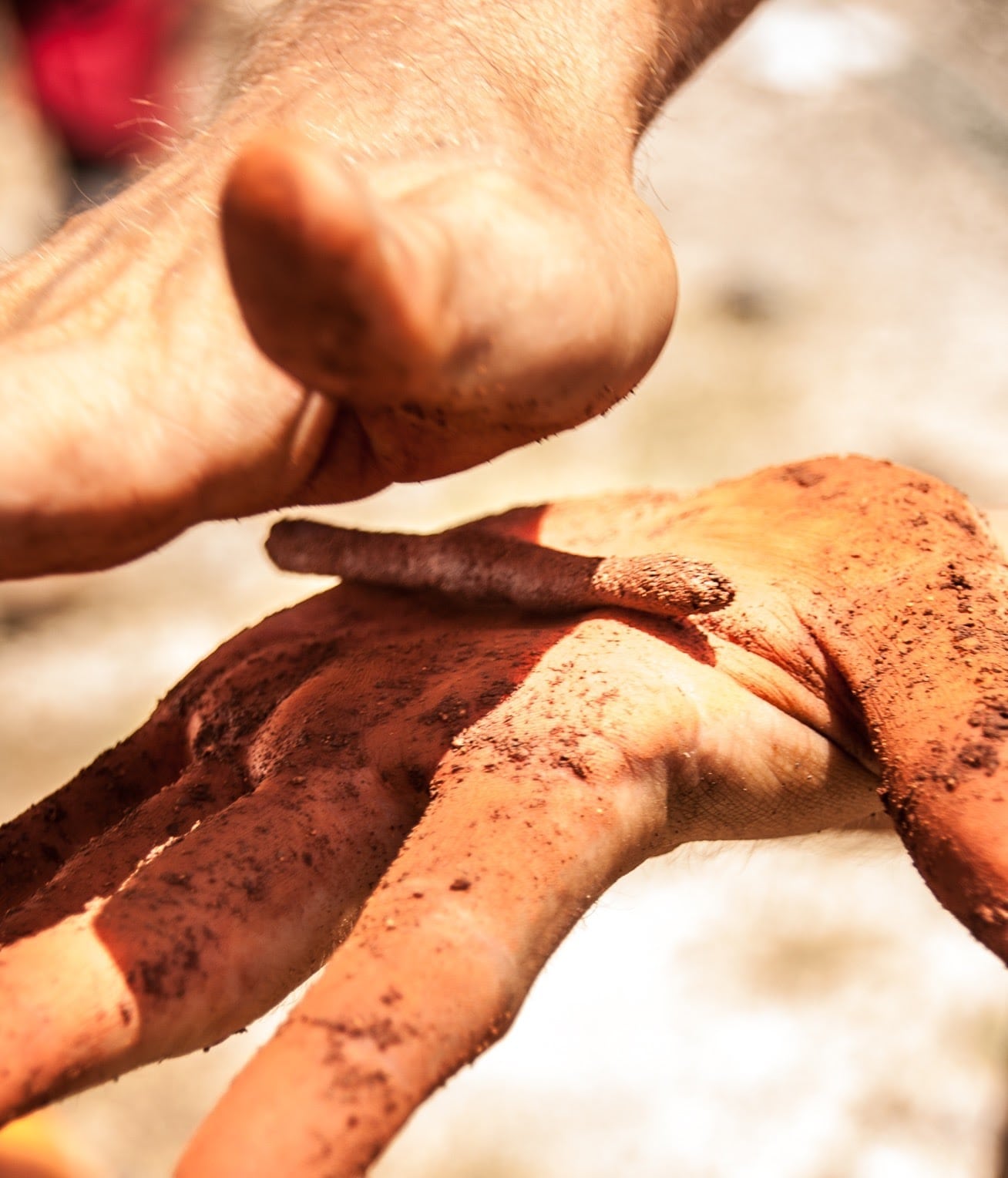 Rolling out moist soil like this can reveal a clue about its plasticity. Photo courtesy of Dwell Earth

Dwell Earth, a compressed earth construction and education venture, is collaborating with the Hunt Institute for Engineering and Humanity at Southern Methodist University in Dallas, Texas, to develop on-site soil tests and software. The combination gives a custom recipe for making blocks of even quality.

“We identified a great fragmentation in the knowledge of earth block material and we looked for a way to fill in that gap,” says Adam De Jong, who heads Dwell Earth. “We developed a kit to analyze and optimize soils wherever we are.”

Traditional soil analysis takes time. Sending samples to a laboratory is the most accurate method, but it is cumbersome, De Jong says. “Expensive and time consuming. And if you’re working abroad, there’s no access to soil analysis,” De Jong says.

The traditional onsite method is cheaper and most likely faster than mailing samples, but it is not as accurate. Stir the soil into a jar of water and the sand settles first, followed by the silt and then the clay, each in distinct layers. Measuring the width of the layers gives an indication of the ratios of each ingredient.

“That’s the old way, and it takes a long time and is not accurate,” De Jong says. “We changed that test, split the three materials from the soil using three test tubes and a couple of chemicals. It’s like a diluted soap. It breaks the surface tension, allows the sand, silt and clays to break apart from one another.” 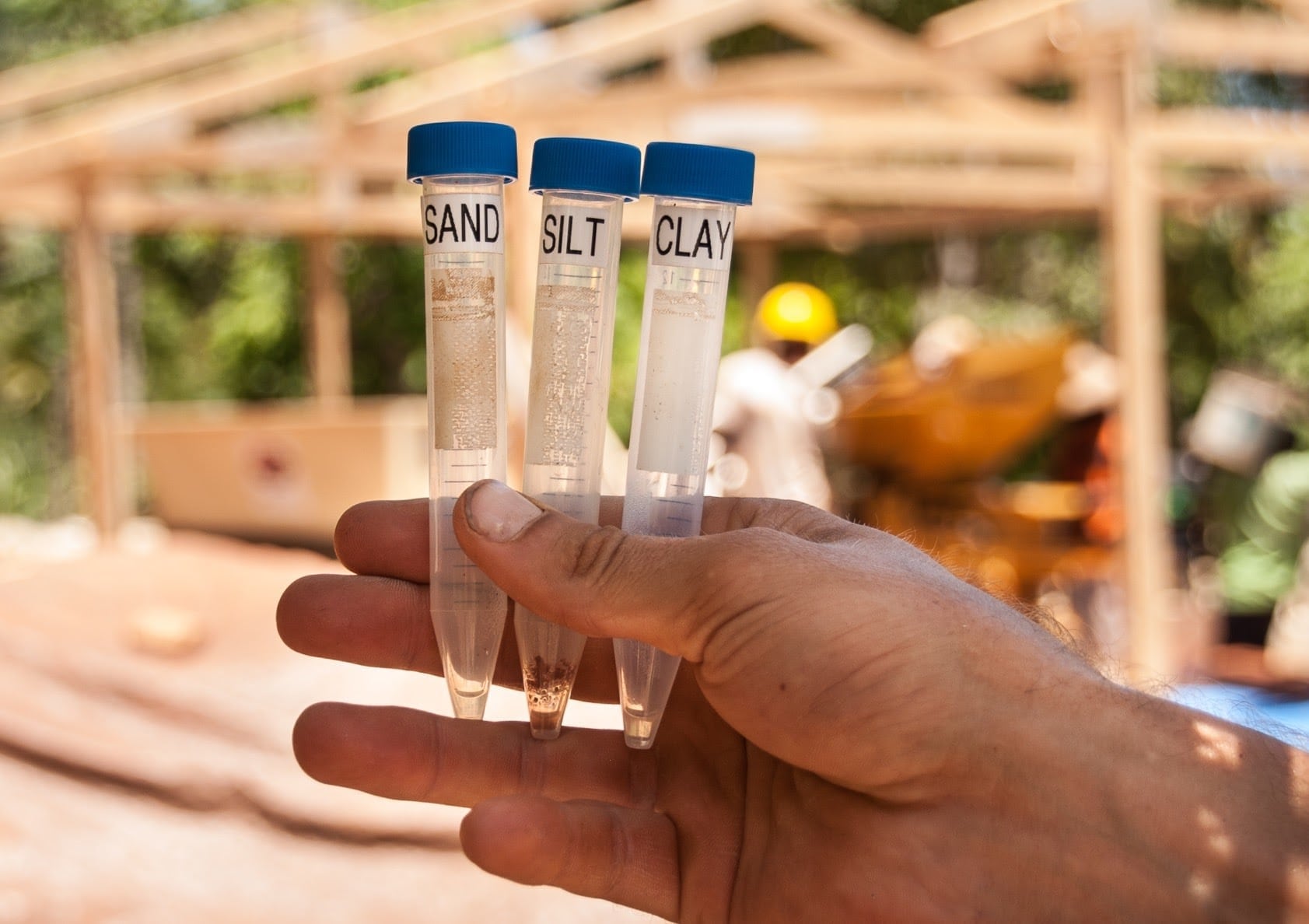 Dwell Earth’s test takes about 30 minutes, providing an accurate analysis of particle distribution in the soil. The sand settles in 30 seconds, leaving the silt and clay in suspension. Pour those solids in suspension into a second tube and let it sit for 30 minutes while the silt settles to the bottom, leaving only the clay in suspension in the water above. Pour the clay-water mixture into a third test tube to measure it, revealing the ratio of particles in the sample. The process has a near-perfect accuracy rate compared to gold-standard ASTM tests, De Jong says.

Test-tube results in hand, the soil analyst enters the measurements into fields on screen in the new compressed earth block building algorithm.

An art not lost

The new technology does not herald the end the age of the dirt-pinching connoisseur, however.

“We don’t do away with the qualitative tests, but we’ve added a lot of quantitative analysis,” De Jong says.

The software allows analysts to enter results from traditional field tests. For example, moisten a handful of soil and roll it out like dough to judge its plasticity. Stab the moist soil with a knife and note the amount of clay that sticks to the blade. That indicates the soil’s cohesiveness. Test the soil’s shrinkage by mixing it with water, pack it into a form and let it dry.

Once the measurements are entered, the software recommends a recipe for mixing a suitable soil for compressed earth blocks. To change a soil’s composition, add sand or mix in a soil with a different ratio of clay, sand and silt.

Earthen blocks can be cheaper and perform equal to or better than traditional materials. Well made blocks can have a compression strength of up to 17,000 kPa (2500 psi), while concrete blocks are usually rated at 13,100 kPa (1900 psi). Since the raw material comes right from the ground near the construction site, there is no need to ship bricks or lumber. All they require is a block press and cement or lime to bind the soil. They do not require firing, so they save trees and energy. Earthen walls can regulate temperatures, dampen sound, repel mold and if they are built well they can resist earthquakes.

Interested in building your own earthen-block home? Dwell Earth explains the process of making the blocks here: dwellearth.com/process. And see our pictorial construction guide with photos from a Dwell Earth work site: How to build a compressed earth block home.

“Kaukumbatie mnazi ukaupande, kazi uanze” (Embrace the coconut tree and climb it, start work) – mnazi Swahili proverb “The starting point for your coconut shell-based building materials program should be in the area of improved agronomy practices” – that was how the Chief Officer for Agriculture in one of Kenya’s Coastal counties welcomed us during a field visit directed at understanding the coconut value chain. Since 2008, Dr. Esther Obonyo,...

The business of COP 27 took place on buses, in queues and in chance encounters wandering among the pavilions. Those shared spaces where attendees...