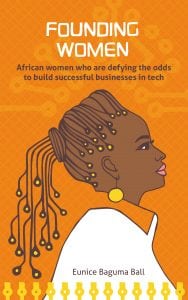 The following is an excerpt from the book Founding Women: African Women Who Are Defying the Odds to Build Successful Businesses in Tech. Printed here with permission.

Nneile is a mechanical engineer and social innovator whose vision is to transform healthcare in Africa. She is the Founder of iMed Tech, a medical innovation startup which produces prosthetics for cancer patients and burn victims. She has been recognized through a number of awards, including the presidential award for Science, Innovation and Technology at the 2017 South African Youth Awards, and was named one of Africa’s top female innovators at the World Economic Forum in 2016. Here she shares how her love for technology developed and some of the challenges she faced while setting up her business.

When did you develop an interest in science and technology?

My love for technology started back when I was in primary school. My school ran a science expo every year which challenged us to discover something scientific or technology driven. The winners would get the opportunity to showcase their innovation and represent the school at an inter-school competition. Initially, I got involved because it was just something fun to do outside of the normal school routine, but it eventually grew into a passion. Being surrounded by people who were involved in sciences also had a big influence on me. My brother is a mechanical engineer and many of my Mum’s close friends are academics: one is a chemistry professor and another a professor of genetics. Growing up listening to them piqued my curiosity and made me want to explore and be part of the science world.

What inspired you to become an entrepreneur?

Entrepreneurship has always been something I wanted to pursue. However, it took me years to discover exactly what business I wanted to start because I knew I did not want it to be something basic like buying and selling. I wanted to create something innovative. When I was an undergraduate, I remember most of my classmates had clear career goals and would talk about the companies they wanted to work for in the future. I always said, “Well, I’m going to build my own company and you guys can come and work for me: It sounded like a joke, especially because I was one of the very few girls in my class; but, years later, here I am running my own company.

When I was an undergraduate, I remember my classmates would talk about the companies they wanted to work for in the future. I always said, “Well, I’m going to build my own company and you guys can come and work for me: It sounded like a joke, especially because I was one of the very few girls in my class; but, years later, here I am running my own company.

Did your family support your decision to become an entrepreneur?

Yes, particularly my mum. When I decided to quit my job and start my business, she was one of the first people I spoke to. I remember her asking me, “Is this what you really want to do?” And when I said yes, she responded, “Then just do it.”

The first two years of starting my business were the hardest. I often went crying to her and she became my strongest support system. As an entrepreneur, it is so important to have people who support you not only financially, but emotionally as well. Surround yourself with people who appreciate your dreams and can look beyond the hard times to the vision you are trying to achieve. This was what my mum did for me.

How did the Idea for your company IMed Tech come about?

It started out as a research project for my Masters, and then I realized that the project could be translated into a commercial business. Whilst doing my research, I learnt that there was a dire need for innovative ways to produce medical prosthetics as there were many people in South Africa and across Africa who were losing limbs or other body parts due to diseases or accidents. I felt driven to do something about it, so I approached a number of people, including academics, medical doctors and others who could advise me on how to address this problem. I managed to get a lot of support because I think many of them recognized the urgent need for innovations in the healthcare space in South Africa.

Are there any particular challenges you faced or mistakes you made while building your business?

I made a whole lot of mistakes, particularly with money. I had some suppliers who outsourced services to different companies that were not able to fulfill their promises and ended up costing me a lot of money. Another big challenge I faced was finding the right people to join my team. As a startup, it is very difficult to find top quality people who are willing to take the risk and grow with you rather than going to a well-paying position at an established company. And sometimes when you do find people, they may not be the right fit. I made a poor hiring decision once and I had to learn the lesson of “be slow to hire and quick to fire”. It is not an easy thing to have to fire someone. It took me almost two weeks to build up the courage and I had to seek advice from more experienced business people on how to go about it. But in the end mistakes are just part of the learning process. Everything that happens makes you wiser and if I hadn’t made mistakes, I would not have learned as much as I did.

As a startup, it is very difficult to find top quality people who are willing to take the risk and grow with you rather than going to a well-paying position at an established company.

What achievement are you most proud of from your entrepreneurship journey so far?

Starting my business has been the most challenging but also the most rewarding experience of my life. I’m proud of the fact that in addition to establishing my business, I have been able to create opportunities for young women and men in the medical technologies field which is an area that is still under-explored in South Africa. It is humbling to know that I am creating a product which not only generates revenue but makes a difference in people’s lives, and that I am also educating and inspiring young people to follow in my footsteps. Another one of my biggest highlights is being recognized by the World Economic Forum as one of the top female innovators in Africa. It is not every day that one gets to be recognized within a continent as large as Africa, which has so many entrepreneurs who are doing amazing things.

What is your vision for your business going forward?

My vision is to fast track the development of high quality healthcare in Africa. As a business, we want to be the technology leader in the creation of medical prosthetics, going beyond breast and limb prosthetics to printing of internal organs. We also want to be an employer of choice for young graduates from the engineering and medical fields, as well as to help build a strong research unit to drive innovation in the health sector.

A low-cost solar fish pond aerator could boost yields in most of the world’s aquaculture operations. Most artificial ponds worldwide are on family farms and other small-scale operations in developing countries. There, traditional aerators that require electricity can be costly and impractical. This new device, created by a research team at the University of Toronto in Ontario, Canada, mixes pond water using heat from the sun. Its design sets it...