Research shows that the closer a person is to a safe source of water, the more safe water they are likely to consume, which is why the Sustainable Development Goals call for universal access to a safe source of water on premises. Until now, there has not been a cost-effective way to connect every household to water networks, particularly in rural areas. But the results of a digital finance pilot for water services in Ghana suggest that this may be about to change. 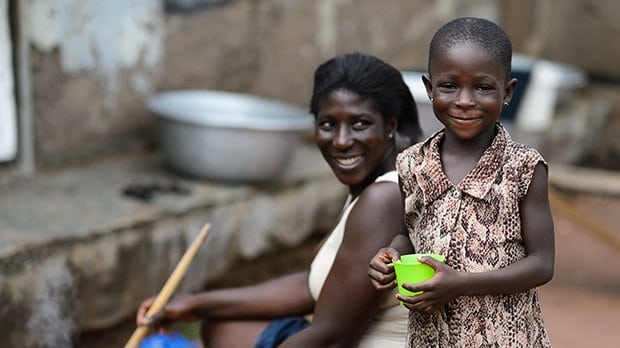 Safe Water Network is a non-governmental organization that serves peri-urban and rural communities in Ghana and India with safe, affordable water. In Ghana, where 8.3 million people lack clean water, Safe Water Network partners with local communities to build and operate water stations, and eventually transfer ownership of those stations to the local communities once they are able to operationally and financially sustain themselves. These water stations are micro-utilities, each with a centralized water source, treatment center and pump that distribute clean water directly to households or to communal standpipes, and can expand modularly to serve the population as it grows over time.

Digital payments and remote lockouts, the same technologies that make pay-as-you-go solar energy a success, can be applied to water and possibly other services.

Safe Water Network uses grants to fund its capital expenditures and sets water tariffs at a level where they cover the operational costs of pumping, treatment and maintenance. The last is crucial: A survey of 20 African countries shows that 36 percent of rural water points have stopped working.

Household connections should be Safe Water Network’s path to scale. Because having water directly piped into the home is so convenient, customers with household connections tend to use more water, and could subsidize public taps that serve lower-income users. But that has not been the reality. Collections for public taps are easy. A vendor sits in front of the tap and charges (USD) $.03 per bucket. No payment, no water. But until recently, all household connections were metered, with payment coming at the end of the month. The job of metering and collections fell to Safe Water Network station operators, who reported spending up to 25 percent of their time chasing payments. Property owners were often not home or didn’t have money at the time of collection. For 115 households examined before the digital finance pilot began, the average arrears had reached (USD) $33. This might not sound like much, but it is the equivalent to one-third of the year’s water consumption. For every dollar worth of water that Safe Water Network pumped to these households, it was collecting just 66 cents. Losses were unsustainable. To see if digital finance could turn the situation around, Safe Water Network joined the Consultative Group to Assist the Poor, or CGAP, a partnership of more than 30 organizations headquartered at the World Bank in Washington, DC (USA) and working for greater financial inclusion.

CGAP funded the pilot attempting to tackle two issues at once: arrears and physical collections. Eighty-nine households in two Ghanaian villages converted their water service from a monthly payment to a “pay-as-you-drink” system. The homes were equipped with prepaid “smart” meters that unlocked with SMS codes triggered by mobile payments. Mobile agents were already present in these communities, and more than 70 percent of the households had someone with a registered mobile wallet, although few used them for more than remittances.

During installation, Safe Water Network showed customers their new meters and explained how they worked. People were excited by the wireless keypads and fancy interface. However, the actual conversion came as a shock to some, because they went from receiving one water bill at the end of the month to paying for every liter upfront. Charles Yeboah, innovations manager for Safe Water Network, summed up the issue: “Before, our money was [sitting] with them. Now, their money is [sitting] with us.” Businesses that resold water (such as bars) had lost an informal source of working capital, but customers had gained valuable control over their consumption. Volumes dropped as households began monitoring their use more closely and cutting down on waste.

In time, an obstacle arose. Customers who had tried mobile payments initially fell back to old habits and called up the local operator to come collect their cash. In the first two weeks of the changeover, mobile money accounted for almost 50 percent of revenue. But there was a continuous drop from that point, with few customers showing a preference for mobile payments. 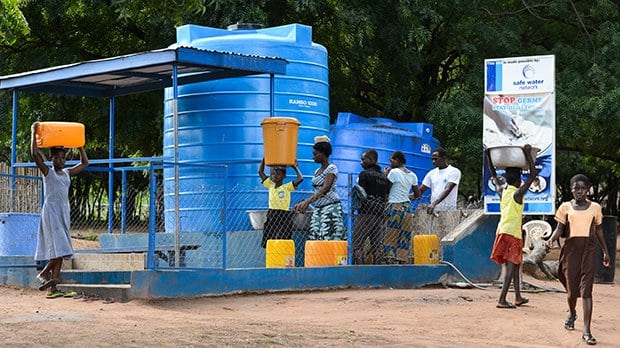 The lack of mobile payments was a concern, because it would inhibit future scaling of the technology. In partnership with MTN Ghana, Safe Water Network responded by launching a second campaign, this time to promote mobile payments. Facilitators reinforced the importance of clean water, walked users step-by-step through a mobile payment and emphasized the convenience of mobile payments, as opposed to waiting for an operator to come by and turn their water back on. The campaign worked: mobile transactions spiked shortly afterward and have stayed steady since.

Overall, the pay-as-you-drink solution has been a financial success for Safe Water Network and has potential to revolutionize water service provision. Comparing data from 2016 to that of 2017, and using a control set of villages for a difference-in-difference comparison, pilot households consumed 27 percent less water, and stations took in 18 percent more revenue. Safe Water Network went from collecting (USD) $0.0017 per bucket to (USD) $0.0038 per bucket, more than doubling its unit revenue. And operator time spent on collections fell from 12 hours per month to five hours, a 58 percent reduction.

Although it may not attract the same level of investment as PAYGo solar, this pilot shows that the same principles – digital payments, remote lockout – can be applied in other contexts, such as changing how water service is provided. Instead of stationing a collections agent at every public tap, and sending around a skilled operator to collect cash from houses, water service providers in rural areas can now install automated systems that are secure, safe and financially self-sufficient. Most households with a mobile phone will be able to access and pay for water in their own homes, bringing us one step closer to safe, sustainable water service for everyone.

A version of this article was originally published at CGAP’s site: Pay-As-You-Drink: Digital Finance and Smart Water Service