Rats are on the front lines of the tuberculosis fight 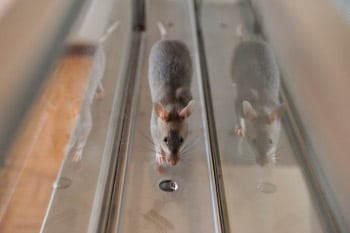 Rats patter along a run pocked with holes and sniff the sputum samples in the cavities below. When they detect tuberculosis in the mucous, they pause and sometimes scratch at the ground. Photo by Stuart Franklin

Predictably, the rats at APOPO have an image problem. At health centers in Tanzania, the organization with a Belgian acronym has trained African giant pouched rats to sniff out tuberculosis in mucous samples. Already, the rodents have ferreted out 2300 cases of tuberculosis that had slipped the attention of technicians examining the sputum with microscopes. Combined studies of samples from more than 20,000 patients at eight hospitals suggest that the rats can improve tuberculosis detection by 43 percent. They are many times faster than people and as cheap or cheaper than any other proven method of analysis.

For their cost, their efficacy and their availability in sub-Saharan Africa, these animals may be a uniquely appropriate technology. They are suited to clinics and other work, from landmine detection to patrols for illegal drugs and tobacco. If only they can shake their ratty reputations.

“We still face challenges in the general acceptance of our technique,” Bart Weetjens, who heads APOPO, told E4C. “A great deal of that is the general perception people have about rats.”

“Last year we were responsible for 10% of all cases of tuberculosis detected in capital of Tanzania, but we haven’t been mentioned in television reports. They consider it a marginal thing, but our impact is considerable.” 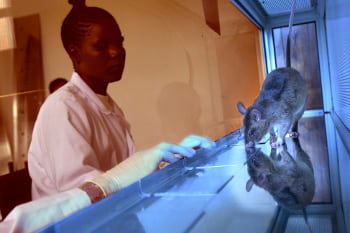 The rats in question are endemic to sub-Saharan Africa. Taxonomically, these are not true rats, but a related species unique to Africa (and Madagascar). They are eminently trainable – this house pet on YouTube is actually toilet-trained – and they live long enough to make training worthwhile. They live for about eight years, more than twice as long as the home-invading species that we love to hate. They also grow up to three feet (90cm) long nose-to-tail. Tallying food, living space and veterinary bills, the rats are cheap. They cost much less in upkeep than many other service animals, especially dogs.

The “pouched” part of their name refers to cheek pouches where they can store food. Importantly for tuberculosis patients, wild pouched rats also bury food underground to save it against leaner months. To find their storehouses once they’re buried, the rats rely on a refined sense of smell.

Weetjens drew on his childhood experience raising pet rats to surmise that the pouched rats could solve the landmine problem in Africa. As fur balls go, rats are cute pets, something most of us miss because of their image problem. They also have sharp noses and they’ll do a lot for a treat, Weetjens knew. He figured he could train them to sniff TNT.

With that in mind, he founded APOPO, short for Anti-Persoonsmijnen Ontmijnende ProductOntwikkeling, which, in Dutch means Landmine Detection Product Development. 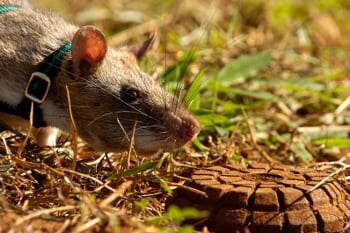 In the late 1990s, he began training rats in Belgium. Then, in 2000, he moved the operation to Morogoro, Tanzania, and forged partnerships with the Sokoine University of Agriculture and the Tanzanian People’s Defense Force. Within four years, APOPO had won accreditation with the International Mine Action Standards and in 2006 the rats were at work clearing suspected mine fields in Tanzania’s southern neighbor, Mozambique. Mines are a legacy from Mozambique’s two civil wars, and they render swathes of the country’s land unusable for farming or other development.

Rats in harnesses tethered to lines scurry across the suspected mine fields sniffing for TNT. If they smell something suspicious, they’ll pause for five seconds and often scratch at the ground, signaling to their handlers. Then they’ll run back for a banana or fruit puree while people with metal detectors confirm the find. With that method, APOPO’s teams have cleared more than 600 acres (2.5 million square meters) of land in Mozambique and found more than 1000 mines and thousands of other explosive devices that could cause harm.

Two rats with their handlers can clear more than 3000 square feet (300 square meters) of land in one hour, while two people with metal detectors might spend two days covering that area. And they work for about half of the cost: The international average cost of demining is $2 for 10 square feet (1 square meter), but the rats can do the same area for an average cost of $1.10.

It is not known if the rats have a better sense of smell than bomb-detecting dogs, but they are cheaper. Another advantage they have over dogs is that they don’t bond to one particular handler. APOPO can train rats in Tanzania and ship them to Mozambique or Thailand, where the organization is beginning mine detection work, or anywhere else. When they arrive, the animals will work with unfamiliar handlers as long as the people use familiar techniques.

For many of the same reasons that the rats excel at mine detection, they can also perform well in clinics. While fielding its bomb sniffers, APOPO had also begun training rats to find tuberculosis.

One-third of the world is infected

One-third of the world has tuberculosis, the World Health Organization reports, but the disease-causing microbes are dormant in most people. The bacilli become active in up to 10 percent of those infected, and a much higher percentage of people who are also infected with HIV. The two diseases often go hand in hand. 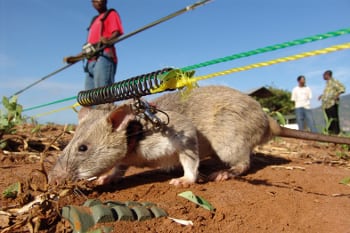 To detect the disease, Tanzanian technicians examine patients’ mucous samples under microscope. In one day, one person can examine about 40 samples.

Trained rats could do it much faster, Weetjens proposed. To test the theory, he and teams of researchers conducted studies in eight Tanzanian hospitals. They ran groups of eight, nine or ten rats past more than 22,000 sputum samples, each of which had already been under a microscope. The rats found more than 700 additional cases that had gone undetected by microscopy, the researchers reported in the PanAfrican Medical Journal in July.

Using rats as a second line of analysis boosted the detection rate by 43 percent, the researchers found. That’s important, Weetjens points out, not only for the infected patients, but for also for anyone who spends time with them. Each untreated person with active tuberculosis infects an average of 10-15 people per year, the WHO estimates.

Rats to the rescue

With all of their success, the rats have yet to win over hearts and minds.

He and APOPO have taken the role of the rats’ public relations firm, trying to shift public perception to the idea that the animals are not vermin but rather they are life savers. To that end, they call their animals HeroRATS. APOPO set up HeroRAT “adoption” programs for donors to finance the training and upkeep of a rat.

Hero Rats: Landmine and tuberculosis detectors. By The Economist

Rats in the future

With help from APOPO and the other demining crews in Mozambique, the country is on track for full demining by 2014. The rats have already begun work in Thailand and the program is gaining traction with potential worldwide. In health clinics, the future is not so clear. Casting the rodents as heroes has been a hard sell for a skeptical Tanzanian health department. But the studies are powerful convincers.

“With a new technology like this one, the public health community is reluctant and will dwell on everything that is wrong,” Weetjens says. However, “In the end, we will win this game because our data are quite compelling.”

How E4C can help

APOPO makes its designs in house, and there’s a lot of engineering involved, Weetjens says. That’s where our community can contribute. One of the challenges the clinics face now is how to transport and store sputum samples. Now, they are transported in refrigerated boxes and stored in freezers at the clinics. But power is intermittent. Proposals include freeze drying and solar-powered refrigerators, but, as always, the cost is the limiting factor.

We can also contribute with donations. See APOPO’s site for more information.

Engineering Gives Me a Chance to Make the World Better

Editor’s note: This profile of an engineer is a contribution to Engineering for Change courtesy of the international infrastructure and development consultancy SMEC Holdings, a member of the Surbana Jurong Group. For more profiles and interviews with thought leaders in engineering for global development, please see the tag ‘women in engineering.’ As an Environmental Engineer, Umul’s job is not limited to a desk or to 9-to-5 working hours. She spends her...

Findings from our latest membership survey suggest that Engineering for Change benefits a global community working in purposeful careers and advancing social impact. From...