Governments like to promote the good news and hide the bad, which made it unusual when Kenya’s first semiconductor factory was inaugurated in 2021. The facility on the 177-acre Dedan Kimathi University of Technology’s Science and Technology Park is heavily guarded and entry is restricted. Media queries are also not welcome. Even the official opening, presided over by Uhuru Kenyatta, Kenya’s president, was not announced in advance.

But the factory—a public-private partnership between the university, local startup Semiconductor Technologies Limited, and 4Wave Inc, a nanotechnology firm based in Sterling, Va.—might well portend the start of a new phase in the nation’s economic development. Kenya’s economy has long been dependent on agriculture, small-scale and agricultural-based manufacturing, and its famous tourism sector. (In fact, Semiconductor Technologies Limited uses the tagline, “Where Silicon meets Savannah.”) The hope was that the semiconductor factory could be the beginning of a turn to a more diverse economy that can fetch revenue tech-based manufacturing.

“This is the dream some of us have for this country, our ability to become an industrialized nation, to be able to create good-quality and well-paying jobs for our young people,” Kenyatta said in a statement released to the press.

How the nations of Africa develop economically is a critically important issue in this century. The continent south of the Sahara Desert is home to more than 1 billion people and is projected to pass 2 billion by 2050. Although the population base already is on par with China or India, the World Bank estimates that the region’s aggregate gross domestic product was $1.7 trillion in 2020, compared to $14.7 trillion for China and $2.7 trillion for India.

While agriculture and natural resources have been the main exports for Sub-Saharan Africa, investment in high tech and digital technologies is beginning to build. According to GSMA, a global trade association representing mobile network operators, there are more than 350 tech hubs in the region, and cities such as Cape Town, South Africa, Lagos, Nigeria, and Nairobi, Kenya, have become recognized tech centers home to hundreds of startups, incubators, and maker spaces.

Across the continent, bets on high-tech manufacturing are being made. It remains to be seen if they will pay off. 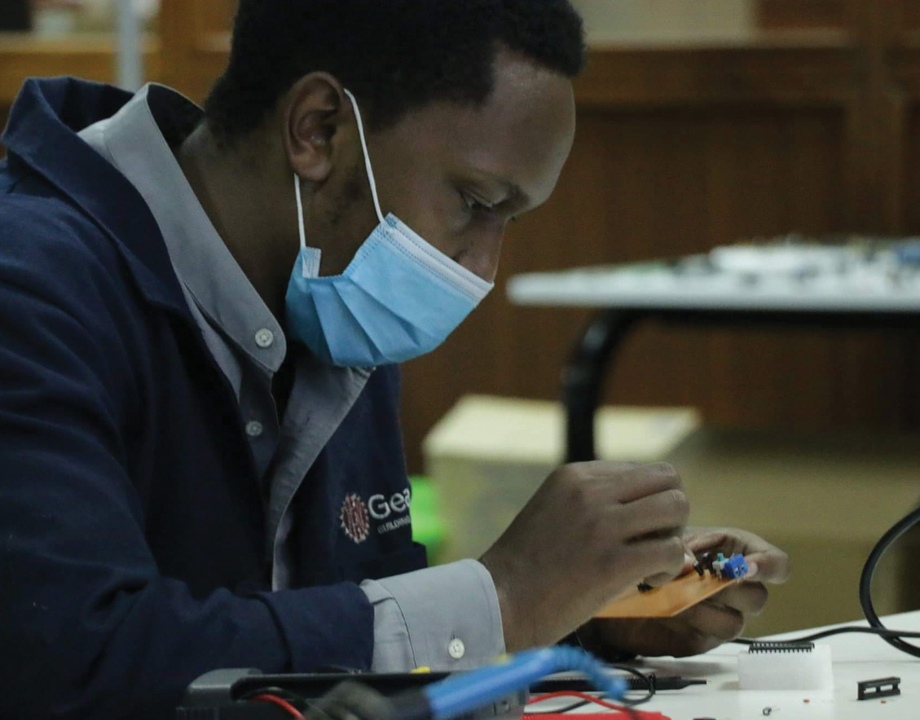 Manufacturing is key to Kenya’s economy, not only producing for the country but also exporting finished goods to the 15 countries in the East and Central Africa region. Despite that, manufacturing accounts for around 15 percent of employment in Kenya. As in much of Sub-Saharan Africa, most of those factories are industries such as food processing, textiles, and wood and paper goods.

While most of the engineers working in Kenya are employed in such factories as well as some energy projects, there exists a paradox. Data from the Kenya Engineering Board shows that there are at least 17,000 engineering graduates in the country, but the number that is practicing is barely a fifth that, which indicates most engineering graduates can’t find work as engineers.

One industrial sector that could absorb this reserve of engineers is technology and electronics. Already, there is a growing population of technicians in Kenya who are finding decent work on tech-based jobs at both the local universities as well the private sector. According to a 2018 report by the Kenya Association of Manufacturers, 61 companies were manufacturing electrical machinery and equipment (as well as energy generation equipment) and these companies directly employed 1,500 workers.

This sector could expand, especially into the semiconductor market. International Data Corp. forecasts the global semiconductor market will reach $600 billion by 2025. The demand is driven by mobile phones, notebooks, servers, automotive, smart home, gaming, wearables, and Wi-Fi access points. But that demand has been running into production bottlenecks, creating a worldwide shortage of computer chips which has affected the production in many industries, including U.S. automobile manufacturing. With the global demand for semiconductors increasing, companies have been on the lookout for cheaper alternatives.

Government and private-sector leaders in Kenya see the country as a future producer of semiconductors with an easy access to the African market.

Other African nations are moving in the same directions. On a busy street in downtown Addis Ababa, the capital of Ethiopia, a company that was relatively unknown a few years ago is working to make itself an international force in the technology sector. The Chinese company Transsion Holdings opened a factory near Addis Ababa in 2011 with the goal of competing in the African market against global mobile phone brands like Nokia, Samsung, and Apple. While it is still little known in Europe, Asia, and North America, the company is the leading seller of mobile phones in Africa. Its three brands—Techno, Itel, and Infinix—dominate the market.

At the plant in ICT Park, an information industrial park built by the Ethiopian government, workers assemble and test different components of mobile phones mainly from the three brands. According to the company, 90 percent of the workers at the factory are local hires. In addition, the company says it adapts its mobile phones to the needs of the African market. For instance, consumers often use multiple SIM cards to navigate the fractured local telecom markets, so the phones offered by Transsion feature dual SIM card slots to enable faster switching between networks. To help phone users who are not fluent in English or French, the company supports local languages, including an Amharic keyboard for the Ethiopian market.

For technology companies, Ethiopia’s advantage is the large number of science, technology, engineering, and mathematics-educated graduates. In 2017, a World Bank report showed that overall enrollment in higher education facilities had multiplied fivefold since 2005, with the number of public institutions increasing from eight to 36 in that same period. The government has also implemented a 70:30 higher education policy—training 70 percent of students in technology and science compared to only 30 percent in social science and humanities, according to Ethiopia’s Minister of Science Technology and Innovation.

Investment in innovation is occurring in other parts of Sub-Saharan Africa. Nigeria, which has long been dependent on its vast petroleum resources, is leading in the adoption of technology in its financial sector. The fintech industry has been on the rise with government statistics showing the sector has been averaging a contribution of at least 14 percent to the national economy in 2020. Nigeria’s information and communication technology (ICT) sector has grown from less than 1 percent of GDP in 2001 to more than 15 percent in 2020 with 55 active tech hubs. 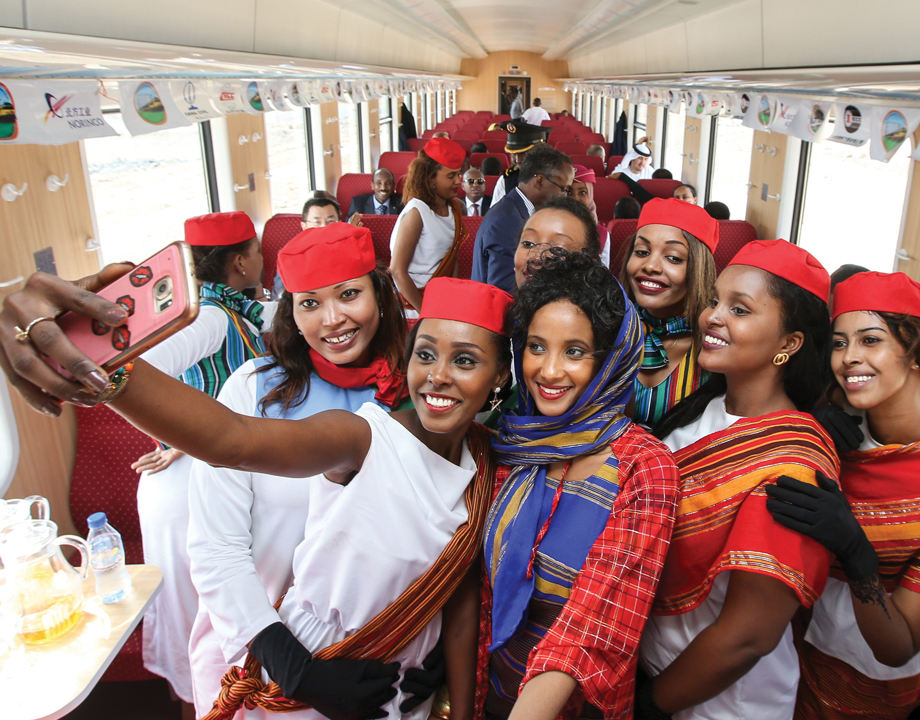 It’s not just software. A growing number of innovation hubs in Nigeria are dealing with the development of computer hardware and smart equipment like inverters, stabilizers, alarm systems, car security, and RFID door locks used by hotels and secured facilities.

Some countries have tried to attract foreign manufacturers through the establishment of industrial parks, or “techno-cities.” In Rwanda, there are plans for Kigali Innovation City, while the Hawassa Industrial Park, which was built south of Addis Ababa by Chinese firms in 2016, is already producing textiles for global demand, including PVH, a company known for marketing a diversified portfolio of brands including Calvin Klein and Tommy Hilfiger.

Many of these initiatives are inspired by the promise of Konza Techopolis. Mwai Kibaki, a London School of Economics-educated technocrat who became President of Kenya in 2002, saw technology as a sure way of transforming the country from an agriculture-based economy to a modern one that relies on science, technology, and engineering.

The signature project of his Kenya Vision 2030 program was Konza Technopolis, a 5,000-acre, $14-billion tech hub to be built southeast of Nairobi. The site was to be supplied with adequate power, reliable high-capacity internet, access to universities, and a rapid rail line for commuting from the capital, adding ambience to the savannah.

The initial hope was that global entities like IBM and Google would set up operations centers there.

While the Kenya Vision 2030 program saw some initial success, local politics and regime change has diluted the proposals. Kibaki left power in 2013, and little has been achieved since as the current regime moved to other priorities. Much of the Konza site is still undeveloped.

A more sustainable model may be the Gearbox hub, a 20,000-square-foot maker space in Nairobi where young engineers and innovators to develop prototypes for Kenya’s industries. Gearbox, founded by engineer Kamau Gachigi, enables inventors to access materials and equipment including 3D printers, laser cutters, and assembly machines through a membership model. The goal is for local engineers to be able to design working prototypes of inventions that can then be mass produced.

Eventually, these technology products could be manufactured locally. One local product is the Taifa laptop computer, which was designed by computer engineers at the Jomo Kenyatta University of Science and Technology. The laptop was conceived to meet the needs of Kenyan students and was well received when it was introduced in 2015.

Ultimately, while component manufacturing such as what Semiconductor Technologies Limited will be doing on its Dedan Kimathi factory is important, what consumers in Kenya want is the same as what consumers demand everywhere: access to finished technology goods. 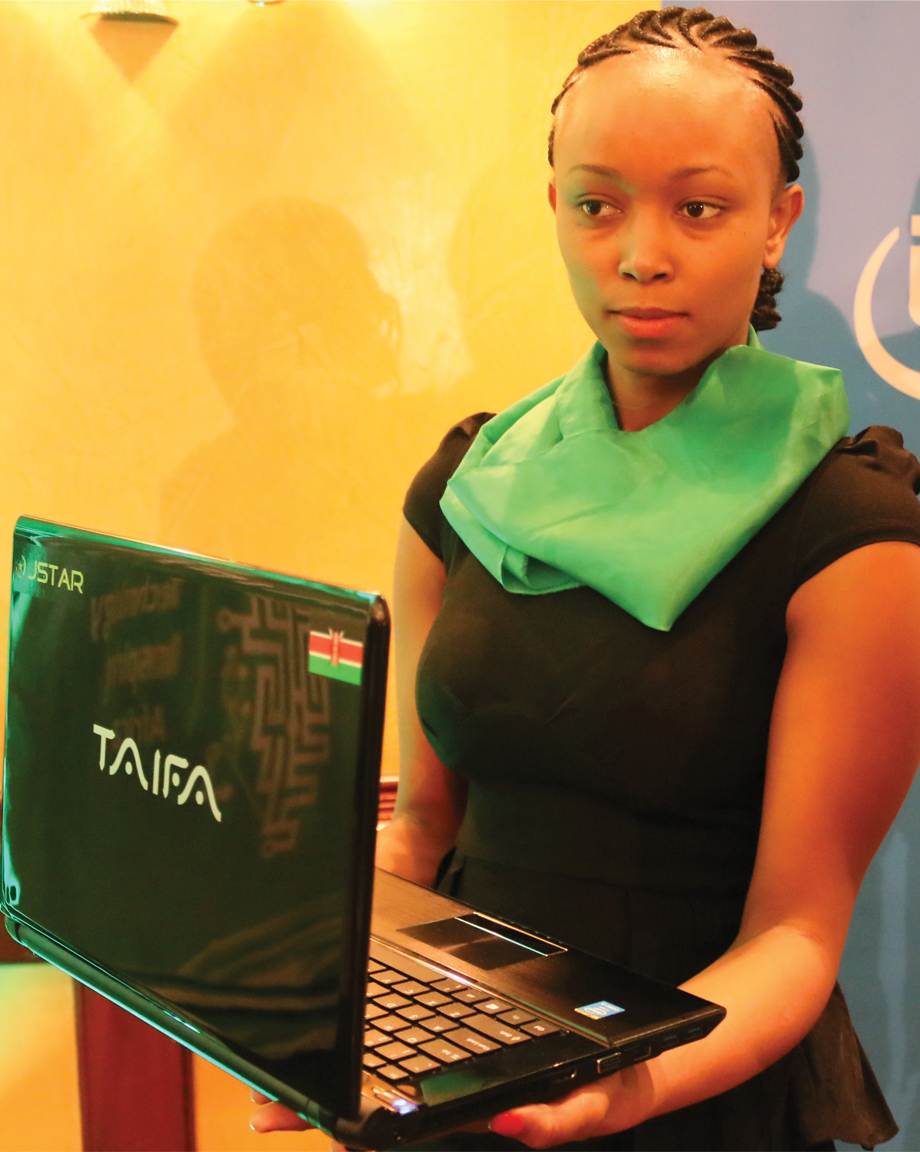 TAIFA LAPTOP, KENYA — The Taifa, designed with the needs of local students in mind, is built in Kenya. Photo: Jomo Kenyatta University of Science and Technology

Kimani Chege is a journalist based in Nairobi, Kenya, and the 2021 Editorial Fellow at Engineering for Change. Mr. Chege is a freelance journalist and a media trainer with DW Akademie, a branch of the German broadcaster Dutche Welle (DW), where he trains radio stations on financial management, new revenue streams and other topics. Previously, he was the coordinator of a science journalists association in Kenya.

We present our twice-monthly snapshot of interesting tweets in the technology for global development space. For up-to-the-minute updates from E4C on Twitter, please follow us at @Engineer4Change. Huh, interesting upbringing MT @jordanschermer: Love this intervew with a departing @DIVatUSAID staff (see Q4): http://divatusaid.tumblr.com/post/100664156812/an-interview-with-divs-peter-khaemba … — Engineering 4 Change (‏@engineer4change) October 31, 2014 The interview draws the curtain on some of the behind-the-scenes work of a consulting technician with one of...