Computer simulations, such as this model of snowmelt near Barrow, Alaska, can help improve the health and conservation of soil. This is how. Photo: Los Alamos National Laboratory (CC BY-NC-ND 2.0) 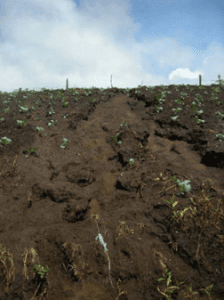 Soil erodes from a field of crops. Photo: Revilla, E.L. (see * below).

The soil is in trouble. About one-third of the world’s land is moderately to highly degraded, suffering from erosion, salinization, acidification or chemical pollution or some combination of those (FAO, 2015). Erosion in particular poses a major threat to global food security. Runoff carries away 25-40 billion tons of topsoil every year, reducing crop yields and impairing the soil’s ability to store and cycle carbon, nutrients, and water. This degradation of soil quality is a considerable setback to achieving the UN’s Sustainable Development Goal 2 in the 2030 agenda: Zero Hunger.

Software can help. Simulation software can predict erosion events before they occur.

Simulations can detect dangerous events such as landslides or factors that affect the stability of a surface, as shown in the images to the left. The software identifies the specific area technicians should address. It can then perform simulations of mitigation strategies, such as building dykes or spreading vegetal waste on the soil as a rain cover.

While simulation software is a useful tool for addressing soil erosion mitigation, there is still work left to do. Most existing tools are limited by the number of variables that can be inputted, such as heterogeneity of a surface, variability of rain velocity along a surface, and change of land use, which decreases the accuracy of the model and the ability for technicians to mitigate erosion-related risks. 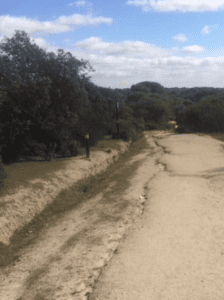 Two models that allow for a greater input of variables include:

There is a software tool that can account for some of the missing dimensions in the two listed above.

Computer Assisted Design (CAD) fluid simulation software could be a powerful tool for analyzing solutions to soil erosion. CAD is traditionally used in other fields such architecture, civil construction, or chain production. Soil conservationists, however, can repurpose applications built for other tasks. Namely, an application called Building Information Modelling (BIM) analyzes the effect of factors such as wind on city buildings, as shown in the image below.

What sets BIM apart from similar tools is that it analyzes not only the direction that the wind would take, but also the velocities that it will reach. By integrating a similar model into soil simulation, we take one more step toward the consideration of every important variable in predicting soil losses. This model could enable more effective interventions.

This image shows a simulated variation of wind vectors around a building, created in Autodesk CFD. Image: Churazova ,2019

It could help to develop more tools to mitigate soil erosion, but several barriers to implementation exist. One is the cost. The agriculture sector represents only 4 percent of the world’s total gross domestic product (The World Bank, 2017), suggesting that it may be difficult to incentivize the purchase of new software tools. GDP, however, is not always a good indicator of the viability of new investments. A cost-benefit analysis is needed to demonstrate how using these tools could ultimately be profitable for companies in the long run. In addition, companies should consider the impacts to people if they do not successfully detect and mitigate erosion risks. If they do not act, how will their inaction affect the ability to feed?

CAD simulation possibilities for soil simulation are still relatively unexplored. However, they are promising tools and should be further investigated for their ability to help address the issue of soil erosion and, ultimately, feeding the world’s population.

FAO, 2015, Soils are endangered, but the degradation can be rolled back,

NCRS, IA 2004, Choosing the Planning Area of a Field by “Dominant Critical Area”

A modular irrigation pump that grows with the farm

An experimental water pump starts small and builds up with modular upgrades. The base product is a single-cylinder hand pump. An add-on kit transforms it into a more-efficient foot-powered treadle pump. Then a third kit adds a second cylinder and lengthens the treadles for more pumping power and efficiency. Small-plot farmers can pay for more irrigating power as their farms grow and they earn money from their investment. “In the...