A Systemic Approach Towards Sanitation

Sewers are expensive, and their high cost is one of the biggest obstacles in the way of building toilets for every household in low- and middle-income countries. Cost is such an effective barrier in some countries that it is preventing significant portions of the population from access to basic sanitation. More than one-third of the people in Guatemala, a little less than 6 million people, lack basic sanitation. One startup may have a solution, however, that bypasses sewers and septic systems altogether: Mosan. Mosan is a circular sanitation service and transportable dry toilet for densely populated settlements and challenging environments. The company takes a systematic approach to sanitation. It is a technology-integrated chain that allows safe disposal of human excreta and its appropriate treatment.

In Guatemala, where Mosan is based, there is a clear gap between sanitation conditions in the city versus rural areas. Seventy percent of urban homes have access to basic services (water supply and drainage system), while only 30 percent of rural homes have access. Only four percent of the country’s 334 registered municipalities have water treatment plants. In some cases, these plants lack maintenance and the capacity to process all of the incoming wastewater. Consequently, most of the contaminated water is simply dumped into rivers or lakes; stimulating the growth of cyanobacteria and the eutrophication of lakes. 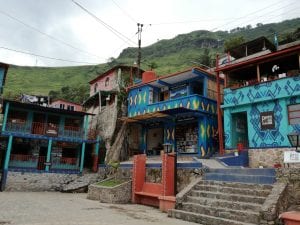 For this reason, sanitation problems need to be addressed sustainably. Constructing latrines or installing drainage systems may help mitigate open defecation, but these technologies will  never solve the problem at its roots. More than just a  dry toilet, Mosan is a comprehensive sanitation service, including a transformation process whereby urine and feces are separately collected, treated, and transformed. During the treatment stage, waste is transformed into fuel (such as biochar) and fertilizers for agriculture (such as struvite fertilizer). The products can be used directly by the community or sold to third parties, offsetting service costs and generating job opportunities. The process does not require expensive underground sewage infrastructure, and it supports a circular economy that reuses material that would otherwise have been tossed out.

Mosan got its start in 2010 when its founder, Mona Mijthab, worked as an industrial designer in flood-prone slums in Bangladesh. At first it was a research project, but after several pilots and collaborations with an array of institutions such as OXFAM; WSUP and MIT’s D-Lab, it became an award-winning solution. Today, Mosan is being implemented for the first time as a complete service system in Santa Catarina Palopó, in Guatemala.

This particular Mayan community is located on the shores of Lake Atitlan, where only about 20 of the roughly 1000 households are connected to the municipal sewage system. The majority discard wastewater into the lake or use latrines, septic tanks or simple pits that risk contaminating groundwater and aquifers. Mosan has running their service since September 2018 with a strong focus on raising awareness educating people in better hygiene. Creative capacity-building workshops and training sessions are organized frequently to establish a connection with potential users and create awareness. 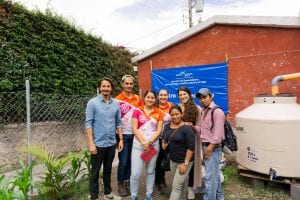 Rotaract Guatemala Sur club visiting a Mosan project. The author is third from the left.

Mosan does face challenges in establishing its service. Some include overcoming cultural barriers to discuss sanitation; gaining permission to operate, setting up the recollection and recycling system; analyzing manufacturing methods for local production of the toilets and tailoring the model to the specific local needs.

What’s next? After almost a year of research, development and service operations, Mosan has plans to expand its services in Guatemala. The company is exploring other communities with a need for sustainable sanitation and joining forces with municipalities and groups such as Rotaract (from Rotary International).

Mayarí Pérez is an Expert Research Fellow at E4C. She is a mechanical and industrial engineer from Guatemala and works at Universidad del Valle de Guatemala as a makerspace coordinator promoting innovation and technology.

The American Society of Mechanical Engineers’ Journal of Medical Devices made a special issue available free and open to the public until mid-April 2020. Medical Devices for Economically Disadvantaged People and Populations contains research on technologies designed to serve emerging markets and underserved communities in any country worldwide. In an introductory essay, Boris Rubinsky, a mechanical engineer at the University of California, Berkeley, pulls on two threads that will interest medical...

A wave-powered water desalinator, drones that plant mangroves and mobile greenhouses made our list of promising prototypes to watch this year. We dipped into...