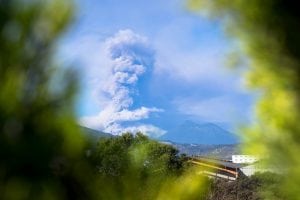 Fuego Volcano derives its name, Fire, from its frequent eruptions. Most are much smaller than the event on June 3, 2018. Photo: Marco Verch (CC 2.0)

On June 3rd, Guatemala’s Fuego volcano unleashed a pyroclastic flow of hot gas, ash and rocks that swept down the slopes flattening everything in its path. These flows are known to travel at an average speed of 100 km/h (62 mph), and little can resist their force. This particular one mixed with water from days of previous rainfall and rivers on the volcano’s slopes, making lahars. These lahars flowed for days, threatening a number of communities and cutting off many more. More than a million people were affected by the eruption, and close to 12,000 evacuated.

I saw so many stoic people break down when they explained what they had lost; from their entire lives’ work, to their entire family.

Guatemala is a disaster-prone territory visited every year by tropical storms and hurricanes from the Caribbean on the east and the Pacific on the west. Under its surface, two tectonic plates meet, cutting right across the length of the country. A third plate meets these other two just off the southern coast, making Guatemala a seismically active zone.

Despite a long history of natural catastrophes, there is no emergency plan in place or infrastructure to accommodate the evacuees. When Fuego erupted, community halls, churches, schools and even private homes opened their doors.

Techo is a non-profit, youth volunteer organization present in all of Latin America. Its goal is to overcome poverty. It has evolved over the years, but its housing program remains its strongest suit. In this crisis, Techo found the opportunity to contribute. The government approved Techo’s MHT, Módulos Habitacionales Transitorios, translated as transitional housing modules. Techo proposed to shelter the families awaiting a long-term solution.

Despite a long history of natural catastrophes, there is no emergency plan in place or infrastructure to accommodate the evacuees.

The first priority was information. Techo conducted a survey of 1284 different families. The results suggest that more than 2000 families from eight communities were affected. Six of those communities have been officially declared uninhabitable and the other two are awaiting resolution from the government.

Techo begins every housing project with a study of the communities where they plan to work, looking for the best way to benefit families. The government accepted the project plans after making changes to the survey, adding questions that interested different entities. Techo’s survey is the official census for many private and public institutions. The census was done in KoBo, an open-source toolbox for data collection. KoBo works in any browser in any smartphone, and only needs to be online the first time it loads the link.

Over the course of the first day of the census, I interviewed different families, discussing their lives before and after the disaster. The next weekend, I was in charge of a group of 10 volunteers as we moved from shelter to shelter. I saw so many stoic people break down when they explained what they had lost; from their entire lives’ work, to their entire family. 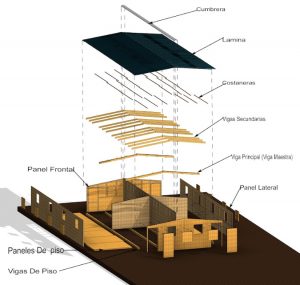 I interviewed Jaqueline Estrada, head of the Programs and Projects department at Techo and the Housing Program, about the design and the initial experience of working on the MHT.

When the disaster happened, she was in a Central American summit on housing and habitat. There were many people with relevant experience from many countries, and together they drew up a shelter designed to harbor the most people. When Jaqueline returned, she brought back lessons and a base design she adapted to the emergency. It was approved by different areas of Techo – Guatemala and Techo’s International Office in Chile.

The design’s goal was to shelter the greatest number of people possible while keeping costs down. This inspired the idea of modules. The final design was four Techo Houses, each 18m2 (194ft2), together. This way, Techo could use its established supply chain, while saving on materials and space. Only one panel is needed to separate two houses, so the four-house module uses fewer panels than four individual houses would require.

A foundational question: stilts or concrete?

The main material used is wood. It is easy to construct with and the families feel it’s safe. Many sawmills already know how to fabricate the panels and they transport them to the building site. The delivery time and manufacturing capacity varies from sawmill to sawmill, and Techo has various providers with experience.

Each module is 73.20m2, (790ft2) divided into four independent spaces for four families. Each space has three windows and a door, and is divided into two rooms.

Making a more solid foundation would give the illusion of a permanent home, but these modules are only meant to be used for six months to one year.

Jaqueline said that one of the greatest challenges was deciding on the foundations. We usually work with piles (stilts), but this takes a lot of time. Techo needed a design that they could complete in just a weekend with volunteers. It required 35 piles, so other methods and materials were discussed to find the best option. Using piles is also the best way to make a transitional module and for it to be accepted as one. Making a more solid foundation, such as concrete or steel, would require more investment in resources and give the illusion of a more permanent home, when these modules are only meant to be used for six months to one year. In this time, the government plans to implement a permanent solution. However, it is hoped the MHT will always be ready in case of another emergency.

We based the structural study off the normal houses we build. It was an analysis of loads and supports of the materials we would use. The design was validated by the other technical areas in Techo and third parties.

In the end, the piles were chosen and the Guatemalan army would dig the holes. This meant the volunteers would come in to finish the piles, which are secured with rammed earth and rocks, and put together the floor beams and start assembling the panels. A team of at 8-10 volunteers are necessary to construct a MHT over a weekend.

Each Techo project is built with a mixed group of staff and volunteers. The volunteers are divided in groups and assigned a leader from the staff. Building a MHT requires three or four leaders and volunteer groups. As of publication, 67 MHT are completed.

In addition to the MHT, Techo built 80 normal houses. These were funded by Cáritas, the humanitarian branch of the Catholic Church. There were some modifications to the original Techo house design to fit Cáritas’ requirements. Cáritas has been very involved in the whole process and are providing a lot of help. Constructions planned over the next few weekends should take the total to 130 MHT. Added to the 80 houses already built, more than 1000 families will benefit and move in soon to more dignified housing while they await a permanent solution.

Techo will construct all the MHT and houses with donated money. If you wish to contribute, you can find information in this link.

Ceci Mariscovetere is a Research Fellow at Engineering for Change and a mechatronics engineering student at Universidad del Valle de Guatemala. She is designing the power subsystem for Guatemala’s first satellite as her bachelor thesis. She is also a long-time volunteer at Techo, an organization that fights extreme poverty through transitional housing constructions, social programs, and connecting different social sectors to pursue a common goal. 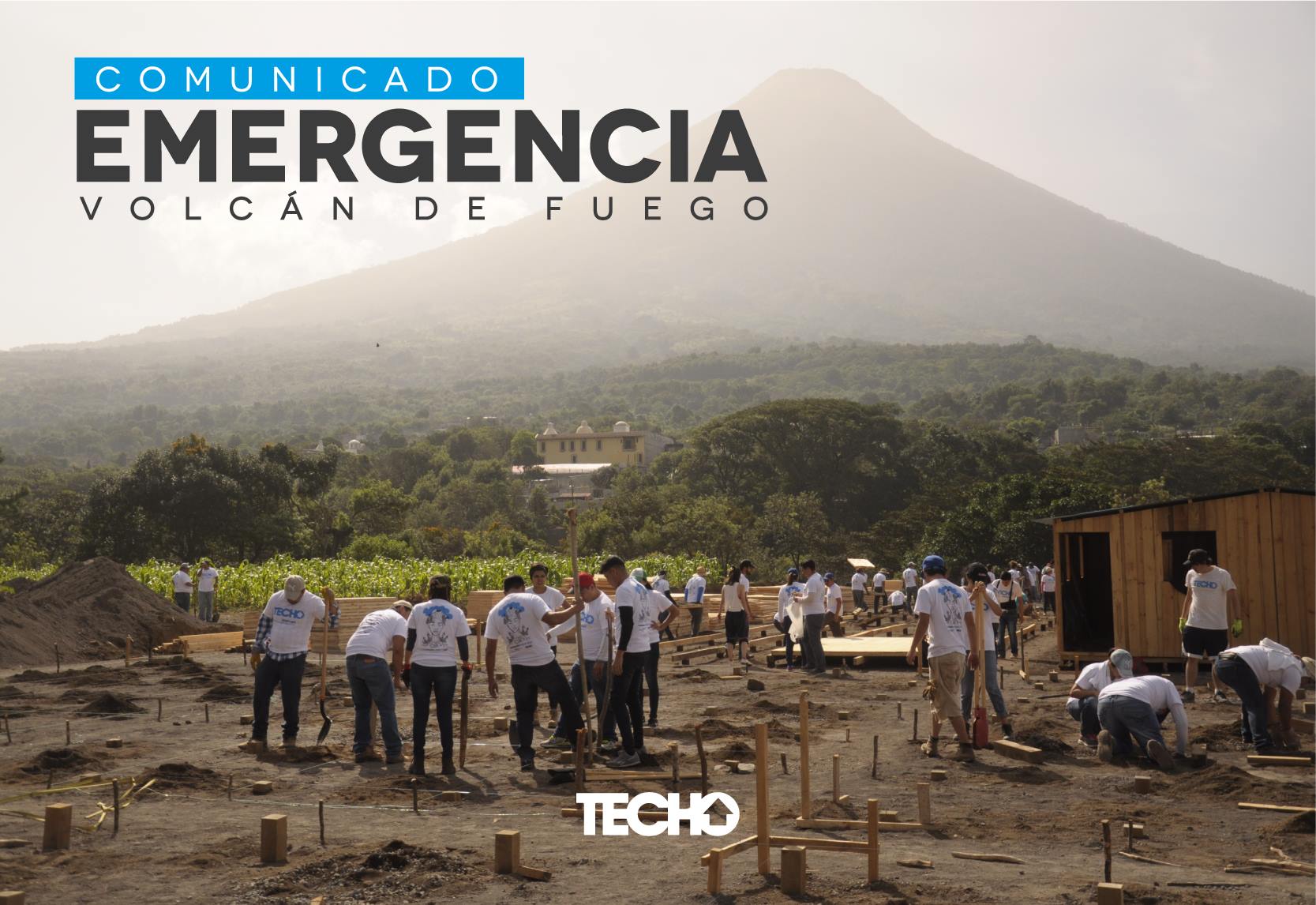 The Fellows Reveal a Promising Future for Technology for Good

Engineering for Change’s Research Fellows deepen our relevance and hold promise for the future of global development engineering. They displayed experience that spans cultures and disciplines on stage and in breakout sessions at the annual Impact.Engineered conference October 9th in Brooklyn, New York (USA). We’re proud to have been a small part of their journey as they are taking roles in global development organizations, universities and founding their own startups. These...