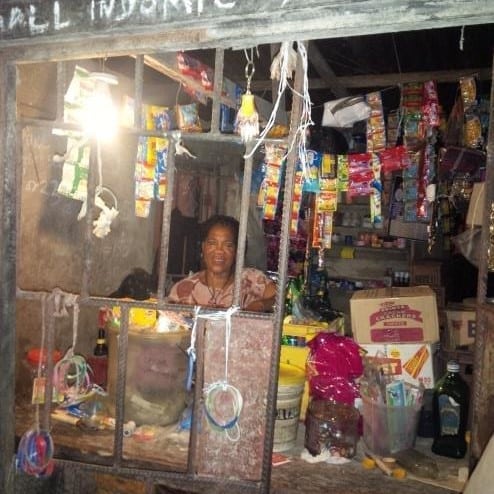 Felicia Eberechi and her husband own this convenience store, the only place to buy groceries in Egbeke, Nigeria. Now that the store has electricity, it has become a town social spot around the light at night. Eberechi now keeps the store open until 10pm and she said she has doubled her income. Photo courtesy of Ifeanyi Orajaka

Samuel Egbu used to pay 50 naira (US $0.32) to charge his phone battery in Umuagwu, a village in Rivers State, Nigeria. Or sometimes he would wait with his dead phone in the small crowds gathered around a neighbor’s portable generator. Electricity was scarce until solar power changed the community.

“Life used to be very difficult and uncomfortable in the village because there was no light. As soon as it is dusk, everybody retires to their houses,” Egbu says.

Now he charges his phone at his own home using a large rechargeable battery. The battery draws its charge from a solar photovoltaic array in the neighboring community of Egbeke.

The battery is part of a household kit that includes an LED lantern. With that, Egbu also has electric light instead of candles and kerosene lamps. And street lights, powered by the solar array, shine on the main street of Umuagwu for the first time.

“We now feel like we are living in the big cities,” Egbu says.

The PV array and the battery kit are part of an electrification pilot project by Green Village Electricity. GVE deploys this solar micro-grid and others to deliver power to households that are not connected to a central grid or large, traditional power plants. The Nigerian company uses technology and a business plan developed in the United States by IEEE Smart Village. Smart Village proposes to work with GVE and other partners to light up places like Umuagwu and Egbeke all over the world. The goal is to deliver electricity and educational services to 50 million people by 2025.

“Since we’re looking at 1.5 billion with inadequate access to electricity, we had to pick a big number,”says Ray Larsen, a Smart Village co-founder.

The project started small in Haiti after the earthquake in 2010. Larsen and his colleagues helped deliver 15 solar micro-grids in trailers to communities that had never been on a central power grid.

The power stations, which they called Sunblazers, shipped as kits of panels that produce 4 kilowatt hours of electricity per day, plus 40 – 80 12-volt lead-acid battery packs. Local technicians cut and welded frames and wired the panels. Then they hauled the finished products into remote communities where they powered homes through the battery packs. The kits were composed of almost entirely off-the-shelf parts configured for efficiency and portability.

Today, 10 of the units are still running. One of the original 15 was destroyed in a riot and the others are under repair after the heat and humidity rotted out the wood floors of their chassis. The poor mix of wood with a wet climate is one lesson learned from that first project.

Now Sunblazer is in its second and third generations, Sunblazer II and Sunblazer Lite. Both new models are lighter and more portable than the first prototype, and their panels are more efficient.

Sunblazer II includes six 300 watt panels that deliver 9kwh of electricity per day in equatorial sun. The panels store power in four station batteries that can charge a portable household battery pack in about four hours. The chassis is steel tubing with a floor of sealed plywood or steel.

Sunblazer Lite is about half the size and weight with two panels that deliver nearly 3kwh per day. It has a stainless steel frame and an enclosure of high-density polyethylene plastic,

The new models also include mostly off-the-shelf components, and the designs are intentionally fluid, open to adaptation to suit changing conditions in communities and countries around the world. Each station can expand to deploy more panels and charge more batteries.

“We have a modular generator. It can do anything. You can couple them together and drive big loads. We’re taking a broader look than just home lighting,” Larsen says. “We’re trying to be more than just a lighting company. We’re looking not just at lighting, but at clean water, water purification, education, refrigeration, pumping. We build somewhat larger systems to handle those loads.” 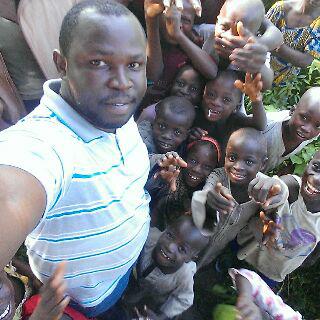 Ifeanyi Orajaka, co-founder of GVE, deploys solar micro-grids to remote villages in Nigeria. “Staying in those locations comes with its challenges but the joy that comes afterwards is worth the effort and sacrifices,” he says. Seeing the happiness of the community, especially of the children, including those in this photo, has been a driving force in his work, he says. Image courtesy of Orajaka

Smart Village has since branched into Kenya, Cameroon, South Sudan and, of course, Nigeria.

In Nigeria, GVE is deploying 24kW of solar power to three different villages, for a total of 72kW that put power in 200 homes. In September, Nigeria’s Bank of Industry invested more than US $675,000 in the company and Smart Village added an additional $65,500 to fund the pilot program. If it is successful, the Bank of Industry plans to fund an expansion that would reach 200,000 homes in the next five years, according to Ifeanyi Orajaka, chief executive officer of GVE.

“So far from the pilot projects we have deployed, the business model has proven to be very sustainable as well as very scalable,” Orajaka says

The service appears to be working, as customers spend less and receive more.

“Before now I spend about 450 naira daily (for 3 liters of fuel) but now I spend 200 naira and yet I have a better value for my money, I have longer hours of electricity and without generator noise and fumes,” one customer told Orajaka.

Orajaka and his co-founder, Chuka Eze, shot the video below. In it, you can see the power station in Egbeke and hear from new customers who have electricity in their homes for the first time.

Worldwide, researchers investigate solutions to solve our world’s greatest concerns, such as access to clean water, food security, and sustainable energy. However, research often focuses on the flashiest or more high-tech solutions, which may not be practical or affordable for low-income communities. At Engineering for Change, we believe that low-tech and low-cost solutions should be researched with the same vigor as high-tech products. To accomplish this, we’ve developed the Solutions...