There’s an amazing breadth of human-powered machines. There are brick presses, power generators, laundry machines, tree climbers and much more. Here we present a cross section of just a few of the hundreds or even thousands of machines that turn human power into efficient work. We pulled a representative sample from half a dozen sectors. You’ll also find links to product development sites and online repositories by other organizations that specialize in low-cost technology for global development. These are 10 human-powered machines for work, health and living. 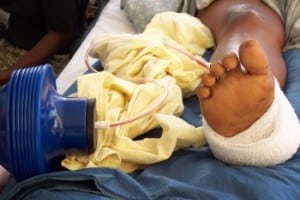 The Wound Pump performs in a field test in Haiti after the 2010 earthquake. Photo courtesy of Danielle Zurovcik

A hand-held plastic bellows pump, surgical tubing and a newly developed, air-tight wound dressing can triple the healing rate of wounds. Danielle Zurovcik’s Wound Pump is also much cheaper than the $25,000 negative pressure machines that it replaces. The Wound Pump needs no electricity, costs just a few dollars and it’s portable, making it practical in medical centers that have spotty power supplies and in emergency medicine in the field.

The pump applies slight but steady suction to certain kinds of wounds to stimulate the body to heal quickly and with less scarring. Zurovcik worked with doctors in the lab and in the field in Rwanda and Haiti, and she ultimately invented a new material for a dressing that doesn’t leak.

The Wound Pump is just one of dozens of low-cost, manual medical devices that are suitable for health care worldwide. See these resources for more. 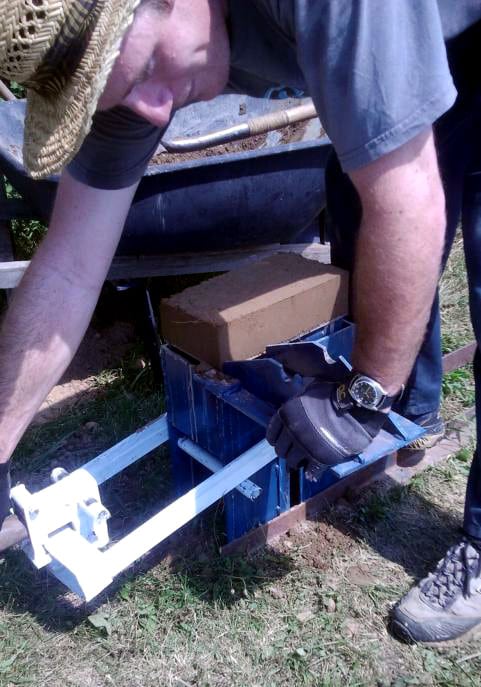 
About half of the world’s buildings are made of earth and a hand-operated earthen block press like this one fits into that tradition to deliver beautiful bricks for construction. Compressed-earth-block homes are earthquake resistant and soften temperature swings through day and night and hot and cold seasons. Earthen construction doesn’t sacrifice style, either.

A construction guide is available from permies.com. 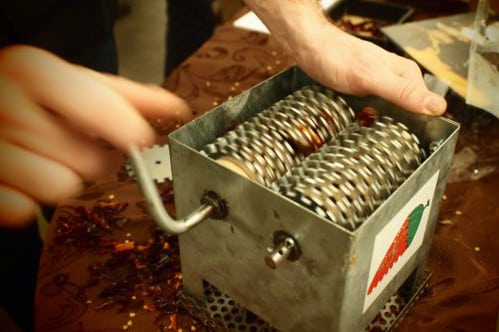 The Pepper Eater grinds the world’s most widely consumed spice into flakes and powder, adding value and prolonging the shelf life of the produce to boost incomes on small farms. Manual processing is usually done with a mortar and pestle, but the Pepper Eater speeds up the work. The latest prototype was tested with Ethiopian women in 2012 and pulverized peppers twice as fast as a mortar and pestle. Pepper Eater is an “emerging technology” in development at Compatible Technology International. We first saw it when its creators presented it at an E4C event in San Francisco. 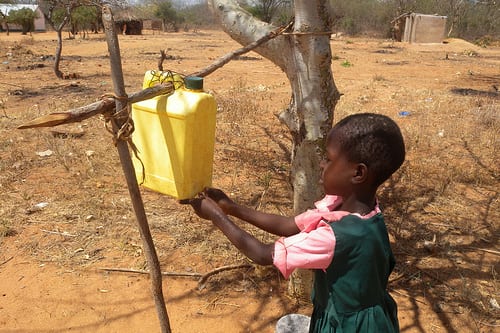 
Hand washing limits the spread of waterborne and other disease, and devices like this Tippy Tap make it easier where there are no taps. The Water and Sanitation Program provides construction guides and educational materials in Swahili and English. See WSP’s comic strip in Swahili showing how to make and use a Tippy Tap and soap on a rope (pdf), and WSP’s handwashing toolkit with radio announcements and downloadable fliers in Swahili. 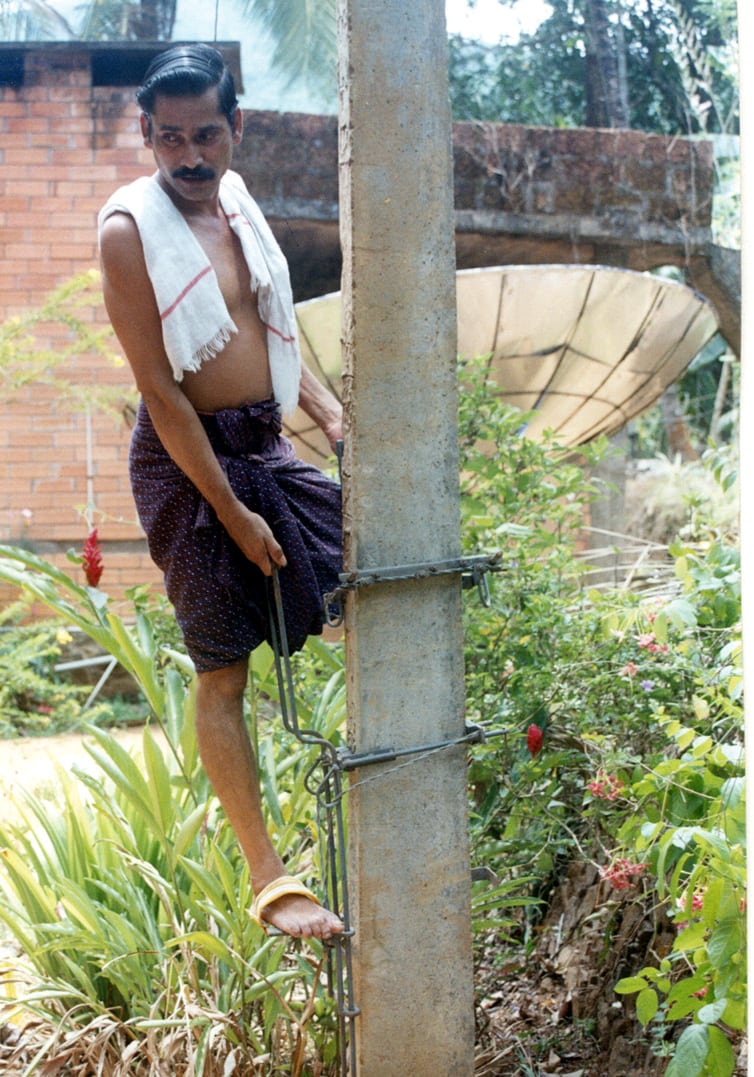 Coconut tree climbers are a rare breed in Kerala and other coconut-producing states of India, in part because the work is dangerous. But this device could take some of the risk out of the profession. A tree climber who went by the nickname Appachan created this system of metal loops and wire ropes on a rod that lets climbers sort of peddle their way up a coconut tree trunk. The Honey Bee Network and National Innovation Foundation – India feature the design in their innovation repositories. 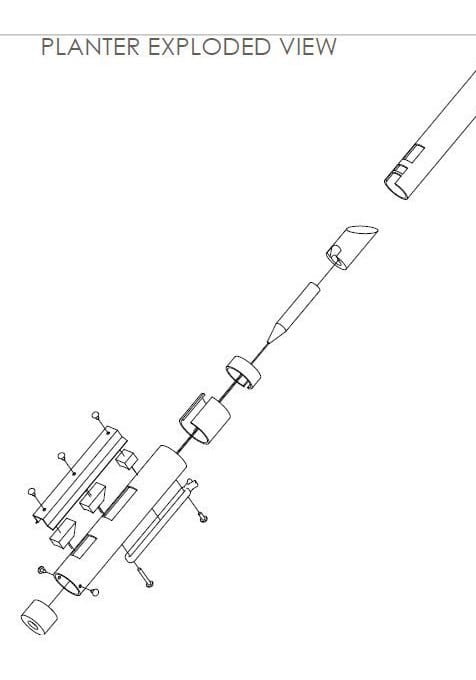 Gardeners and farmers can save their backs and plant seeds without stooping over when they use this handmade seed planter. Thai rice farmers had a hand in the design, but it can be used with seeds other than rice, too.

The seeder is built from low-cost materials – mostly PVC pipe and bamboo. And, if you have them, you can use power tools to make it, but hand tools, including a machete, will work fine, too. A research team at Drexel University in Philadelphia created the device

A research team from Drexel University in Philadelphia, Pennsylvania is developing the device, working with rice farmers in Bo Klua, a community in rural Thailand. Drexel partnered with a local Thai organization called the Sustainable Development Research Foundation and produced a construction guide in English and Thai. We put their pictorial guide on Instructables: 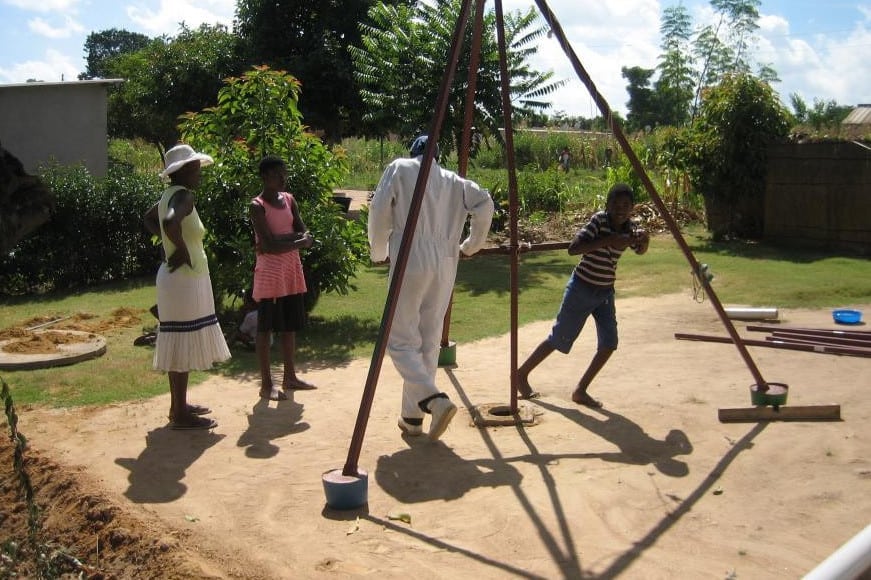 Manual drilling is trending in Sub-Saharan Africa. Estimates put the number of people on the continent who rely on boreholes with handpumps or on hand-dug wells at 150 million, up from 75 million 10 years ago, according to the Rural Water Supply Network. Here you see a team in Zimbabwe drilling a shallow tube well. RWSN offers a construction guide to the drill and a pump. 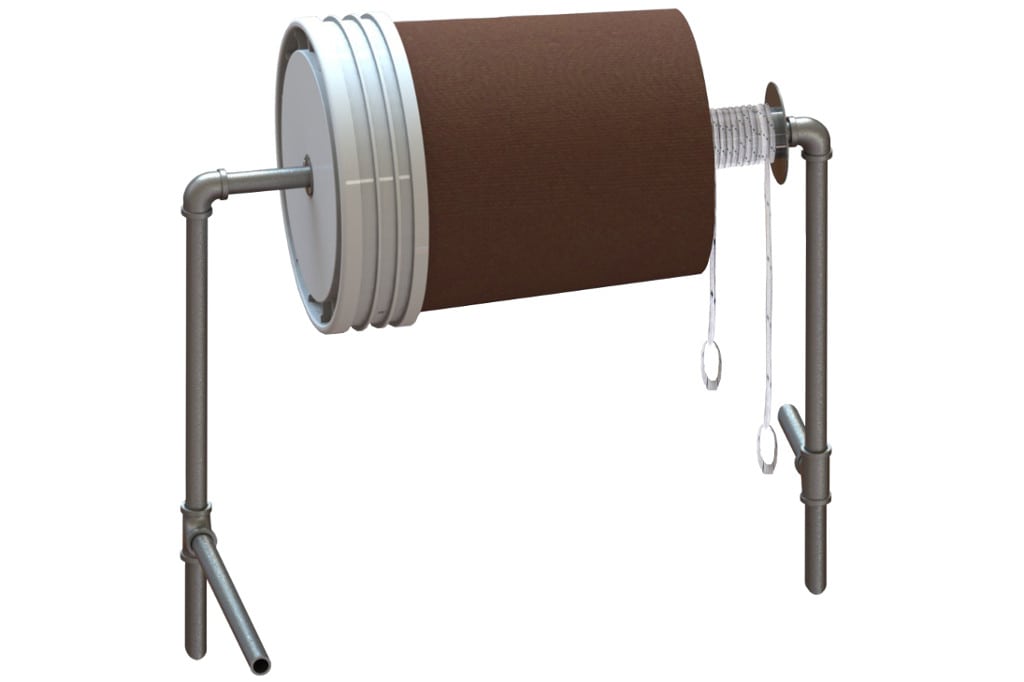 
As a laundry machine, this five-gallon bucket that spins on pieces of pipe might look the product of a trip to the junkyard. But its simplicity is deceptive.

The product’s designers took us through their creative process, from interviews with the people who might use it to months of prototype testing before they had an affordable product that could save time for off-grid clothes washing. Have a look: Foot-powered washing machine: From sketch to product. 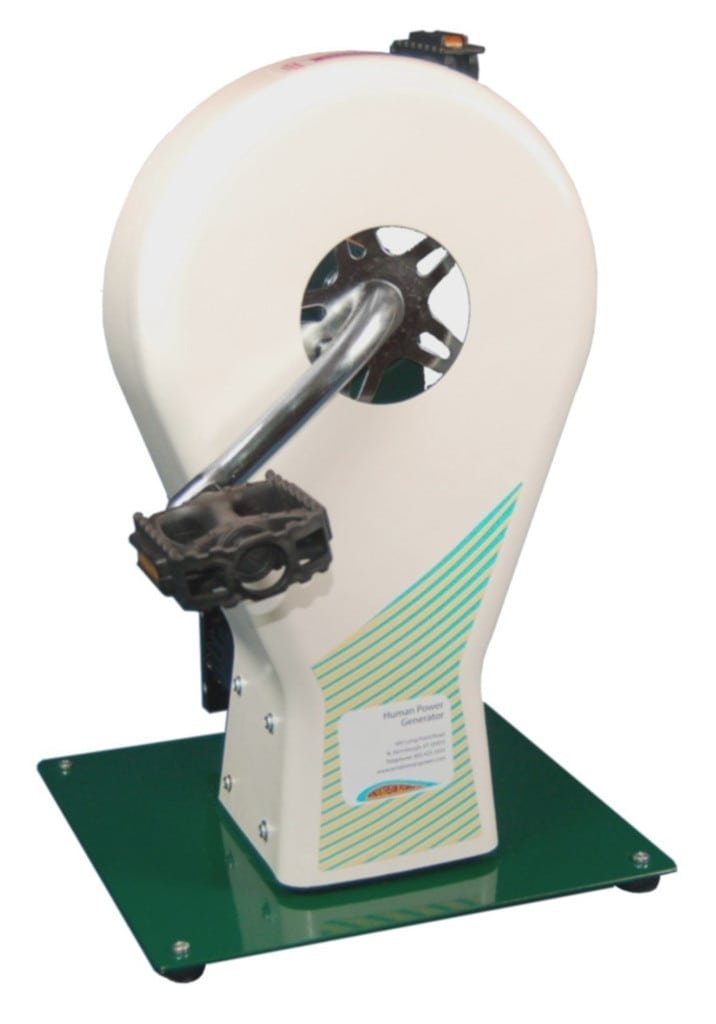 Human-powered generator  Windstream Power makes this hand-cranked or foot-pedaled power generator that is at work in research stations in Antarctica, schools in North American and powering radios in Siberia. It charges 3 – 5A when connected to a 12V battery and is suitable for emergency power and communications, off-grid power for water pumps and small appliances that require less than 65W and more. 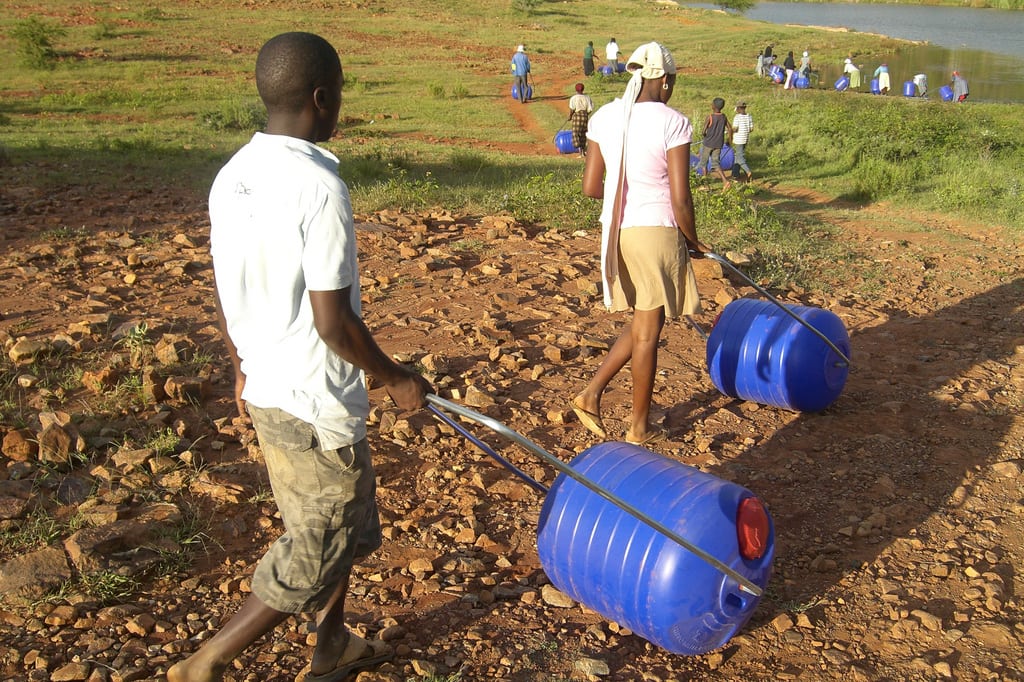 Compared to carrying a 20-liter (5-gallon) jerry can of water on your head from the river to the kitchen, the Hippo Roller is a huge time saver. The roller allows one person to carry 90 liters (24 gallons) of water, rolling it along the ground like a wheel. It was designed in South Africa and has been through 15 years of use and testing. For more, please see our Solutions Library or hipporoller.org.

There are so many more manual devices out there and some of them are noticeably absent from this roundup. Take the treadle pump, which has been a life saver on small farms around the world, or the rope pump, the bicycle trailer, the weed-cutting wheel, and even new devices on the horizon, like manual microfluidics for field diagnoses of disease or food contamination. This has been just a glimpse of the awesome variety of machines that enhance our muscle power.

The elderly and people with disabilities in low- and middle-income countries remain underserved with poor access to assistive technology. The lack of access to wheelchairs, prosthetic limbs and other devices hampers movement and disrupts and even prevents the performance of other basic tasks. Engineering for Change conducted an interview Angela Kohama, at Handicap International, to determine the state of assistive technology in low-income countries. Handicap International is a nonprofit that...