Power is scarce at medical centers in some of the world’s rural developing communities. Clinics with intermittent power, or that are off the grid entirely, can still provide basic care with the right devices. Some clever cordless designs have become effective substitutes for the energy-guzzling medical devices in the developed world. These are just ten of the dozens of devices that improve lives and even save lives without a wall socket.

For low-cost off-grid patient transportation, nothing beats a bicycle ambulance. Jessica Vechakul designed this one, the Zambulance, at MIT’s D-Lab. Plans are available at the Zambulance Web site. 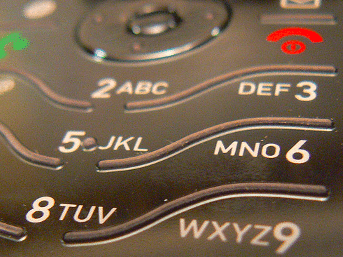 Mobile phones and digital data are streamlining healthcare in rural clinics, and Medic Mobile is one of the organizations that is pioneering the trend. Josh Nesbit, who heads the organization, puts patient data collection forms on mobile phones for hospital field workers in Malawi and other African countries.

Hospitals are digitizing their stacks of paper records and updating them with remote transmissions from cell-phone toting surveyors who go house to house talking to patients. Medic Mobile’s software conerts patient data to SMS messages and sends it to a central hospital for analysis and storage. The arrangement allows staff with minimal training to collect information and send it. And it saves the field workers a lot of walking: Before Medic Mobile, some workers walked 45 miles from the hospital and back to talk to patients. 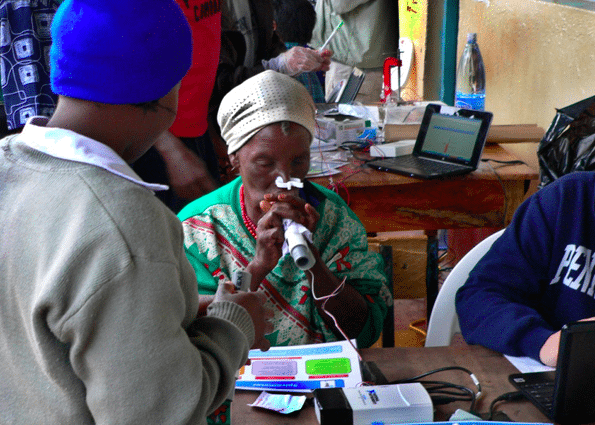 Telemedicine is filling a gap in healthcare at rural clinics that can’t afford to keep a doctor on staff. These low-cost diagnostic tools can transmit their data remotely to doctors who make a diagnosis. Neurosynaptics has fielded 400 units so far in Bangalore. Their suite of instruments includes an ECG, a blood pressure monitor, a digital stethoscope, a thermometer, a pulse oximeter and other tools.

A team at Pennsylvania State University also developed a contingent of diagnostic tools in a project they launched in Tanzania called Mashavu. Mashavu’s instruments plugs into standard cell phones to send data over a network of doctors worldwide who can make medical recommendations. 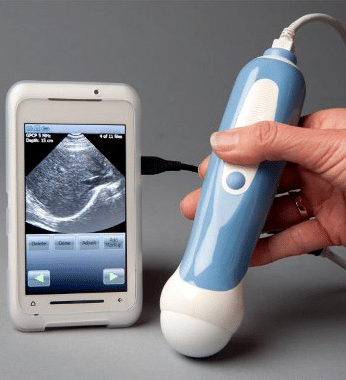 The mobile health start-up Mobisante has tied a modified ultrasound transducer to a smart phone with a software package that converts them into an ultrasound machine. Photo courtesy of Mobisante

Remember the tricorder? It was Star Trek’s multi-purpose sensor that, with a peripheral attachment, became a medical scanner. A version of that fictional space-age technology is now a real medical instrument that is low cost and practical in rural clinics. Transducers can plug into smart phones to form mobile ultrasound machines. These are hailed as the next stethoscope, meaning that, someday soon, a smartphone ultrasound machine in a belt pouch could be a sight as iconic as the stethoscope around the neck. We last wrote about Mobisante, a start-up mobile health company that developed one of the first such devices, and other companies have followed suit. This cheap, mobile technology has deep implications for healthcare in the United States and also in developing countries.

To augment a telemedicine tool kit, or to perform diagnosis in the field, Aydogan Ozcan and his lab at the University of California, Los Angeles, developed an add-on that turns a smart phone’s camera into picture-taking microscope. The device can augment a telemedicine tool kit, or perform diagnosis in the field. It allows poorly-equipped labs, rural clinics or other workers in the field to send photos of blood or water samples to an expert for evaluation. The Lenseless Ultra-wide-field Cell monitoring Array costs $15 and could save lives. Ozcan explains in the video. 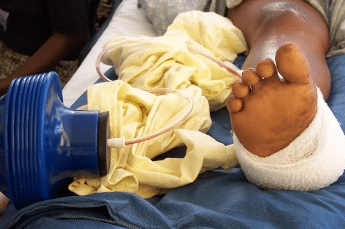 With a hand-held plastic bellows pump, surgical tubing and a new kind of wound dressing, Danielle Zurovcik is developing a cheap replacement for a $25,000 medical machine. The Wound Pump needs no electricity, costs just a few dollars and it’s portable. The negative-pressure machines that it replaces, on the other hand, are bulky power guzzlers that are impractical in many medical centers worldwide.

The hand pump and the hospital machine operate on the same principle. Applying slight, but steady suction to certain kinds of wounds can stimulate the body to heal three times as quickly with less scarring. Danielle, a doctoral candidate at MIT, realized that much less power would be required if the wound dressing were airtight. She worked with doctors in the lab and in the field in Rwanda and Haiti, and she ultimately invented a new material for a dressing that doesn’t leak. 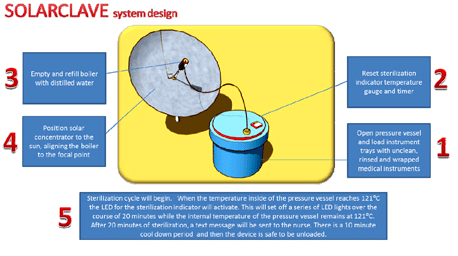 Scissors, tweezers, scalpels and other medical instruments used for routine treatments must be heated and pressurized to kill microbes before reuse. This presents a real challenge to doctors and nurses at rural health posts because sterilization takes more than boiling water. Instead, they must be autoclaved using high-pressure steam at 121 degrees C or higher for 15 to 20 minutes. Since autoclaves are rare in rural settlements, that means sending everything back to a central clinic for sterilization. To save the time spent hauling instruments to and from those hard-to-reach posts, Anna Young and other MIT engineers are developing a “solarclave.” Their design can work in off-grid clinics, it’s cheap, relatively simple to repair, and it can save lives. 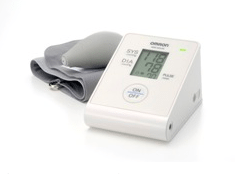 This semi-automatic upper-arm blood pressure monitor has sun-charged batteries (or a cord) to keep tabs on patients and to detect cardiovascular problems such as hypertension. It is a step above traditional manual method, a mercury sphygmomanometer, without the risk of exposure to mercury and it does not require as much training. Its solar-charged batteries can perform up to 300 readings without needing to be recharged. 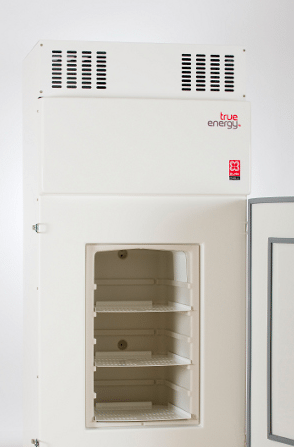 Vaccination programs are in full tilt now, with organizations such as the Gates Foundation, UNICEF and others spending millions every year to immunize people against diptheria, tetanus and pertussis, haemophilus influenza B, hepatitis A and B, polio and other diseases. Nearly all of those vaccines should be refrigerated while they are stored or they can go bad. Refrigerators in rural clinics, however, often have intermittent power supplies. Even in the developed world, vaccine refrigerators sometimes drop below the freezing point and damage the drugs. Studies show that about 13% of vaccines in developed countries, and nearly twice that in developing countries, are exposed to freezing temperatures.

To solve those problems in one stroke, True Energy has developed a solar-powered refrigerator with a freeze-proof mechanism. The UK-based company’s refrigerator can run all day after an average of four hours of charging in the sun. It can also charge at an outlet, with its batteries as back-up if the power cuts out. The device keeps its contents at a constant temperature of 4C, which is cool, but just above freezing.

Here’s how it works. Oddly enough, water is most dense at 4C, and it lightens up from that point as it either warms or cools. In the refrigerator, the vaccines are stored in a space surrounded by water with a water reservoir above it. As the reservoir cools, the 4C water descends and the warmer or colder water below rises. The water reservoir can even ice over and the water below will remain at a constant temperature. If the ice builds up too thick, the cooling unit switches off. Starting at about $2000, the refrigerators have higher price tags than we usually see on technology for developing countries, but the cost may come down. Stewart Jones, who heads True Energy says that the possibility of manufacture in India could eventually cut the price by half.

Prevention may be the best medicine and it begins with knowledge. To teach Indians and the rest of the world’s English speakers about our health, doctors in Mumbai, India founded the Health Education Library for People. HELP is the world’s largest library of free consumer health information with more than 11,000 medical books, magazines, videos and recorded webinars by medical experts. The founders wanted to provide an educational resource that anyone could use, and to teach Indians to avoid health problems in the first place.

Webcast: The Transition to Clean Energy Is a Technological Problem with Political Solutions

Climate change is a problem with technological solutions, but new policy may be required to raise capital to build the infrastructure needed. In a 30-minute webcast debate embedded below, Engineering for Change’s Contributing Editor Dr. Jatin Nathwani argues that cap-and-trade schemes and carbon taxes have not worked and are not the solution. At least not entirely. Instead, the burden of paying for climate change solutions and the transition to clean...