The Roots and Implications of Appropriate Technology

The term “appropriate technology” is so over-used as to be almost meaningless. The notion that technology alone can resolve persistent social problems in developing communities is arrogant—especially when proposed by foreign engineering professionals. In fact, as many practitioners have observed, “there are no solutions — only alternatives,” which are inseparable from their context.

In order to reclaim a meaningful understanding of appropriateness, we need to trace its historical roots, particularly the early innovators whose philosophy provides a framework for responsible intervention in today’s developing communities. The modern notion of appropriate technology was not born in an engineering classroom, but out of the cauldron of a social movement led by Mahatma Gandhi whereby low-tech self-sufficiency was reclaimed to subvert and ultimately prevail over the technologically-superior British Empire.

Appropriate technology, therefore, is not an end unto itself but a means to liberation. Humanitarian engineers must align design with the struggle for liberation to attain long-term impact. Unfortunately, today’s so-called appropriate technologies often fall short, propagating rather than subverting the global forces of Western progress and prosperity.

Appropriate technology, therefore, is not an end unto itself but a means to liberation.

Some of the earliest and most prominent literature on accountable intervention is attributed to E.F. Schumacher, a British economist and protégé of John Maynard Keynes, whose economic theories were influenced by Gandhi. In his 1973 manifesto, Small Is Beautiful: Economics as if People Mattered, Schumacher explains the fundamental role of appropriate technology in sustainable development:

The task, then, is to bring into existence millions of new workplaces in the rural areas and small towns. That modern industry, as it has arisen in the developed countries, cannot possibly fulfill this task should be perfectly obvious. It has arisen in societies which are rich in capital and short of labor and therefore cannot possibly be appropriate for societies short of capital and rich in labor. These requirements can be met only if:

Intermediate technology is a relative term: a technology that stands somewhere between what is known – the traditional technology – and the modern. 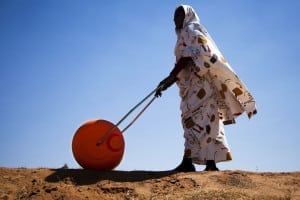 According to Ian Smillie, a Schumacher scholar and historian, intermediate technology “would be small in scale so it can fit into small market situations.” Schumacher coined the phrase “man is small and therefore small is beautiful.” Today, for the first time in history, more of the world’s people live in cities than rural settings. Schumacher observed the trend for urbanization and hoped to create jobs in small-scale rural settings.

For example, consider the hippo roller. It’s hard to imagine a more ergonomic concept for moving large quantities of water over long distances, designed for use by a single person in the household context.

This guide shows how to make a large fuel-efficient wood-burning stove for schools and other institutions.

Schumacher emphasized that “production methods employed must be relatively simple, so that the demands for high skills are minimized, not only in the production process itself, but also in matters of organization, raw material supply, financing, and marketing, and so forth.” This criterion would seem to call into question the complexity of many electronics or other high-tech products being shipped overseas and marketed extensively in developing countries, rather than built there.

For example, consider the rocket stove, made from locally available mud bricks. The technology does not require complicated supply chains or fancy moving parts. It can be taken apart and put back together by trained individuals without formal education. 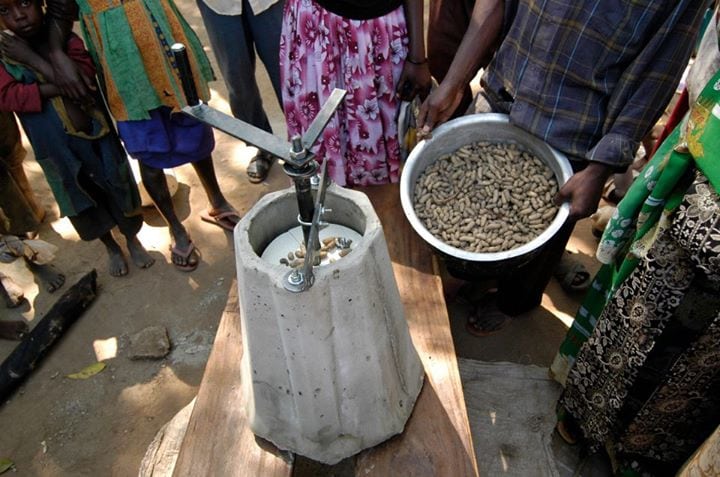 In addition to being small and simple, the actual cost of production must not be insurmountable in developing world context. Schumacher frequently contrasted the European economies which replaced excess labor with capital-intensive automation, as opposed to developing economies, which are lacking in capital and therefore hungry for affordable, labor-intensive occupation.

For example, consider the universal nut sheller, which can be locally manufactured from basic re-usable concrete molds and a metal crank. This technology is not automated, it’s still very labor intensive, but it vastly increases productivity while reducing chronic occupational hazards such as arthritis from shelling nuts by hand.

Schumacher insisted that these products be local both in their material inputs as well as their long-term effects. According to Smillie, “an appropriate technology would be one which is completely under human control, that it would not have unintended side effects, that it would not cause social or environmental disruption.” For this criteria, we would need to take a close look at the supply chains of proposed design intervention—are we sourcing materials that create resource scarcity elsewhere? Does the ultimate price point require inhumane labor conditions or environmental degradation?

In order to be appropriate, technologies must be designed through participation with the user, who is the subject rather than the object of the design process.

Based on an understanding appropriate technology that is emerging from marginalized communities in the 21st century, I would promote the following three factors as a corollary to Schumacher’s original philosophy:

Arguably one of Schumacher’s shortcomings was his assumption that British folks could lead technology development. Time and again, I’m reminded that necessity is the mother of invention. For local innovators and community leaders, sustainability is a matter of survival. Long term utilization requires extreme attention to user desires, intuition, and comfort. In order to be appropriate, technologies must be designed and customized through dialogical participation with the end user, who is the subject rather than the object of the design process.

There are a multitude of “soft technologies” to be employed in the human-centered design process, specifically I would recommend the IDEO HCD Toolkit as a framework for appropriate intervention. In this case, I’m more concerned with process methodology than end result. When it comes to humanitarian work, the ends never justify the means.

Although many of the communities in need of appropriate technology may lack the formal education to develop it singlehandedly, individuals can quickly understand, adapt, and improve upon basic concepts. In this sense, technology becomes a teaching tool to the extent that integrating it into one’s lifestyle fosters an ever greater understanding of its functionality while nurturing an evolutionary capacity to improve upon the technology itself.

For example, I’ve been part of an Engineers Without Borders USA project in an indigenous community in Guatemala where we assisted the community in replacing dysfunctional composting latrines with an anaerobic baffled reactor. Within the first year of operation, the community had made multiple improvements to the design including a standpipe and a thatch roof. They are safely incorporating treated effluent in the school’s agricultural test plot, and have asked us to assist in construction of a similar system on the other side of the river.

Lest we forget the example of Gandhi’s non-violent resistance to appropriate technology is one that empowers individuals to crumble the barriers of stratification within their society and overcome constraints to social and economic progress.

For example, consider the movement for guerilla mobile phone networks in remote areas where cell phones are plentiful. This application of remote computing enables peer-to-peer connectivity in regions previously excluded from the information age and facilitates a leapfrog technology where mobile phones/computing become prevalent before land-lines or hard-wired data connectivity.

Lest we forget the example of Gandhi’s non-violent resistance to colonialism, an appropriate technology empowers individuals to crumble the barriers and overcome constraints to progress.

So, based upon the philosophical roots of appropriate technology and the legacy from Gandhi to Schumacher to the present day, there are many considerations for evaluating and promoting appropriate design interventions in the field. In fact, one resource in particular is a quantitative assessment of appropriateness, developed by researchers at the University of Colorado Boulder.

After reading this, based on your own experiences in humanitarian development: What other criteria would you add? What other examples are relevant in your work?

The Impact.Engineered event recently took place in the heart of Brooklyn, New York at the NYU Tandon School of Engineering. Individuals from the United Nations, ASME Foundation, Engineering for Change, Inveneo, and many other international organizations joined together to uncover significant and futuristic ways the engineering field that will surely “shake things up”. The event was led by Paul Scott, Director of ASME Foundation, Iana Aranda, President of Engineering for...

The social venture Saathi would like to broaden the scope of the projects that can generate carbon and plastic credits. These credits are usually...