The unexpected incubators of appropriate technology 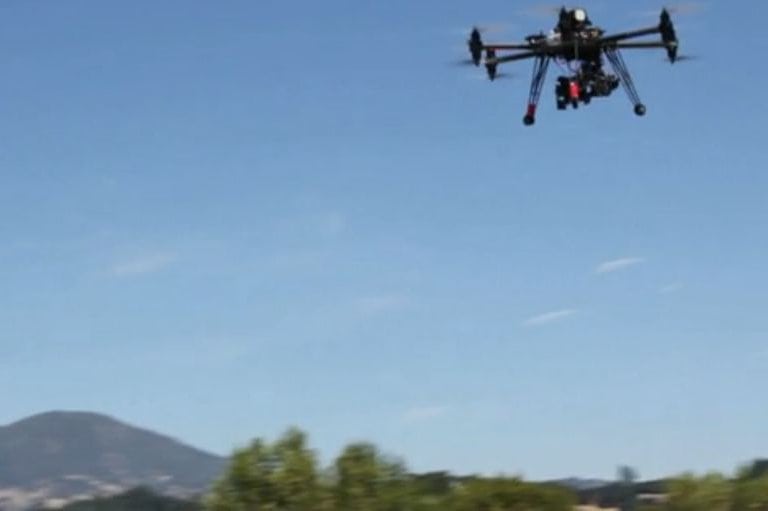 A screen capture of this video shows Reallocate’s pre-Burning Man test run of a drone that could deliver light payloads such as vaccines to hard-to-reach communities.

Maker Faires, Burning Man and even last year’s Occupy Wall Street tent towns have emerged as unusual incubators and proving grounds for new off-grid devices and appropriate technologies for developing countries. Maker Faires and Burning Man are celebrations of the things that people made. And caught up in the art and the fun of LED fashion, a fire-breathing steel dragon and a glowing cloud van, life-saving and lifestyle-improving technologies go through real-world tests.

Burning Man goes up for a week every year in Nevada’s Black Rock Desert, a temporary home for 50,000 people that becomes the state’s fourth largest city. It has the same energy, sanitation and shelter requirements of a permanent city, plus a disproportionate demand for mind-blowing audio, body paint, acrobats, things that catch fire and nightlife. That off-the-grid, transient community is a unique opportunity to test new hardware. 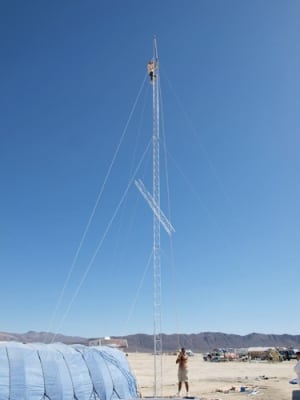 This is the OpenBTS network installation at Burning Man. Photo courtesy of David Burgess

The creators of OpenBTS, a mobile phone network built with hardware and software that are open-source, have tested their evolving set up at Burning Man events since 2008. The system is designed for off-grid use with energy-sipping base transceivers that can be solar powered. It cuts the cost of installing and running a network to about one-tenth that of a traditional setup. At each Burning Man appearance, the OpenBTS team has stepped up the hardware to accommodate bigger and bigger crowds.

This year, a new technical expertise matchmaking organization called Reallocate flew quadrocopter aerial drones around Black Rock City snapping photos and delivering them. Called Project: Blue Sky, the stunt was a test run for drones that could be used in search-and-rescue operations. Similar drones may also be used to deliver light loads such as vaccines in hard-to-reach communities. Incidentally, Reallocate is a group that has caught our interest: It is a non profit that links technical experts to humanitarian and other charitable organizations that need their skills.

Burning Man has its contingent of solar and wind energy aficionados, and online communities can help DIY novices with anything from battery arrays to graywater evaporative coolers. The community offers tips for electric vehicles (maybe try towing an 85W solar panel behind your electric scooter?)

And solar cooking fans took the Burning Man name literally with the Solar Death Ray, a huge parabolic reflector that roasts a hot dog in three minutes. Wear goggles. And here are some tamer solar cooking tips and recipes.

Maker Faires can incubate technologies simply by throwing like-minded people together, often for the first time. Maker Faire Africa, planning its fourth iteration Nov. 5 and 6 in Lagos, Nigeria, has a special knack for inspiring its participants from around the continent. We’ve heard in years past that some participants had never met anyone else in person who shared their love of whatever they do, be it DIY radio broadcast, micro power generation, robotics, and so on.

At World Maker Faire in New York City last weekend, the event’s founder, Dale Dougherty, drew a line to the broader significance of this kind of gathering. Makerspaces, he said, are the are the world’s open research-and-development laboratories, and corporations should take notice.

Appropriate technologies have spilled into Maker Faires and emerged from makerspaces. We mentioned a few at this year’s event, including an infrared mapping tool, cloud robotics and the African Robotics Network, and even an amphibious bicycle.

Makerspaces have popped up in dozens of cities in the United States and schools are piling on to the movement. See lists of locations and schools.

There may be a lot of complicated reasons to explain the prevalence of do-it-yourself and maker culture now, but there is one clear reason why it is sustained: community support. Support pours in from online communities, and these big events that celebrate the things that people welded, programmed, stitched, invented and otherwise made.

Favorable public policies and motivated business ventures converge to place clean cooking technologies into Indian kitchens. When Yash Parmar began designing a clean cooking device, his goal was clear. The young engineer was convinced that most people expect to be able to cook quickly and conveniently, without losing the taste and quality of the food. His mission would be to simplify the cooking process. With that hypothesis in mind, the...