Transitional 'Cardboard' Cathedral in Christchurch, New Zealand, is built primarily from cardboard, a material that could be repurposed from waste and used in low-cost housing. Photo: Jenny Scott (CC BY-NC 2.0)

What if we could reduce the amount of garbage we produce and build low-cost homes to solve housing shortages using one solution? Discarded boxes, toilet paper rolls and other cardboard waste are a potential low-cost construction material.

I’m studying how to repurpose waste cardboard to build homes as part of my Ph.D. dissertation in architecture at Penn State University. The goal is to build new homes or improve existing homes in urban areas, and test how to transfer the technology to informal sectors (such as informal urban settlements). In a case study set in Asuncion, Paraguay, I’m investigating the reuse of cardboard as a replacement for more expensive building materials, such as concrete, metal, timber and masonry.

Too much waste, not enough housing

Dealing with urban solid waste and adequate housing deficit are two of the most critical challenges faced by low- and middle-income countries.

A report by the Inter-American Development Bank published in 2018 estimated that 2 billion tons of waste were generated worldwide in 2016. This number is expected to grow 20 percent by 2030 and 40 percent by 2050, reaching a total of 3.4 billion tons. In Latin America and the Caribbean, the IADB calculated that 70 percent of the waste goes to landfills, and 25 percent goes into open garbage dumps. Only 5percent is recycled in some way. Under these circumstances, we can affirm that we waste a massive amount of valuable resources.

While we’re throwing away resources, housing costs are rising. It may come as a surprise to know that, by one metric, the world’s most expensive cities to live in are in the Global South, including Latin America, where housing costs exceed 200– 300 percent of the average income, according to the Bloomberg Global City Housing Affordability Index. The hardest hit by those high costs may be the 850 million people living in informal settlements worldwide.

Waste cardboard is one of the most significant components of the urban waste stream worldwide – 17 percent of the global waste composition and 13% in Latin America and the Caribbean. It is highly recyclable, lightweight, low-cost (it is one of the least valuable products among recyclables), and relatively stable material for construction if appropriately used, according to previous research in architecture and structural engineering.

The use of brand-new cardboard in architecture has been explored in developed contexts since the 1940s. However, it was not until the 1990s when the work of the Japanese architect Shigeru Ban using paper tubes started to emerge and the interest in this material increased. Cardboard products today have many applications in temporary buildings worldwide. However, alternatives for reusing waste cardboard in developing countries, where the material is regularly underutilized, are limited. 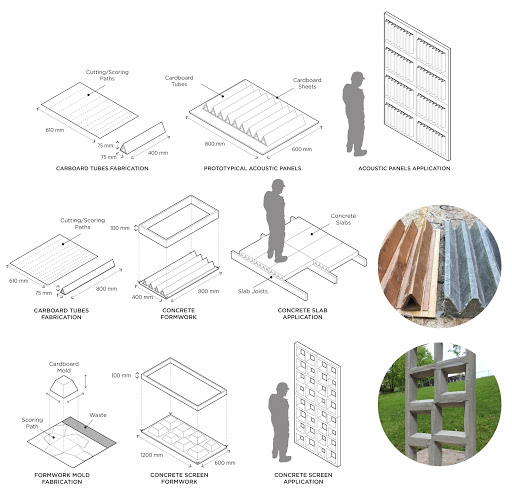 The technology under development that I’m studying could facilitate users to design and generate fabrication instructions to transform waste cardboard sheets into building components. Some components being explored include acoustic panels (to help improve internal thermal conditions), concrete formwork (to decrease the use of wood in concrete fabrication), and wall panels in combination with wood elements (to build or extend an existing house).

The fabrication methods rely on the use of supplies and simple tools available in a scarcity context. Depending on the building component desired, it can include a knife, ruler, cutting surface, glue, fasteners, flat wood elements, additives, and carpentry tools.

Testing the technology with waste collectors

Organizations of waste collectors in Latin America play a fundamental role in implementing a circular economy as “self-employed environmental entrepreneurs.” Although they have made an enormous contribution to selected waste collection services, the lack of knowledge, infrastructure, and technology stop them from adding value to what they collect for personal (e.g., their houses) use or to sell it to third parties (other people who also need to build!).

With this in mind, in summer 2019, I ran a workshop with a group of waste collectors from Asuncion in Paraguay, where we worked for a week testing the system and assembled a prototype building formed by floor, wall, and roof panels made with wood frame and cardboard panels. The experience left us with several lessons. As a workshop facilitator with experience in design and construction, it was interesting to see how people with little knowledge of construction but with strong familiarity with the material could quickly learn how to build with sheets of waste material. The collectors were surprised to find out alternative uses of waste cardboard, a material they sell for around 5 cents per kilogram.

The potential of the material and the need for it are not only in Paraguay or other Latin American countries but also in the world where there is cardboard (which is almost everywhere) in the urban waste stream and a community with the appropriate skills and tools to make it happen.

Julio Diarte is an E4C Research Fellow, a Ph.D. candidate in Architecture at Penn State University and an architect from Paraguay. His research focuses on architectural material processes and computational design exploring methods and tools for reusing waste cardboard as a building material for low-cost housing. He has received the 2019 John Roe Sustainability Award grated by the Sustainability Institute and the Council of Sustainable Leaders at Penn State, and Fulbright-BECAL Scholarship 2016-2020. Mr Diarte holds a Master’s in architecture from the Polytechnic University of Catalonia – Barcelona Tech. He has worked as architect and construction technician in Spain and Romania between 2006 and 2009 and developed his practice in Paraguay since 2010 designing and building housing, educational, commercial, and industrial buildings. Faculty at the School of Architecture, Design, and Arts (FADA) at the National University of Asuncion (UNA) since 2011. He is a co-founder of the Center for Research, Development, and Innovation (CIDi) and FabLab CIDi in 2013 at FADA-UNA. And he published a book about mid-twentieth century Paraguayan Architecture in 2018.