A mother and child in Mwea Village, Kenya.

By the Numbers each Year 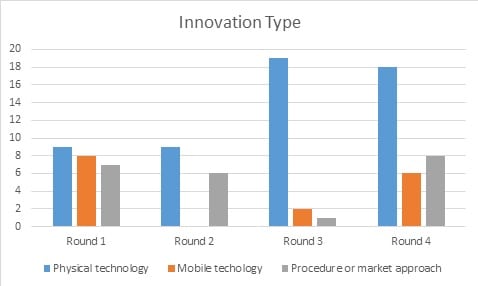 Four years and $50 million reveal clues about the state of technology design. In the past four years, the Saving Lives at Birth partnership has funded 59 innovations that promise to reduce the deaths of mothers and infants during childbirth in developing countries. Now the partnership has announced 30 nominees for its fourth and final round, and a look back at the past four years offers a glimpse at the present and future of technology for maternal health in developing countries.

Few issues could be as heart wrenching. A snapshot of statistics shows that each year nearly 300,000 mothers die in pregnancy or childbirth from a prentable cause, and almost every one of them is in a developing country. Added to that, 2.9 million infants die during or shortly after birth and 2.6 million are stillborn each year.

Saving Lives at Birth has given away money to people trying to solve the problem. Trending this year we see boutique design firms and real devices that you can hold in your hands (as opposed to phone apps or other software), while academia, large non-governmental organizations and ICT4D seem to have lulled. Contributing editor Jordan Schermerhorn dives into the data.

No need to worry, old-school engineers: despite the hype for mobile health apps and software tools, physical technologies have dominated Saving Lives at Birth grantees in every round of competition. These include rugged and low-power electronic devices, drug delivery mechanisms, and diagnostic tools. Why the focus on the real world? Childbirth, of course, is a painfully physical procedure – and this is where most things go wrong. Most of the ICT interventions that received funding focused on preventative measures, such as encouraging mothers to attend antenatal appointments. Non-technical grantees included social campaigns, screening procedures, and innovative payment mechanisms for birth-related expenses. 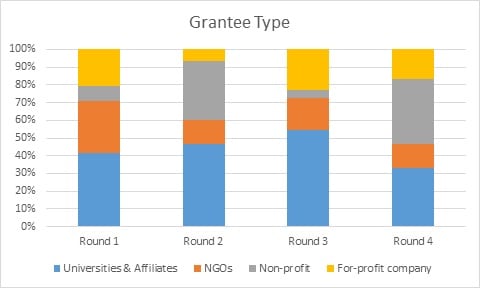 New this year: boutique operators are in, large institutions are out

In a first for Saving Lives at Birth, major NGOs and large research institutions received fewer than half of available grants. Independent organizations – including both nonprofits and for-profit companies – have taken over. While most for-profit grantees in the first two rounds were large medical device companies, such as Laerdal and Becton Dickinson, the past two years have seen a shift towards small medical device startups focused on one or two specific innovations.

This can mean two things: either hospitals and universities are loosening intellectual-property policies and allowing inventors or independent entrepreneurs to license the fruits of their research, or small operators are developing the capacity to design, test, and implement technologies independently. Likely, it’s a combination of both. With plummeting prototyping costs, independent outlets can validate ideas on the cheap and use early results to gain donors and investors. Simultaneously, universities have begun to realize the struggle of large-scale implementation, and major international NGOs remain focused on more traditional non-technical interventions.

Prevention, diagnosis, treatment: at what stage can we save the most lives?

The share grants for preventative innovations is slowly declining, while grants for point-of-care diagnostic devices in particular have increased. This may simply be a function of the type of innovations Saving Lives at Birth focuses on: preventative technologies are almost universally mobile apps or market innovations, while treatments and diagnostics typically require physical input, ingestion, or stimulation.

Four out of five Saving Lives at Birth from all rounds have been from high-income countries. Despite an increasing rhetorical focus on bottom-of-the-pyramid design, this share has not shifted over time. No list of applicants is publicly available, so it’s unclear whether innovations from low- and middle-income countries are being filtered out in the selection process, or whether potential grantees from these regions are simply not applying.

A COVID-19 Ventilator for Everyone

Make Your Own Facemask Tested at 96.5% Filtration Efficiency

Experts or Not, Engineers Can Help Respond to the Pandemic

How Changes Brought on by Coronavirus Could Help Tackle Climate Change

Coronavirus: What Might More Handwashing Mean in Countries with Water Shortages?

By Kay Chau, Director of Product and Customer Success at TaroWorks Making do with less is a fact of life for social enterprises and nonprofits. For cost-conscious organizations, finding pro bono consulting help and technology grant funding may be the only way to achieve certain ICT for development goals (ICT4D). Based on our experience at TaroWorks and additional research we’ve done, here are some suggestions for stretching your technology budget with the...

This Is the Bare Minimum Checklist for a Viable Product

Engineers and designers in the early phase of product development often have questions about what makes a product viable. The answers can improve a product’s...

As COVID-19 wreaks havoc on global supply chains, a trend of moving manufacturing closer to customers could go so far as to put miniature...