3D printed prostheses may not be practical in developing countries, yet

3D printed prostheses, especially prosthetic hands, have seen a surge in developing countries, but the technology may not be ready yet to make a big impact. The printing process can take days, the hands suffer performance issues, and the manufacturing method does not address one of the main obstacles to the fitting of any kind of prosthesis in developing countries: the scarcity of trained prosthetists.

3D printers are gaining popularity in low- and middle-income countries. They churn out products such as agricultural tools, automotive parts and anatomical models for medical students. The method is great not only for lowering costs, but also for modeling a concept, adding detail, simplifying repair and maintenance, and allowing for personalization. It has also become popular in the manufacture of prostheses, in particular prosthetic hands.

Of the 3 million upper-limb amputees, 2.4 million live in developing countries. Groups focused on 3D printed prostheses—such as Nonspec, OpenBionics, and e-NABLE—often intend to provide an alternative for low- and middle-income countries to decrease the number of amputees being negatively affected by their limited functionality.

The Humanitarian Engineering and Social Entrepreneurship (HESE) Program at Penn State University worked with the e-NABLE network to assess the appropriateness of these 3D printed devices for large-scale dissemination in low- and middle-income countries. Ultimately, is this method of production appropriate for these assistive devices? What are the device’s abilities and does it address an actual need? How would such a device reach the people who need it? We performed extensive research in our lab and on the ground in Zambia to evaluate the viability of 3D printed prosthetic hands and discovered the advantages and challenges to this new technology.

3D-printed hands: The good and the bad

Manufacturability: To determine if 3D printing, in its current state, is a viable option for prosthetic devices, HESE manufactured and tested the Raptor Reloaded. The Raptor Reloaded, produced by e-NABLE, is designed for users with wrist disarticulations—as were 10 of the 18 prosthetic hands discovered in our research that were designed for low- and middle-income countries. The CAD model for the Raptor Reloaded can be modified and scaled prior to printing. While this allows for customization, the duration of printing was an issue. Printing takes 32-54 hours, which may be an unrealistic wait time for an amputee traveling long distances to receive the prosthesis. In balancing time, cost, and customizability, we determined that a hybrid approach of 3D printing and injection molding would be a better option to decrease manufacturing time while keeping costs low and enabling some customization.

Capabilities: We then followed a protocol similar to that of the Southampton Hand Assessment Procedure (SHAP) to test the capabilities of the hand. SHAP is standardized testing of the effectiveness of upper-limb prostheses through manipulation of objects that are common in everyday activities. Using two different hand sizes, 20 participants performed a set of activities. The results indicated that this hand has limited capabilities with its current design. For example, users were unable to pick up or maneuver small objects, such as coins and keys, and had difficulty performing a drinking motion. Furthermore, to carry an object required that the user maintain flexion of the wrist. However, users were able to perform simple tasks that did not require fine manipulations of the fingers, such as picking up an empty cup or small ball. Designed for areas where the main source of income is typically manual labor, these limitations could reduce the appropriateness of the product. 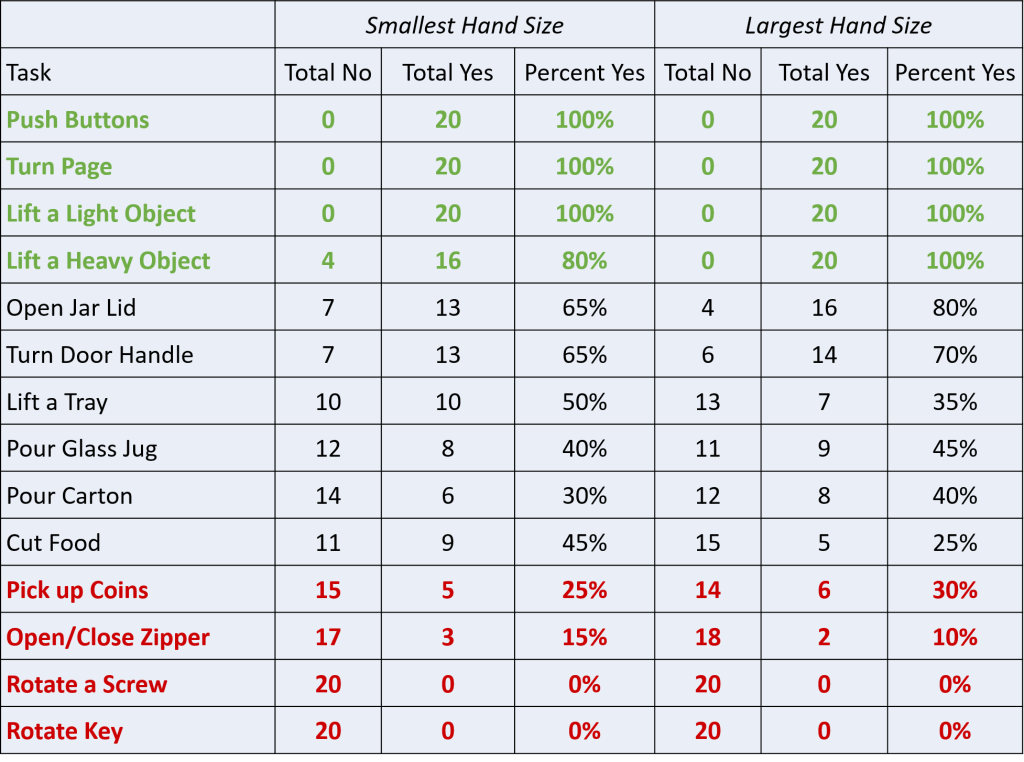 Distribution Pathways: When looking into the pathways for prosthesis manufacturing and distribution, we discovered that there are four primary pathway types—faith-based organization-mediated, nonprofit-mediated, for-profit-mediated, and those centered on a hospital or orthopedic center—for getting these devices from the manufacturer to the amputee.

A significant issue facing the distribution chain is the lack of availability of prosthetists and rehabilitative services. According to the World Health Organization, less than 5% of the population in low- and middle-income countries has access to these services. With a limited number of training facilities in Africa, a majority of countries must send their students to another country for training. Additionally, the rural workshops and hospitals serve as bottlenecks in the pathway. Even if materials and devices are available, it is still difficult to distribute the prostheses to those in need, particularly given the length of travel often needed to visit a hospital or workshop. Access to rural amputees becomes a particular concern since successful, long-term use of a prosthesis requires maintenance and rehabilitation–at additional time and cost to the amputee. Thus, maybe the focus should not be necessarily on providing alternative devices, but building an alternative system. 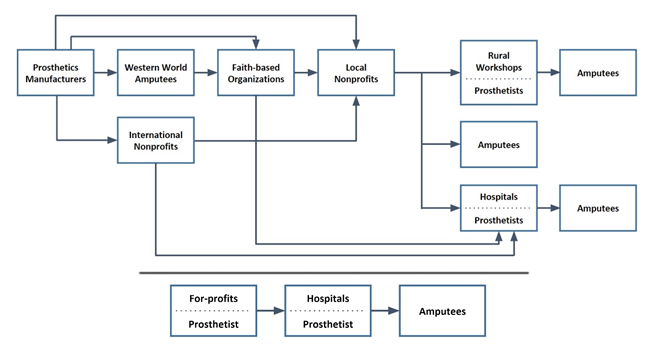 Lessons Learned and Future Directions: Although there are several limitations of current 3D printed hands, this manufacturing process has potential. One route would be to work with a stronger material than the plastic that is used in current designs. Metal 3D printing, although more expensive, could eventually become a viable option to strengthen the design. Moreover, a design that allows for increased and finer control over movement to allow for a broader range of capabilities would be helpful. As previously stated, most of these 3D printed prostheses are designed for wrist disarticulations. Of the upper limb amputees in low- and middle-income countries, only 4% have wrist amputations, and it is likely then that the number of wrist disarticulations will be even lower. Furthermore, those with wrist disarticulations would be the most likely to adapt post-amputation without the need for a prosthesis. Shifting the focus of design efforts, then, to a prosthetic leg would be more applicable, as a person is more dependent on the lower body for mobilization and the ability to work, especially in low- and middle-income countries.

Sliced bread: Why “development” won’t be a result of technological innovations

It seems that at nearly every store and bakery in Malawi, the southeast African country, there is a bread slicer that is missing one of its blades. Maybe it snapped off. Maybe it got lost. Maybe it got jury-rigged into a knife for the butcher to use at the same store. But you can bet that one of those blades is gone, which means every loaf cut by that bread slicer has...