A modular irrigation pump that grows with the farm 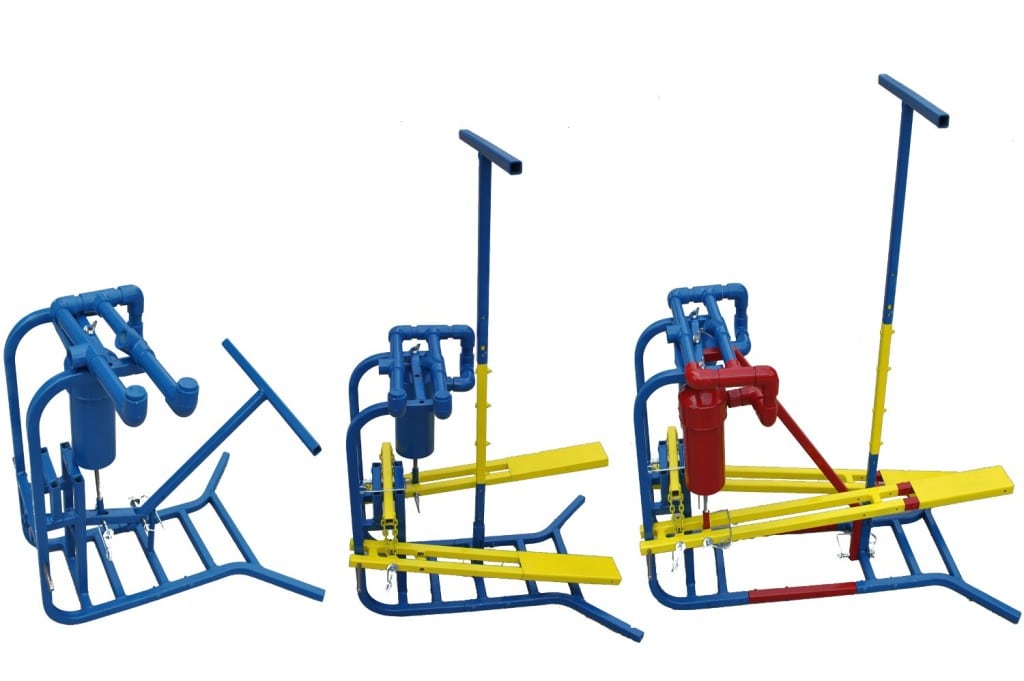 An experimental water pump starts small and builds up with modular upgrades. The base product is a single-cylinder hand pump. An add-on kit transforms it into a more-efficient foot-powered treadle pump. Then a third kit adds a second cylinder and lengthens the treadles for more pumping power and efficiency. Small-plot farmers can pay for more irrigating power as their farms grow and they earn money from their investment.

“In the case of people in poverty, they’re extremely risk averse,” Patrick Lewis, a mechanical engineering student at Brigham Young University in Provo, Utah, who is developing the pump, told E4C. “Recognizing that, we need to create something that’s initially inexpensive. As they use it, their view of what’s affordable changes and they can purchase something to make the original product perform better.”

If you’re moving water from its source to your crops by the sweat of your own brow, you can’t go wrong with a treadle pump. Like a stair-stepping machine, the treadles put the body’s biggest muscle groups—our legs—to work. On the millions of the world’s small farms that lack running water and electricity, human-powered pumps may be one of the least expensive ways to water the fields. Even cheap pumps, however, can cost too much for farmers who live on as little as one or two dollars per day. Lewis puts the cost of a basic treadle pump at the equivalent of a three-month salary for some of the world’s poorest farmers.

Irrigation can double crop production, the UN Food and Agriculture Organization says. But in a classic Catch 22, the way to afford pumps and equipment for irrigation is to produce and sell more crops. The modular pump is an attempt to beat the problem with a low up-front investment for low-income farmers.

The device is one of the latest in a line of promising appropriate tech prototypes from Chris Mattson’s lab at Brigham Young University in Provo, Utah. Last year, Mattson and his students successfully field tested a human-powered, rock-penetrating water well drill.

The students did not set out to build a pump. Instead, they built a computer-assisted method for designing lots of different kinds of products, and they continue to refine that method even now. The method creates products that transform and improve with the addition of new parts. With digital models, the program predicts the performance of a device as new modules are added on. The pump was a real-world test of how the program performs.

Other designs that the researchers ran through the program are an unmanned aerial vehicle that reconfigures for different kinds of tasks, flood-resistant modular housing that can grow in segments as a family grows, and hand tools that interlock to perform new functions.

The first prototypes of the pump don’t perform as well as Lewis and the BYU team would like. They have experimented first with a design built mostly from wood, which broke after a few uses, then with steel. The steel can rust, but it’s the most effective design so far. To improve the flow rate and efficiency, future prototypes might have a cylinder piston with a smaller diameter and shorter treadles. We will post updates if the team continues to develop the design.

IEEE’s Global Humanitarian Engineering Awards set a tone for the field of technology for global development this year honoring well-tested tools with the potential for broad appeal. The accolades go to the counterfeit drug stopper Sproxil and iDE’s crop irrigation systems, the awards committee announced recently. Protecting the world from fake medicine Ashifi Gogo, founder of Sproxil Inc., is IEEE’s Humanitarian Engineer of the Year. Sproxil curbs the spread of...