Wall sockets don’t need a eulogy, yet, but Harold Tan is already talking about them in the past tense. To him, the sockets have set out on the same path as landlines, right behind relics like film, vinyl, typewriters and videotapes. They all seem destined for a museum case and a special on the History Channel. The reason, Tan says, is that we’re at the start of an energy independence revolution.

If there is an energy revolution then Tan is working on the front lines. He has just finished the development of foldable, portable solar panels. Tan and Gigawatt, Inc. have created 14w and 20w monocrystalline panels with battery packs that deliver quick charges and work even in cloudy weather. To pay for their first run, the design team is crowdfunding the development of a first run of the panels, called SunJacks, and they plan to retail them later this year.

The panels should cost $150 for the 14w and $250 for the 20w. The SunJack team also plans to give panels away to communities that live off the grid or that only have intermittent power supplies in Papua New Guinea.

Imagining what the start of an energy revolution might look like in the United States or another developed country amounts to a talking point now. Does it look like a string of startups offering portable power generators on Kickstarter? Will we really carry our power supplies on our backs some day? 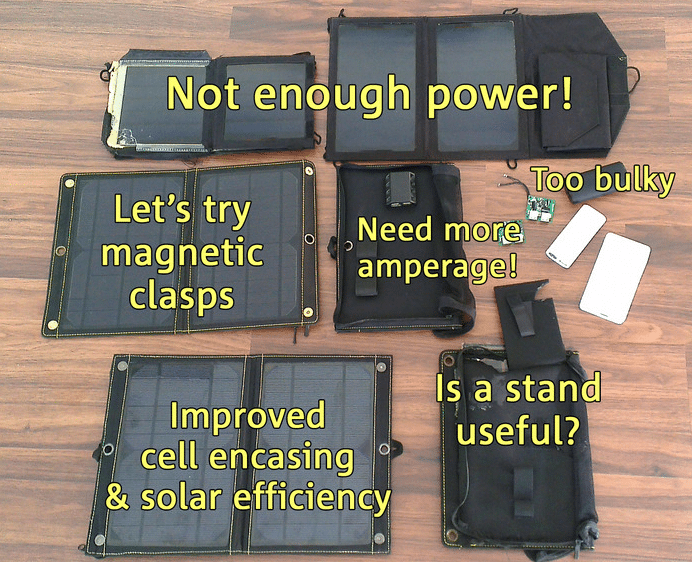 SunJack’s inventors went through dozens of prototypes like these before settling on their current version.

But the possibility takes on more urgency in an off-grid village or any energy-starved community in a developing country. SunJacks and other micro power generators could have a powerful impact among the families that get to use them. They could save hours of walking for a mobile phone charge, they could allow kids to study at night by electric light, and they could supplement small businesses by entrepreneurs who sell charges.

Whether or not they are spearheading an energy revolution, SunJacks are part of a rising trend in quality crossover products that meet basic needs in the West and in developing communities. These products include Fenix Int”s ReadySet battery, One Earth Designs’ solar grills, Biolite’s phone-charging clean cookstoves and this new microscope lens for mobile phones by MicroPhone.

These startups often leverage crowdfunding, like SunJack, to raise money for production, and they carve their own distribution models for developing communities. One Earth Designs sells its grills in the developed world at a premium to subsidize a lower price for nomads in China and other people in developing regions. SunJack pledges to give away some of its panels to households in Papua New Guinea and it allows consumers to buy panels as gifts for people in developing communities.

Giving things away versus selling them is a controversy in global development. In fact, it’s one of our Big Design Quesitons. We asked Tan for his view, and he says that giveaways help if the product is right.

“With solar power. we are actually helping cultivate the economy by providing renewable energy that can be used to power life and business (here’s an example of a similar cause: Solar Sister),” he says.

Solar cells and lights can improve businesses, communication and medical service, and they’re durable, Tan says. In 25 years, his panels might still operate at 80 percent capacity.

SunJack has reached its goal on Kickstarter, but there’s still time to contribute. See the campaign page for details.

Megan Richardson is mechanical engineer early in her career who maneuvered into the global development technology field from the beginning. Before she began her Research Fellowship at Engineering for Change in 2018,  Megan had deep experience in engineering for global development earned through the US Peace Corps. She had graduated from the Peace Corps Masters International program at Oregon State University, where she studied mechanical engineering and applied her education to...