The Airbus 320's new partition is light weight but strong enough to support a seat for the crew.

Advanced Simulation May Change Product Manufacturing for the Better

There is a class of things that merge form and performance into labyrinthine lines that no person could have created. They are designed by artificial intelligence nudged toward goals that a human at the helm provides. The human-machine collaboration spins out advanced simulations that can take fantastical shapes in the attempt to invent parts and entire products that perform in ways that have never been seen before.

Generative design programs may be at the leading edge of advanced simulation software. It is new to the field of manufacturing, and Autodesk heads development of the software. 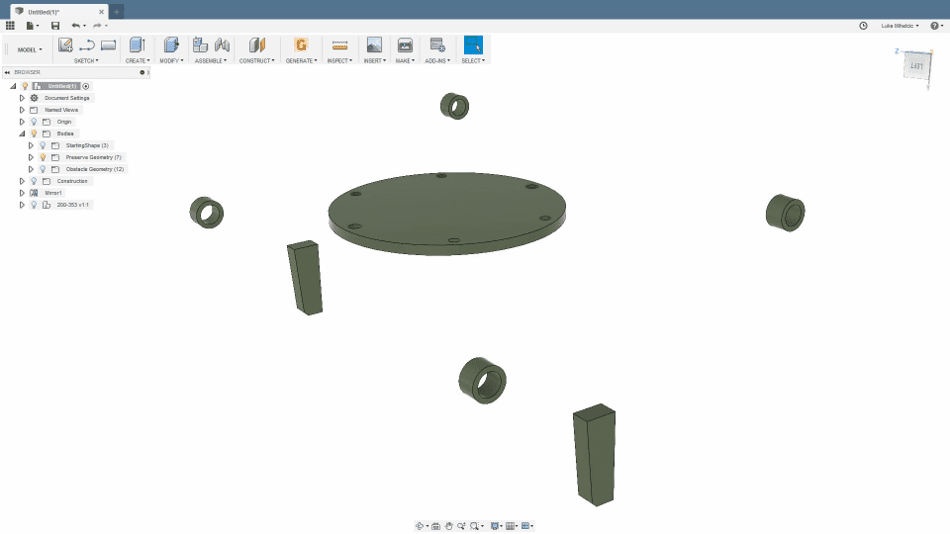 A screenshot of Autodesk’s generative design software at work.

“Rather than directing the computer to draw a design, the designers state their criteria and let the computer generate an optimized part. The computer becomes a partner in the design process,” Ms. Bezpalko says.

As a class, these things can look weird. Their oddly beautiful shapes can appear more organic than artificial. Car parts or jet chassis, to name two examples, evoke a science fiction aesthetic. But that superficial weirdness signifies a meaningful difference. When the human designer’s goals for the software include reductions in the energy needed to manufacture a product, or the material needed to make up a part or a system of parts, what emerges are sometimes interesting shapes that reduce costs and take a lighter toll on the environment.

This is how a software company can someday have an environmental impact that ripples out to its millions of software users and touches the lives of billions of people who use streamlined, efficiently manufactured products. By saving energy, raw materials and money, the process has the potential to transform the way things are manufactured. It’s happening now in select companies large and small, from global conglomerates to social enterprises. General Motors, Airbus and even the architects of Autodesk’s Technology Centre in Toronto have adopted generative designs. And a social enterprise called Biolite employs other advanced simulation tools to create its phone-charging cookstoves for emerging markets and fans of the outdoors.

General Motors has been shedding weight since 2016. Through new materials and advances in technology, the US vehicle manufacturer has built 14 models each an average 160 kilograms (350 pounds) lighter than their predecessors. To drop even more weight, GM’s designers were early adopters of Autodesk’s generative design programs. The two companies worked together to create a proof-of-concept auto part, a seat bracket for fastening seatbelts. The software worked within limits that human engineers set, including connection points, strength and mass. It delivered more than 150 options, and the engineers chose the one pictured. It is 40 percent lighter and 20 percent stronger than the original part. Its unexpected geometry hints at a strange new world of vehicles designed to minimize weight and material.

“This disruptive technology provides tremendous advancements in how we can design and develop components for our future vehicles to make them lighter and more efficient, Ken Kelzer, GM’s Vice President of Global Vehicle Components and Subsystems, said in a statement. “When we pair the design technology with manufacturing advancements such as 3D printing, our approach to vehicle development is completely transformed and is fundamentally different to co-create with the computer in ways we simply couldn’t have imagined before.”

Lighter-weight vehicles can burn fuel more efficiently and save money for drivers, but the new designs possible with this software can also save money in the manufacturing process.

“These tools open vehicle design up to different materials, different manufacturing processes, designs that consolidate multiple parts into a single part, and so on,” Ms. Bezpalko says. “That means not only less material, but less assembly, fewer spare parts and less inventory, which has an impact on the bottom line.”

Airbus 3D printed this "bionic" partition for its A320 jets.
The partition is light weight but strong enough to support a seat for the crew.
Design concepts imagine entire jets constructed in a "bionic" style as a product of generative design.

Generative design revealed thousands of options for aircraft parts when engineers at Airbus and Autodesk partnered to create a lightweight partition in the A320. The new partition, which separates the passenger cabin from the galley, is 45 percent lighter than current models, but still strong enough to support seats from the cabin crews during takeoff and landing.

The finished ‘bionic partition’ looks something like membrane in living tissue. It intentionally mimics the cellular structure and bone growth in living organisms, Airbus said in a statement.

Making the leap from screen to reality, the partition was 3D printed from a proprietary alloy of aluminum, magnesium and scandium. Airbus calls it the largest 3D-printed airplane cabin component in the world. Generative design produces shapes that are impossible to manufacture with traditional methods, making 3D printing necessary, Airbus said.

If incorporated into the backlog of Airbus A320, the company estimates that weight reductions from this part alone could save 465,000 metric tons of carbon dioxide emissions per year. 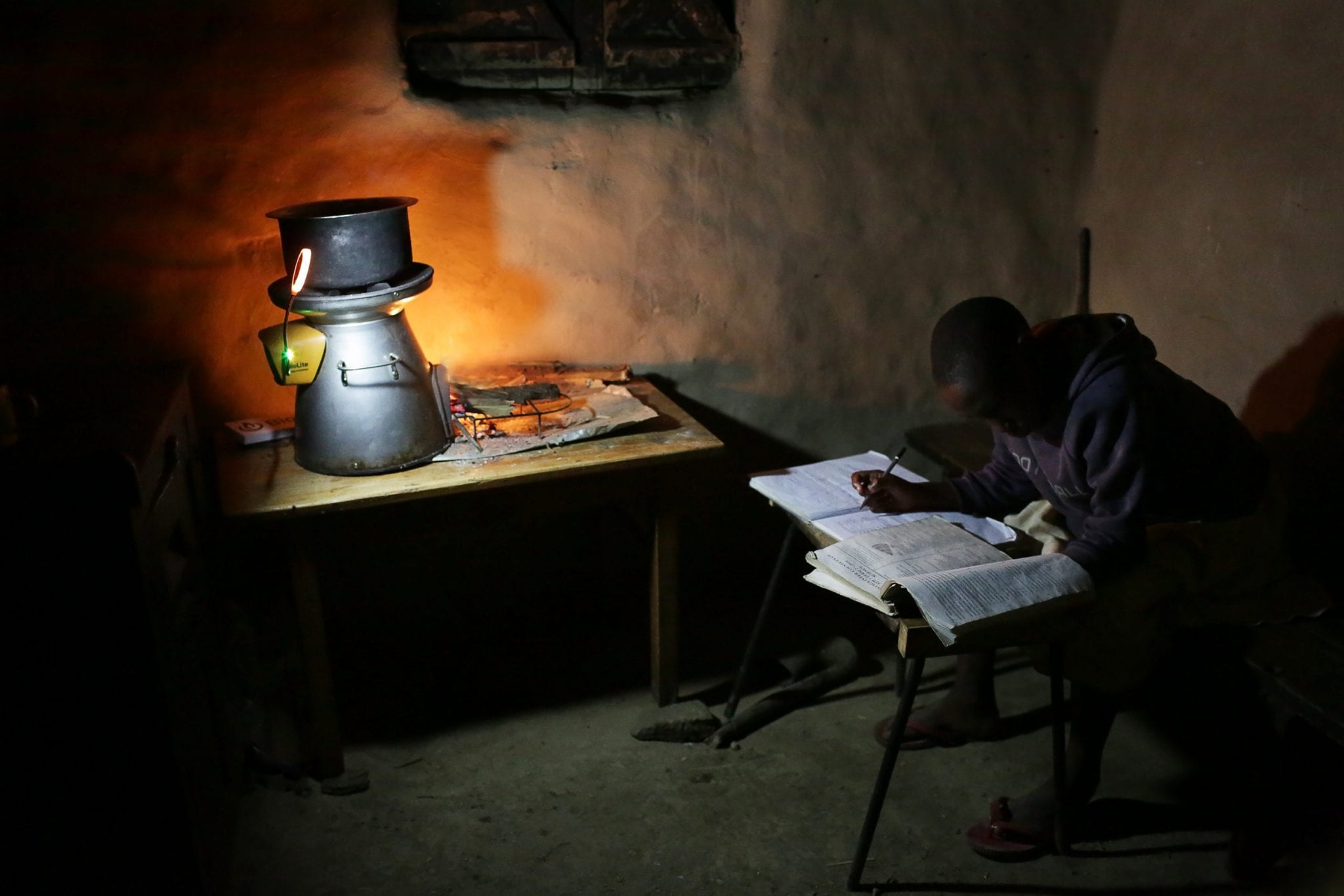 Two backpackers living in Brooklyn, New York (USA), had the good idea to couple thermoelectric generators with portable, wood-burning stoves. The burning wood powers a fan that blows into the stove’s combustion chamber, mixing gas and smoke into the flame. That means the stove burns with extremely low emissions. And it produces enough leftover electricity to charge a mobile phone through a USB port. Then the stove makers realized that their low-emissions stoves could reduce indoor air pollution in kitchens in underserved communities around the world. Jonathan Cedar and Alec Drummond founded Biolite, Inc. to sell lightweight models of their stoves to fellow outdoors enthusiasts, and larger versions to cooks in developing countries.

In beginning, Cedar and Drummond built prototypes and tested performance in the real world. After partnering with Autodesk, the two began building virtual stoves using Autodesk Simulation Computer Fluid Dynamics software. Like generative design, CFD creates simulations for testing and yields results that can be quicker and less costly than building real objects.

“By simulating many stages of product design and performance with Autodesk Simulation CFD and Autodesk 3ds Max design software, we were able to evaluate the relative impact of different design directions, reduce the number of physical prototypes we had to construct, and avoid overbuilding. That helped us save considerable time and money,” Jonathan Cedar, Founder and CEO of BioLite, Inc., said in a statement.

Biolite digitally simulated heat transfer in the different models of their stoves. Autodesk’s tools also aided the aesthetic design of the stoves. Design visualization software rendered digital prototypes so detailed they could pass for photos of real stoves. Minus the expense of building real stoves.

A Future of Greener Manufacturing

Generative design and other advanced automation and simulation software is in its infancy now, but it has the potential to change products in any industry. It could make things greener, from the assembly line to product performance.

“Right now, the goal I might have for a design is how to make the parts as light as possible. But imagine if there were many other goals in there. If you want your products to have the lowest carbon emissions, or if you want them to be modular to reduce waste, or if they should be built for re-manufacturing and given a second life as a part of a circular economy. Generative design could change how we work in unpredictable ways. Products and even architecture could be healthier, promote wellness and reduce toxicity,” Ms. Bezpalko says. “We’re looking toward a future of making products that are better for people and the planet.”

Arriving at that kind of future may be a group effort. Autodesk is developing an application program interface (API) platform for its software, meaning it supplies the tools that others need to build applications directly onto the software maker’s foundation. Companies could build a plugin to assess a product’s lifecycle, for example, or the environmental sustainability of a thing. With an open platform, masses of people can build tools to streamline processes and products worldwide.

We are glad to see another novelty in efficient stoves: dung burners. Students at the Univeristy of Adelaide, Australia, turned their problem-solving minds to the dung-burning fires kitchens of Nepal’s Terai region and developed a clean-burning stovespecialized for that unusual fuel. In the absence of woody forests, dung from livestock is only option in the region. But open dung-burning cook fires are a health hazard just like a wood fire....