The first time I traveled to the Amazon, in 2010, I had no idea what to expect. A doctoral student from the far-off Brazilian city of Belo Horizonte, I imagined that my field work – studying fish habitats in the largest tropical forest on Earth – would be all boat rides on immense rivers and long jungle hikes.

In fact, all my research team needed was a car. That’s because the Brazilian Amazon isn’t just a rainforest: This 1.6 million square mile area is also home to villages, farming, logging and even mining. That means there are roads, most of them dirt.

Scientists have long known that roads contribute to deforestation, both in the Amazon and in other rainforests. But my research reveals that these transportation networks also harm Amazonian waterways, affecting the fish that thrive in this delicate habitat and endangering local communities.

Water, water everywhere but not a bridge in sight

Our original 2010 study examined water conditions and fish diversity in 99 small streams – called “igarapés” – in the Amazonian state of Pará. To reach them, we drove long distances past pastures, large plantations and small villages, through dense virgin forests and young regenerating jungle. 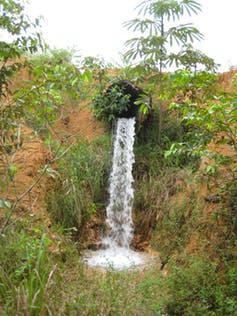 We also crossed a lot of rivers and streams – the waterways that nurture this rich tropical ecosystem. Rarely did we use a bridge, though.

Instead, we discovered, most Amazonian igarapé crossings are an informal affair. Streams are narrowed with packed dirt, and water is channeled underneath via a metal pipe.

Most of the makeshift culverts we saw were either too narrow for the water flow or were installed too high – “perched” such that they created a sort of mini waterfall on the downstream side of the crossing, visibly disrupting the water flow.

A fish would really struggle to get through a perched culvert, we thought. Clearly, these informal stream crossings must be affecting local fish populations in other ways, too. I’ve spent the past eight years documenting how.

The Amazon’s rivers and streams contain a brilliantly diverse array of fish – so many thousands of species that scientists are still finding new fish families. We counted 44 species of fish in just one small Amazonian stream. That’s more than live in all of Denmark.

After many hours measuring various attributes of small streams – including water depth, channel width, water flow, temperature and types of substrate – and sampling the fish that lived there, the data from our 2010 study confirmed that dirt roads are ravaging Amazonian streams. 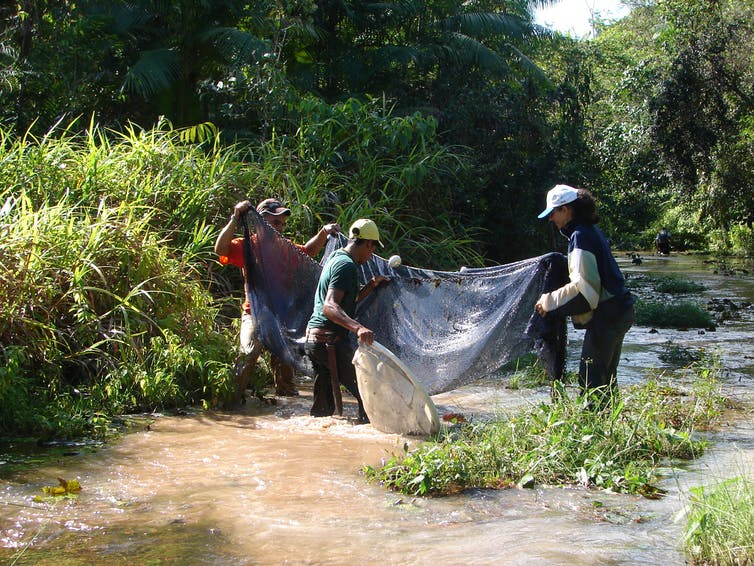 The research team at work in an Amazonian igarapé. Photo: Rede Amazônia Sustentável

We found that makeshift road crossings cause both shore erosion and silt buildup in streams. This worsens water quality, hurting the fish that thrive in this delicately balanced habitat.

The ill-designed road crossings also act as barriers to movement, preventing fish from finding places to feed, breed and take shelter. This can lead to what’s called “faunal homogenization” because the most vulnerable aquatic species die out, leaving a less diverse fish community.

Disrupted water flows particularly affect carnivorous species, which tend to hunt across long distances. The dogtooth fish, or Acesthrorhynchus falcatus, for example, typically hunts in many different streams, swimming from one to the other in search of prey.

We don’t know yet what happens to carnivorous Amazonian fish whose range is shrunk by road crossings. But malnutrition, inbreeding and even species endangerment seem like likely outcomes.

Taken together, these makeshift “bridges” – some belonging to roads built illegally – have profoundly fragmented the Amazon’s freshwater ecosystem.

In the Curuá-Una River basin, for example, prior studies document one impoundment for every 4.7 miles of stream. In the upper Xingu River, a southeast tributary of the Amazon River and one of the largest clearwater rivers in the Amazon basin, there are some 10,000 road crossings. There, water temperatures have risen up to 3 degrees Celsius, in part because shoreline trees are cut down to make way for crossings, allowing sunlight to penetrate.

Cattle ranchers across the Amazon tend to construct similar dirt crossings. Since that’s private property, though, it’s hard to know how many or measure the impacts.

What an unnecessary problem for the fragile, embattled Amazon to have.

Brazilian farmers who live in the Amazon do need roads to get around and to transport their crops. But unlike logging, mining and agriculture – activities that profoundly threaten this fragile rainforest – road-stream intersections don’t have to harm Amazonian waterways. It’s a question of design.

The Amazon’s transportation infrastructure is built so poorly because Brazil lacks federal guidelines for constructing rural roads in a technically correct and environmentally sensitive way.

Existing environmental regulations simply don’t account for the negative impact of roads on waterways. We even found culverts choking off streams inside the protected Tapajós National Forest.

This doesn’t just hurt fish. Many Amazonian stream crossings are built during the dry season, between April and September. When the six-month-long rainy season comes, the igarapés fill and swell, leading undersized culverts to rupture. Routine flash floods endanger the people who live downstream and lead to more frequent road repairs.

Other countries – including Sweden, the United States and Canada – have all developed good technical guidelines for building and monitoring ecologically friendly road-stream crossings. Elevated bridges and fish-friendly culverts, for example, can minimize impacts on aquatic habitats.

Brazil would, of course, need to adapt these technical guidelines to work in the Amazon, a tropical forest unlike anything in Europe or North America. But it’s an environment well worth the investment.

Ethiopia’s new 8028 Hotline has handled a deluge of calls from farmers looking for agricultural information. The Ethiopia Agricultural Transformation Agency’s hotline launched in 2014 as a text (SMS) and interactive voice response system that disseminates agronomic advice to smallholder farmers. To date, the system has received 17 million calls from 2.2 million registered users, amounting to more than 2 percent of the country’s entire population. The hotline addresses obstacles that are common to the...