A new prototype identifies invasive insects on farms and issues alerts to phones and computers. Image courtesy of AgroPestAlert 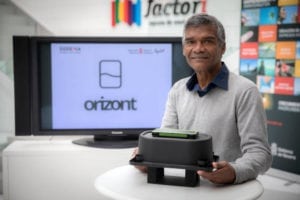 A new bug trap in development applies artificial intelligence to the ages-old problem of pest control on farms. AgroPestAlert, a Spanish startup with roots in Chile and Venezuela, is a network of “smart” traps that capture insects and analyze their wing beats to identify their species and even their sex. Placed throughout the fields, the traps communicate with the system to predict an imminent invasion. When complete, the system will send alerts to phones, tablets and computers and use an easy-to-understand visual tool to cue farmers instantly.

“Our traps use an AI algorithm which has already been lab tested with a precision of about 90%,” Victor de Ponte, CTO of AgroPestAlert, told E4C. “The data is sent in real time to our application in the cloud for its processing, firing alarms when the population surpasses the desired threshold.”

The system could cut more than two weeks off the time it normally takes for farmers to become aware of an invasion. Today, farmers often use glue traps. Workers place glued boards throughout the fields, wait two weeks, then collect the boards of stuck insects to take to a lab for analysis.

“This gives enough time for flying insects to reproduce, and by the time the data is processed, the population may have grown a couple of generations, depending on the insect species,” Mr. de Ponte says.

An automated system like this could reduce manual labor on farms by cutting the need for field visits, and with early alerts, farmers may be able to reduce their use of pesticides.

Better insect control could be a boon for crop producers. Worldwide, crop losses to animal pests and pathogens amount to 16—18 percent, according to research published in February, 2006, in the Journal of Agricultural Science.

At the same time, an automated system like this could reduce manual labor on farms by cutting the need for field visits. And with early alerts, farmers may be able to react quickly and reduce their use of pesticides, Mr. de Ponte and his colleagues say.

How a machine identifies an insect

The traps employ a bi-dimensional laser beam and a suite of off-the-shelf, low-cost environmental sensors. When an insect crosses the laser, the interruption trips a photosensor battery that records the spectrum of wingbeats. The traps communicate through GPRS mobile radio technology (2G and 3G mobile service), but that could change.

“Our goal is to make them communicate in a mesh-like topology, with gateways scattered over a certain number of traps, to reduce communication costs,” Mr. de Ponte says.

The AgroPestAlert team is training the algorithm and experimenting with other metrics from its environmental sensor suite that can lead to better insect identification. Some of those include temperature, atmospheric pressure, wind speed and direction, soil pH, and relative humidity.

To reduce costs, the system is built with open source technologies, with the exception of its proprietary algorithm, the preprocessing of the audio signal and the communication protocol between the traps

“This technology makes ours one of the cheapest automated solutions in the market for pest population monitoring,” Mr. de Ponte says. 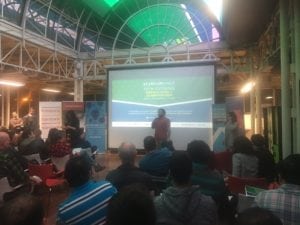 As such, the startup has attracted attention and assistance internationally from the private and public sectors. Some of those include the Spanish Navarro Institute of Agricultural Technology and Infrastructure (INTIA), the international food corporations Florette and Gelagri Iberica, and the accelerators Imagine Business Lab in Chile and Orizont in Spain. The team partnered with and received funding from SODENA, a government-operated business development agency in Navarra, Spain. Another accelerator, Orizont, provided funding and the team has an agreement with the Fruit Development Foundation in Chile, which provides lab-grown insects for testing and access to its entomologists.

Field tests of the wingbeat algorithm are underway and the visual tool is in development. AgroPestAlert hopes to launch publicly in early 2018.

Can open source hardware change how we farm?

Marcin Jakubowski has a vision of a DIY utopia in which everyone is a highly trained and self-sufficient maker. In his dream, the average person can build their own home, assemble a tractor to tend their farm and live in sustainable communities without sacrificing the high technologies to which we’re accustomed. His world view is steeped in the DIY spirit, so to make it come about, Jakubowski is, of course,...