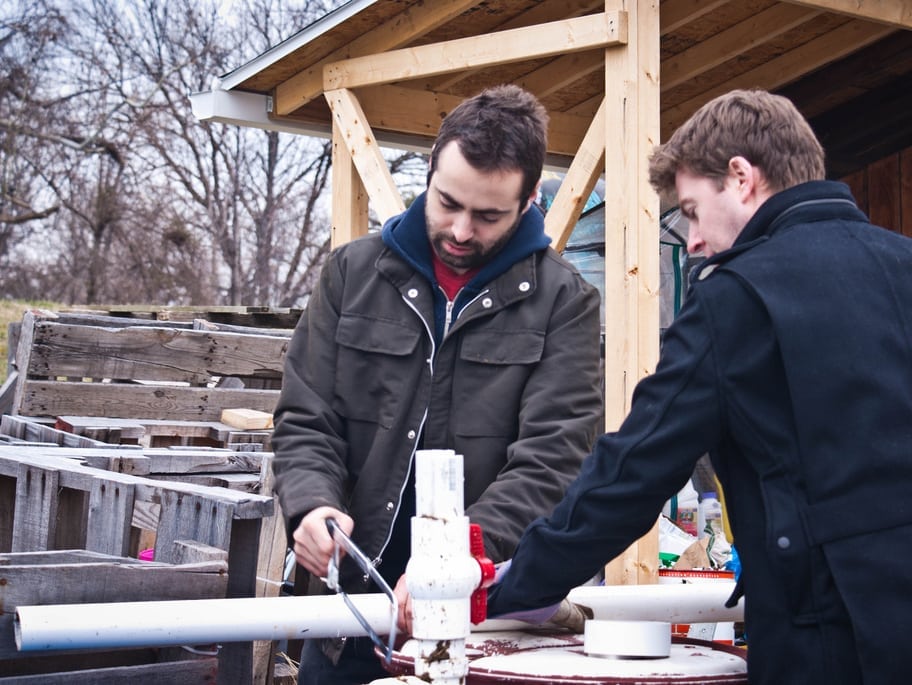 The BioD team builds a prototype of their biodigester. Photo by Hatch International

A cow’s digestive system churns out 250 to 500 liters of methane per day, which is an unpleasant fact that lit a light bulb in engineers’ minds: A cow’s gas could, well, light a light bulb. Methane can burn cleanly in stoves and even generate electricity. The team at BioD plans to apply the principle to turn farm waste into usable energy in Madagascar.

BioD, based in Washington, DC, has reimagined the biodigester for homes in the island nation, which is one of the most impoverished and biologically diverse spots in the world. The team plans to pilot its technology in a community in Madagascar.

Biodigesters work the way a stomach works, sort of. You shovel manure, food scraps and other organic material into a closed container, let bacteria and other microbes break it down, then harvest the methane gas that they produce in the process.

If they’re used properly, they can cut down on the amount of wood burned for cooking, which can reduce deforestation, clean up the air in the kitchen and help families save money.

See how a biodigester works in the video below.

What’s new about BioD?
Many biodigesters are large, underground infrastructure made from concrete and they can cost upwards of $1000 in parts of Africa. They’re expensive for poor families and difficult to install and maintain.

BioD has made a smaller, less expensive digester using materials that are found locally in communities in Madagascar.

The BioD biodigester is smaller, lighter and made from locally sourced materials. Image by Hatch International

Our design is unique in that it’s small enough to serve a single household, and could even be picked up and moved around. Since everything is above ground it’s easy to troubleshoot and repair if necessary.

Caroline Angelo, an electrical engineer and Co-Director of BioD.

The latest in a line of prototypes

The BioD team set out to make biodigesters more accessible in 2010. Back then, they were trying to build on existing designs. A “After several iterations and frustrations we decided to start from scratch, focusing on the biological processes and materials that are locally available in developing countries,” Angelo says.

They’ve since built two prototypes in their home base in Washington, DC, one in Brazil and another in Madagascar.

The team builds a prototype in Madagascar. Photo by Hatch International

The key to successful distribution

Now the team is planning to head back to the country to test the prototype and research the market for training, distribution and sales. BioD’s distribution plan echoes many of the elements of successful distribution for appropriate technologies worldwide. The team will train local entrepreneurs to build and sell the biodigesters, and they’ll help families to afford them through financing. But they won’t do it alone.

“The key to our success has been local partnerships. We have established strong relationships in Madagascar with civil society organizations and university students, that has ensured that our product is not just technically appropriate, but is culturally sensitive and harnesses local skills and materials,” Angelo says.

So you want to make a biodigester

You’ll find a construction guide for a conventional biodigester in Our Solutions Library. And if you’re looking for more depth, Angelo recommends The Complete Biogas Handbook, by David House.

Solar-Powered Refrigerators on Camel Back Can Stock African Clinics

Vaccines and other medical supplies travel to rural Kenyan communities on camel back. They are the chemical contingent of a mobile clinic called Mpala, which serves villages that are inaccessible by Jeep or Land Rover. The vaccines are fragile and packed with ice into crates. The crates are strapped to wooden frames and borne around the camel’s hump. While traveling in the Kenyan heat, the ice can melt and the...