At nearly 130,000, Botswana is home to more African elephants than all other African countries combined. Those elephants have begun exploring beyond the national parks, encroaching into areas where Botswanans live. This is a problem for people, since elephants that encounter human settlements fight with livestock for water and raid crops in the night. Angry farmers have been known to tip off poachers to the locations of elephants, or even set traps themselves.

My teammates in the International Development Design Summit were each from different villages in Botswana. After a brainstorming sessions during which we identified the problems, we proposed developing a device for farmers to manufacture their own elephant repellent. To arrive at that solution, we started with information from a local non-governmental organization called Ecoexist, which found that elephants are afraid of fire, smoke, bees, and electricity. We knew that electric fences are too expensive for most smallholder farmers, and not culturally suitable to protect ranchers’ water points due to the practice of free range livestock in Botswana.

My team, composed of three locals and myself, got to work testing recipes for what we call a “chili briquette.” When burned, the smoke from the briquettes can turn away unwanted elephants. The bulk of the briquette is elephant dung itself, which is easily found close to villages where people gather firewood. The second ingredient gives the smoke an extra elephant-repelling kick – chili peppers. Cooked sorghum porridge, a common breakfast food, was used as a binding agent. After conducting user research, our team identified a need for the chili briquettes during the rainy season when farmers plow, and the elephants come to eat the crops. Knowing this, we designed a mbaula (metal stove) out of a paint can with a lid for keeping the rain off the burning briquette.

After testing the burning bricks ourselves (sadly no elephants signed our research agreement), we identified a recipe that makes strong, irritating chili smoke and burns slowly to last all night. The chili briquettes use a ratio of ingredients of 2:1 elephant dung to chili and a ratio of 20:1 elephant dung to soft porridge. The overall recipe is 20:10:1 dung to chili to porridge. This contains the right amount of chili to produce strong-smelling, irritating chili smoke, and the right amount of fuel and moisture in the chili bricks for them to dry quickly and to burn for a long time. According to the farmers who have tested bricks so far, five nights of continuous burning are enough for elephants to change their corridors to stay away from the fields.

The chili briquettes are such a cheap and simple solution to the elephant problem in Botswana that there is high demand for a business to make and sell them to farmers and ranchers. My team used sketch modeling to design and iterate a press mechanism that could produce enough force to compress the briquettes on a commercial scale.

Importantly, my team members were not experts in engineering or design, however one goal of the International Development Design Summit is for participants to learn through trial and error. Accordingly, the first prototype we built was a wooden box that was hard to clean between uses, made briquettes that were too small, and lacked the force to compress the briquettes properly.

Our team split into two after creating the first prototype. I worked on the stove and tested briquette recipes while others began building a second press. That press was larger, made from metal and had a handle that raised and lowered a heavy concrete block into a removable mold. Upon testing, however, we found that this prototype was too expensive and mechanically inefficient to produce affordable and well-compressed chili bricks. Our time had ended at the summit, but before parting, two members of the team, Arthur and Pihelo, agreed to continue developing the technology in their home villages of Kaputura and Rakops.

At the end of the summit, many participants reported that they felt empowered to continue applying the design process to solve everyday problems.

Although the summit is finished, there are now two new businesses in my teammate’s home villages of Kaputura and Rakops making and selling chili briquettes. The two innovation centers established as part of the summit will help the entrepreneurs with tools, design help, and business support as they scale up and protect many more elephants and humans from each other.

For details on the chili briquette press design and results from the seven other projects and businesses launched at the International Development Design Summit Botswana, please see our Final Report. 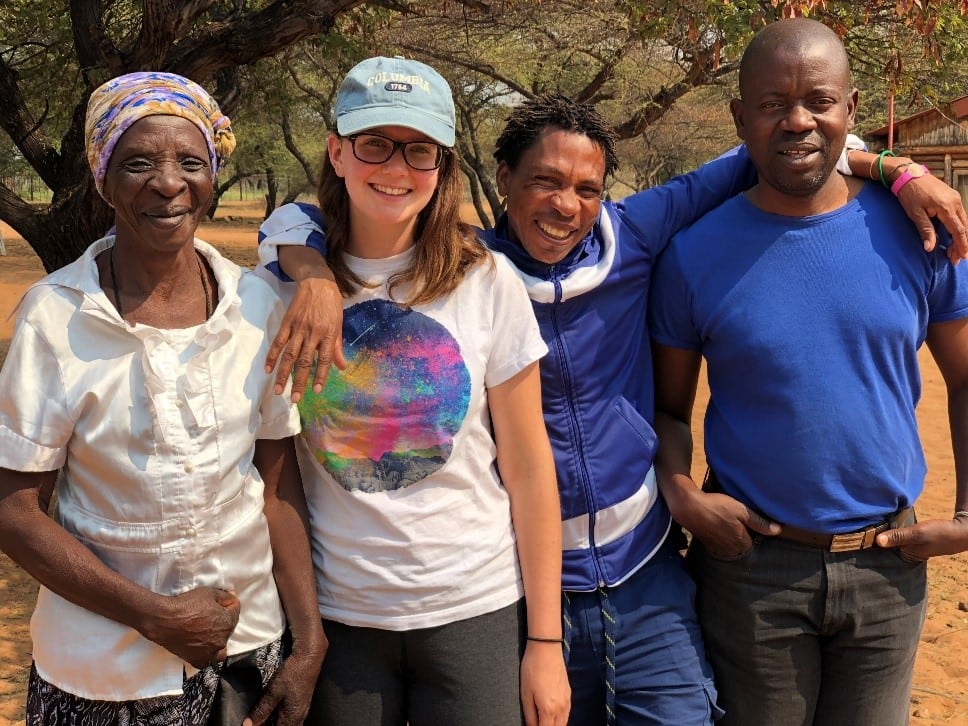 Anna Libey is an Engineering for Change Research Fellow and an environmental engineer in the sector of water and sanitation for international development. She is pursuing a MS in Environmental Engineering and Engineering for Developing Communities with a water and sanitation focus at the University of Colorado. She has volunteered with Engineers Without Borders in Ghana, worked for a circular economy and Internet-of-Things startup called Citizengage in Bangalore, and the water research organization Caminos de Agua in Guanajuato, Mexico.

Fascinating, curious people who love to learn gathered at World Maker Faire this year to share what they have made. Some people made an electric giraffe, others made a crocodile ride and there was a tent workshop on lockpicking, but a few talented people built things that can improve people’s lives, especially in developing countries. E4C’s content strategy manager, Iana Aranda, visited the event and captured some of the creativity...