Elizabeth Hausler, third from the left, stands with a homeowner int the Philipines, and staff of Build Change, the post-disaster reconstruction non-profit she founded. 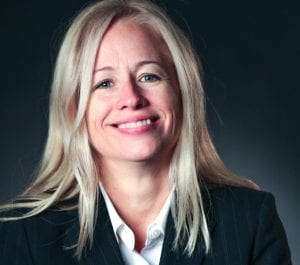 The aphorism that insanity is repeating a mistake and expecting different results could have been written for the disaster recovery sector. For years, and even now, it has not been rare to see funds spent on rebuilding in areas that are known to be at high risk of another disaster. Zones prone to periodic flooding are an example. Cutting corners has also been common in reconstruction, with owners and donors favoring speed and low costs over disaster-resistant construction that could save lives and money when the inevitable strikes again.

Dr. Elizabeth Hausler has been credited with fomenting change in the sector, emphasizing the importance of resilient construction and responsible planning with foresight and the expectation of future disasters. Build Change, Dr. Hausler’s non-profit based in Denver, Colorado, designs disaster-resistant homes and schools and trains constructions crews and owners in best practices to reduce the damage from future disasters. Dr. Hausler’s influence is felt throughout the disaster-recovery sector. Policy makers have taken up the cause to emphasize resilience and prevention.

Her work has accrued a pile of prestigious awards, including the Schwab Foundation’s 2011 US Social Entrepreneur of the Year, a 2017 Skoll Award for Social Entrepreneurship, and the inaugural Mortenson Center Award for an Outstanding Professional of Global Engineering in 2019. Dr. Hausler earned her doctorate in Civil and Environmental Engineering at the University of California, Berkeley, and her alma mater also awarded her with the Campanile Excellence in Achievement Award in 2018.

E4C: You are credited as an influence on the disaster-recovery sector, emphasizing the importance of disaster-resistant construction to reduce damage from future disasters. Have you, in fact, nudged the entire industry in a new direction?

1. Away from giving away houses (donor-driven, top-down approaches) toward giving conditional cash plus technical assistance (homeowner-driven approaches). When we started, most NGOs were mass producing like houses for everyone, oftentimes without taking into consideration local cultural and climate preferences, local materials, the opportunity to train local builders on the job, and so on. Now, most NGOs and many governments (Haiti, Nepal, Mexico, China, Philippines) often use “homeowner-driven” reconstruction approaches, in which the homeowner is given technical assistance to design and build the house, plus cash grants in installments (contingent upon meeting building standards) to purchase materials and hire local labor. This often allows for capacity building for local builders, and purchase of local building materials, putting more money back into the local economy.

2. Away from “sweat equity” toward “decision equity.” In the old days, NGOs looked at homeowners as a source of cheap labor, as dependent beneficiaries, and so on, and did not involve them in the decision-making process. This undervalues them in the labor market, among other negative consequences. Plus, when homeowners make decisions about where is the toilet, kitchen, front door and so on, they are more likely to invest in the safety of their home. We have many stories of happy homeowners on our website.

3. Away from temporary or emergency shelter toward permanent solutions. Time and again, we’ve found people would rather invest in a permanent home that may take a little longer to build or retrofit rather than receiving a temporary building that will last only a few years. After the 2009 earthquakes in West Sumatra, Indonesia, the international NGO and donor community came in and wanted to give everyone T-shelters, transitional shelters. We’d worked in Indonesia since 2005, our team was entirely Indonesian, and we knew that wasn’t what people wanted, so we pushed back and several NGOs instead gave cash and TA.

4. Toward retrofitting, or strengthening existing or damaged buildings. When we started, people said strengthening or retrofitting an informally built masonry building in an emerging context couldn’t be done. We’ve shown it can be done safely, cost effectively, and at scale. We’ve retrofit buildings in Colombia, Guatemala, Haiti, Philippines, Indonesia, Nepal, and done retrofit surveys and designs in several other countries.

E4C: Retrofits sound like they are key in disaster mitigation. Would you say more about your approach?

EH: Many of the houses built around the world in emerging countries are built informally (without professional design, without permits, etc.) and are built with systems that are very susceptible to collapse in earthquakes and windstorms, such as under-reinforced or unreinforced masonry (URM) or timber (particularly for the case of windstorms). These buildings often lack key elements for disaster resistance – such as a complete load path, because they are missing connections between elements from the roof to the foundation – and frequently have prominent configuration deficiencies which are known to cause collapse – such as long or tall unbraced walls and open fronts or unbraced URM. Through our projects in Colombia, Guatemala, Haiti, Philippines, Indonesia, and Nepal, and studies elsewhere, we’ve shown that the life-threatening deficiencies in these buildings can be addressed and mitigated using simple, locally available solutions when applied intentionally.

EH: The retrofit approach we’ve taken is to ensure that the building has an adequate load path for both in-plane and out-of-plane forces, and then work on reinforcing that load path to meet the demands of natural hazards. This includes work such as:

In addition to completing the load path, the retrofits increase strength and ductility through improving the quality of the low-strength masonry walls with overlays, such as cement plaster or steel-reinforced cement plaster, and in some cases, by installing reinforced concrete confining elements around URM wall panels in masonry buildings. In timber buildings, strength is typically increased by adding bracing or sheathing to walls.

E4C: In what other ways are you and Build Change doing things differently from others in the sector? And what are you are advocating to improve now?

EH: We’re working on preventing the disaster – strengthening buildings before the next earthquake or typhoon.

We’re applying a holistic model – engineering, technology, access to finance, capacity building, policy change. Most organizations specialize in only one part of the construction value chain, we do it all.

EH: There is so much good engineers can do in the world. Especially when they partner up with policy experts, finance experts, and so on.

India has almost achieved the historic goal of connecting every household to the electricity grid. The next challenge is to provide 24-7 power for everyone. According to a new independent study by the International Institute for Sustainable Development (IISD) and The Energy and Resources Institute (TERI), switching subsidies from kerosene to off-grid solar products would improve electricity access for households still reliant on kerosene. I grew up in a small town...