Higher technology like this used to grow lettuce may be necessary in developing countries in the near future. Photo: Kathleen Phillips / Texas A&M AgriLIfe Research

Articles about the future of food and farming have proliferated online for years, including on this site, and they may be even more accurate than suspected. Critics can dismiss predictions about large-scale urban farming or the integration of digital technology with an historically low-tech industry. And concerns about the high costs of those enterprises are founded. But a new report presents the case that high-tech farming is not just a technotopian dream or even the product of global development naivete. Rather, lab-grown meat, vertical farms and app-managed agriculture may be necessary for developing countries as they struggle to feed their growing populations.

Fred Davies, faculty at Texas A&M University, and Banning Garrett, a writer, speaker and consultant on issues in US national security and technology, are senior fellows at the Global Federation of Competitiveness Councils where they co-wrote the report. Their work is a rare comprehensive overview of existing technology and speculated developments that, the authors argue, are needed for sustainable farming developing countries. The report describes “urban food ecosystems” that must adopt increasingly complex technologies, including devices that have not been invented yet, if developing countries are to produce enough food in the next two or three decades.

“The food production systems we write about do exist. The question is to refine and adapt them to the particular location they are being used so they are commercially scaled-up,” Dr. Davies told E4C by email.

“Some production systems, i.e. cell culture of meat, chicken, etc. have yet to be commercially scaled up because of technical challenges and costs (these challenges will ultimately be addressed – which is why these are “longer term”),” Dr. Davies says. Others are in development or they are still speculation. Those include robotic, GPS-enabled planters, harvesters and other machinery, the constellation of sensors needed for precisely measured inputs and artificial intelligence to orchestrate the devices and make sense of the big data generated.

The goal, according to the report, should be to streamline the production and distribution of food, connecting production to markets in cities and city fringes. The concept is illustrated in the figure below. 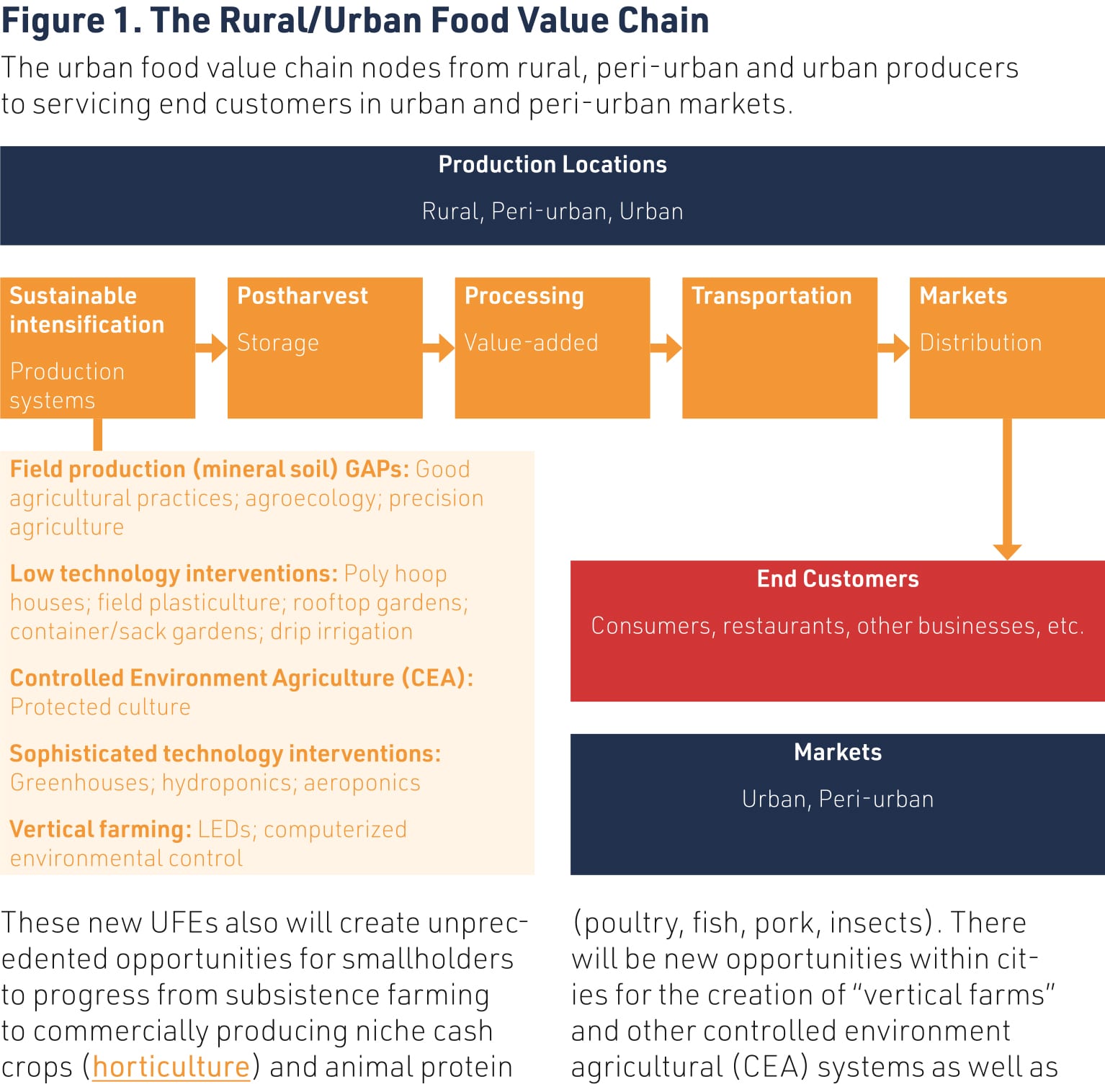 To get there, the authors identified 12 classes of technology that can improve agriculture and foster the kinds of ecosystems that may be necessary in food production in developing countries. Each of the 12 are divided into three categories: current technology that is under-used and could be scaled up; near-term technology that is coming soon; and technologies that may be coming later, more than five years from now. Each category presents opportunities, both for enterprising entrepreneurs and for engineers with ideas about improving and scaling software and devices. These are the 12 classes. 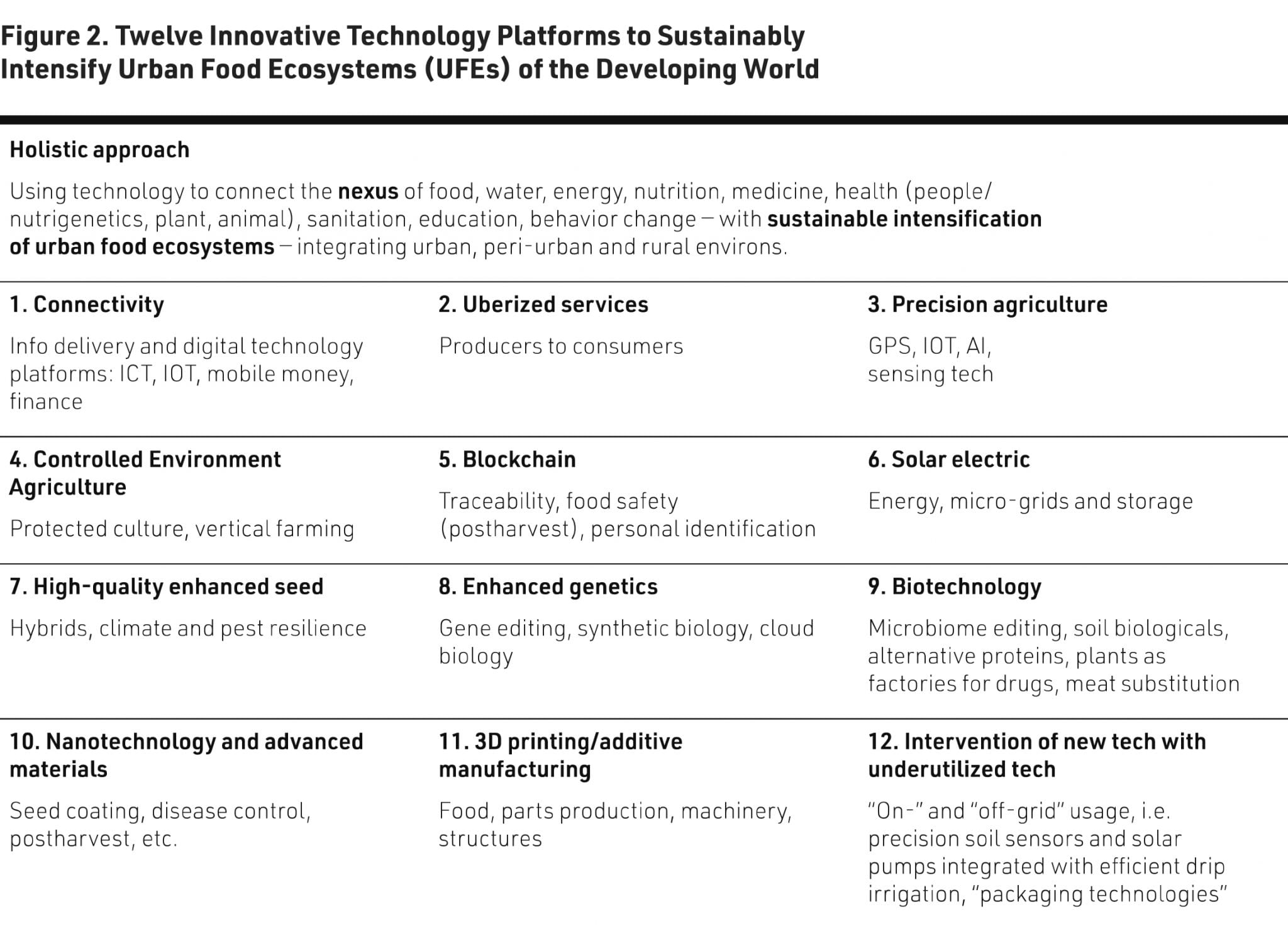 What can engineers take from the analysis?

“From an engineering standpoint it is not that we have new technology ‘X’ to use and how do we deploy it, but rather it is figuring out where the bottlenecks are in the urban food system (as you know, innovation is all about overcoming bottlenecks), and by ‘learning from the locals’ where those bottlenecks are and using their ideas,” Dr. Davies says. “The technology platforms we propose are very doable and take into account that a given technology must be sustainable economically, environmentally and socially acceptable.”

Dr. Davies uses number 12 in the list above as an example. Low-cost drip irrigation systems are under-used in Africa. Combining them with off-the-shelf soil sensors and solar-powered irrigation pumps, then linking the whole network to the cloud to analyze the data it generates could ‘make dramatic inroads’ into sustainable agriculture in Africa, Dr. Davies says.

But is all of that necessary?

“Sub-Saharan Africa is doubling its population in 20 years, and two of the world’s six largest cities will be in West and Central Africa. They cannot feed themselves today, and there will be a severe food crunch if technology is not adapted along with good agricultural practices,” Dr. Davies says. The example of irrigation may have been especially appropriate given how little it is employed in Africa.

“Only 5 percent of sub-Saharan Africa is irrigated, which is a recipe for disaster,’ Dr. Davies says.

The example serves a second purpose as a look at the need to adopt technology in packages of synergistic things rather than the piecemeal uptake of single devices.

“A given technology by itself is useless,” Dr. Davies says. Another example of the package approach appears in the report on pages 35-36. Kenyan entrepreneurs employ a package of technologies to produce and distribute vegetables to city markets. The package includes hybrid seeds, drip irrigation, modified controlled environments using plasticulture and screened poly houses that keep insects out, microfinance, insurance, mentorship, training and extension to learn good agricultural practices and how to connect to markets.

The myriad articles that celebrate the next big thing in farming or the future of food can leave an impression that there has been (or will be) a shotgun blast of technologies on farms around the world, but Davies and Garrett have heard a signal in the noise. Their report presents disparate technologies as parts of a network, a package that must be adopted and improved for the world to feed itself in the near future.