How can rural villages manage mountains of empty plastic bottles?

What can rural communities in Guyana do to handle mounds of plastic bottles in their trash?

“Plastic waste is a huge problem for Guyana,” Scott Stadum, vice president of Friends and Returned Peace Corps Volunteers of Guyana (FROG), told Engineering for Change. “People throw trash into the sewer, thinking that it will disappear somewhere. In 2005, there was major flooding along the coast, and part of the problem was that these drainage systems were so clogged with waste that water couldn’t get back into the ocean from the canals. And this, of course, causes all sorts of health-related problems.”

Stadum posed the bottle question on behalf of the Karanambu Trust, which conserves Guyana’s Rupununi wetlands and the otters that live there. Communities in the region’s watershed struggle to manage their empty bottle waste.

We reached out to the international community for answers. You sent us a cartload of tips, detailed plans and brainstormed ideas to help them. This is a compilation of the options proposed, but the question is open. Please share your suggestions. 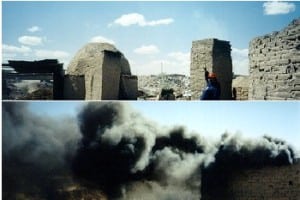 Plastic bottles and other combustible waste can safely fuel a modified kiln. Robert Marquez developed a kiln that filters the effluent through unfired clay, which recycles the heat and reduces the contaminants that escape into the air. Jim Hallock, a member of E4C who specializes in compressed-earth block construction, has built these kilns and proposed them as a means of managing Guyana’s plastic waste.

“Look closely at the effluent from the Marquez Kiln,” Hallock wrote referring to the photo at the left. “You will need to look closely because that little puff of white steam really is the effluent!”

In contrast, other kilns that do not filter the effluent can produce dark billows of smoke. For more information, contact Hallock. 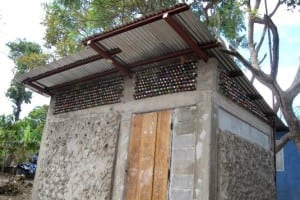 This building in Nicaragua is made from plastic bottles. The method is cheap but time consuming. Photo courtesy of Winnie Qiu

We put the question to LinkedIn, and members of two different engineering groups suggested plastic-bottle construction. Winnie Qiu, a member of Engineers Without Borders-USA, sent photos of the build with bottles in Nicaragua shown below. She also mentioned a caveat.

“One of the issues that our NGO friends found is that building with bottles is time consuming,” Qiu says. “It is not as easy as we think to collect and sort waste. It took weeks to collect bottles of the same size to build a 10 square meter house.” 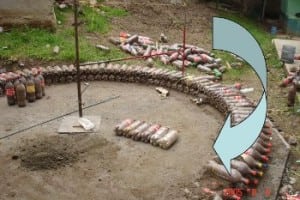 This water tank in Honduras is built, in part, from plastic bottles. Photo credit: Eco-Tec manual

Jeff Hamer, in the same LI group, says “The Chicagoland professional chapter of EWB-USA has a project in Candelaria, Honduras that used plastic bottles filled with sand to build walls for holding cells in a recycling facility.” He refers us to his chapter’s web site and says he can put those interested in touch with the project’s leaders.

Leonardo Salinas, a member of the Engineers Australia LI group, suggested building a water tank out of bottles.

“Last year, in Bolivia. I coordinated the implementation of a couple of projects using plastic bottles for the construction of water storage tanks for rain water harvesting,” Salinas wrote. He posted a link to a manual for building the tank. It’s in Spanish, but, as Salinas says, non-Spanish speakers can get the idea from the images.

Solution in the works

The University of California, Berkeley chapter of EWB-USA, together with the San Francisco Professional Chapter’s Appropriate Technologies Design Team, may have a solution in the pipeline.

“We are at the early stages of a project to tackle this very issue,” Dominic Molinari, at UC Berkeley, says. “We have plans to design a hand-powered grinding system to turn bottles into pellets, and then mold these pellets into non-structural building material using local stove technology.” The design is unfinished, but the two EWB-USA chapters have more information available for those interested.

Communities in emerging economies can convert their waste plastic into a fuel oil that can be used as a drop-in substitute for diesel or kerosene. The University of Kentucky Appropriate Technology and Sustainability (UKATS) Research Group implemented a pilot test of the process in Kampala, Uganda, in collaboration with Makerere University and Institutional Energy Solutions.

Rotterdam in the Netherlands may become the first city to repurpose one of Earth’s biggest pollutants by paving its streets with plastic bottles. The Rotterdam City Council is working out a way to efficiently pilot a new type of plastic road surface since their initial declaration in 2015. While the process is still ongoing in the Netherlands, a UK start-up called MacRebur is succeeding in persuading local councils to use plastic to pave new roads. Cumbria in northwest England has become the first county to turn its local waste into roads.

The idea may not gain traction (get it?) in emerging economies, however, until the technology is suitably advanced.

See: Roads Paved with Plastic Bottles Make Use of an Ecological Threat

How about hydroponic farming with soda bottles? “This isn’t necessarily the most cost-effective, but it’s a really cool concept!” says Hannah Kates in EWB-USA’s LI group. “Depending on the community’s needs, maybe the idea could be adapted,” she says. 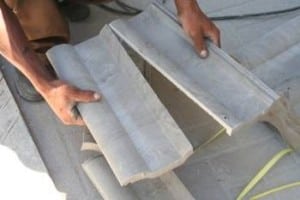 These tiles are made of recycled plastic waste. Photo courtesy of Jim Hallock

Jim Hallock had another suggestion: melt the plastic into roof tiles. The tiles pictured here are part of an attractive roof on a South African house.

Another option: Pulkit Gupta, in Engineers Australia, suggests carpet. “Most commercial carpets are made out of plastic bottles. Find buyers of such products so that the community make some money doing it.

And here’s a web site detailing efforts to compress plastic waste into bricks for construction.

And finally, Grant Bajema, in Engineers Australia, reminded us about a very simple way to use plastic bottles: Solar water disinfectors.

We have a good start with the brainstorm represented here, but we could use more detailed plans or tips from those of you who have tried the ideas already mentioned. Please share your expertise in the comments section below.

One of the newer sad facts about poverty is that it makes the coronavirus harder to contain. Three billion people do not have access to handwashing facilities at home, making it difficult to perform on the basic preventive measures to protect against infection. Global aid organizations are aware of the fact. This week, I had the fortune to attend the launch of the United Nations SDG (Sustainable Development Goal) 6 Global...