China has been burying itself under a mountain of toxic sludge, but one startup may have a technological solution. Innov8tia has developed a microwave pyrolysis reactor that decontaminates industrial sludge, converting it into valuable gases and chemicals.

China’s sewage and industrial sludge has contaminated water and soil with heavy metals, pesticides and pathogens. Some of the waste goes to landfills that will accept it, but illegal dumping has been easy and cheap. “To dispose of 500 tons of toxic sludge in the south China city of Guangzhou, all you need is a hired boat and a little money for petrol,” Yang Dazheng and colleagues write in Chinadialogue. There may be change on the horizon after a nationwide government crackdown on polluters in late 2017 that swept up 12,000 officials and fined 18,000 companies. The Dafeng Pesticide Factory in Yancheng City, 250km north of Shanghai, closed during a surprise inspection, then turned to Innov8tia for help processing its sludge.

The process converts sludge into hydrogen and syngas and more than 70 valuable chemicals, carbon nanotubes and water.

Test runs of two scaled down versions of Innov8tia’s reactors found that they could convert 30—35 percent of a Dafeng sludge sample to char, and 65—70 percent into gas, most of which was hydrogen and carbon monoxide. Both gases are valuable. Hydrogen is used in the petroleum and chemical industries and as a coolant, and carbon monoxide, also called syngas, is used in chemical manufacture, meat packing, medicine and even lasers.

The process also yields other useful materials including carbon nanotubes and more than 70 chemicals (levoglucosenone, furfural, phenolic compounds, 3-aminopiperidin-2-one, D-allose, cresols, vanillin and others) that value (USD) $1200—$250,000 per ton.

The process is more efficient than traditional pyrolysis at harvesting materials from sludge, and it generates more energy than it requires.

The three-person Innov8tia team graduated from the Vatican’s Laudato Si Accelerator in December 2017 and returned home with seed funding of $100,000 convertible note (an investment). Now the team has moved into a 530m2 warehouse in the Ningbo National Hi-Tech Zone, a government-operated technology park. Their neighbors are 30 other startups, all better funded than they are, says Seth Knutson, one of the co-founders. 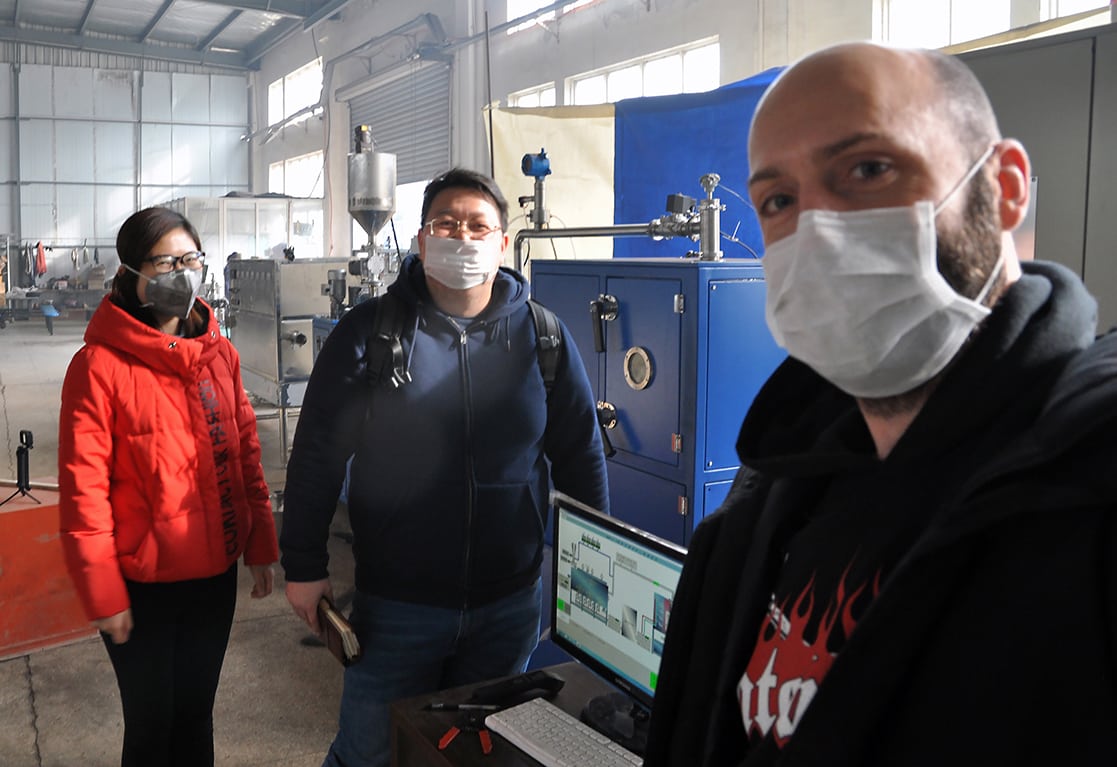 “Our current reactor system, capable of treating 20-40 kg of sludge per hour, is up and running in this facility, although it’s essentially an empty warehouse right now,” Mr. Knutson says. “This is the largest, and we think only, microwave pyrolysis industrial sludge treatment system currently in operation in the world. Innov8tia should be the first company in the world to offer microwave pyrolysis systems for industrial sludge treatment.”

The other co-founder is Dr. Kaiqi Shi, a chemical engineer who developed the microwave pyrolysis technology while studying at the University of Nottingham’s China campus. Dr. Shi developed a self-cleaning nickel catalyst that converts more of the sludge into gases and less into char. Thus, the microwave process harvests more materials from sludge and requires less energy than traditional pyrolysis.

The machine pictured above is Innov8tia’s first commercial system and can treat 500kg of sludge per day.  The technology has been independently certified by a group at the Chinese Academy of Science, the team’s patent won an Innovation Award from the China government, and the prototype was independently verified by a group of industry experts.

One of Innov8tia’s first jobs in its new headquarters is to test sludge samples sent from a leading international environmental services provider, a relationship forged in Rome during the accelerator. No agreements have been signed, yet, and the company will remain anonymous until a possible future public announcement.

In the meantime, a technology like Innov8tia’s has a vast market in China. The Chinese government has pledged to clean up the country’s polluting industries, and companies may be seeking legal means of treating their waste.

Communities in rural Kenya are still heavily dependent on wood fuel and other biomass for their basic energy needs. Reliance on biomass can lead to health and environmental deterioration: respiratory illness from smoke inhalation, eye strain due to poor lighting, and air pollution. The development of renewable energy resources in rural areas can help to reduce these problems. Exacerbating the current issue is the difference in energy sources used by...