This water tank serves an informal settlement of immigrants to Chile. Lack of water access is one of the biggest challenges the community faces, according to a survey by the author and fellow students at the University of Chile.

Informal settlements are hidden in Chile, the wealthiest country of Latin America. How can engineers and humanitarians help? The Institute of Electrical and Electronics Engineers (IEEE) University of Chile Student Branch has taken first steps toward solutions, and seeks help to go further. 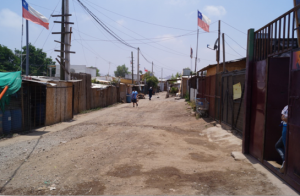 Chile is an economic contradiction. The country has one of the fastest growing economies in Latin America, and it is the second Latin American nation invited to become a member of the intergovernmental Organisation for Economic Cooperation and Development (OECD). At the same time, however, Chile is the third most unequal country among the OECD’s 36 members. The reality of people living under the poverty threshold in Chile remains hidden within more promising economic statistics, but my fellow students and I at the University of Chile are trying to reach out to those most in need.

The number of people in Chile living in poverty, those who earn less than USD $5.50 per day, has decreased by an order of magnitude in less than 20 years, from 30 percent in 2000 to 3,7 percent in 2017. However, with a total population of 18.8 million, 66,600 people still live in high economic vulnerability.

In 2019, 47,050 families lived in 802 informal settlements (camps), according to figures from the Chilean Ministry of Housing and Urban Planning. In this context, a camp is defined as a precarious settlement composed of eight or more households, which claim irregular possession of the land, and lack at least one of the basic services (electricity, water and sanitation), and whose households make up one socio-territorial unit. While people living in camps are partially supported by public policies, the situation is more precarious for immigrants. As of 2018, immigrants represented 28 percent of the families living in camps. Immigrants travel to Chile with expectations of a better life, knowing it is one of the most prosperous countries in the region. Unfortunately, many of them do not get jobs, and many end up undocumented. Families are then forced to move to the camps where they face enormous difficulties to access basic services. 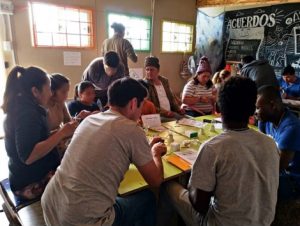 In response, my fellow members and I of the Special Interest Group on Humanitarian Technology (SIGHT) of the IEEE University of Chile Student Branch decided to get involved. Through a contact with Fundación Techo Chile, we were able to get in touch with a leader from one of the largest camps of immigrants in the outskirts of Santiago de Chile.

In our first visit, we saw the precarious conditions that families living there have to face. The settlement is located next to an illegal dumpsite. It has no access to pipe water, lacks formal sewage systems, and has unreliable electricity access  Although the camp is connected to the power grid,  many households have precarious electric installations prone to failure and electrical  fire. Moreover, the houses are constructed with light and flammable materials; a fire could spread quickly through the camp.

To solve one of the immediate problems, we designed a pilot workshop to provide technical training in domestic electrical installations. Sponsored by Schneider Electric Chile, we were able to provide protection devices, interrupters and other domestic equipment. Master’s students provided training to the volunteers, aiming to deliver solid knowledge about what untrained people can and cannot do. The topics spanned from electrical wires, series and parallel electrical circuits, electrical symbology, tools and their handling, feeders and protection schemes for domestic electrical installations. The workshop was successful; 13 members of the community received training as a result.

Our SIGHT partnered with the External Links Division of the Engineering Faculty at University of Chile to continue the project through 2019 and the beginning of 2020. To understand the scope of the problem, we conducted a prospective study into the state of the camp’s basic services in January 2020. The research found that the most urgent needs of the camp are clean water access, followed by the hazard of fire in the illegal dump, which could spread easily to the adjoining houses and the rest of the community.

Along with this research, we held a set of weekly workshops for children. The goal was to get them interested in science and technology. Up to 20 children attended each Saturday, engaging in experiments in physics, earth sciences, and more. Our SIGHT concluded the summer intervention with a visit to the Interactive Museum of Science and Technology (MIM), where children spent the day learning and playing through activities related to science, technology, engineering and mathematics (STEM).

Now that we have discovered some of the key issues, our SIGHT is seeking new partnerships to help us improve access to basic services in the camp.

The coronavirus pandemic and resulting strict lockdown in Santiago has limited our movement on our plans in 2020. But we have engaged with an aid organization to help provide money to immigrants in the camp that they use for food and other basics.

We would like to partner with a new organization such as an NGO, the municipality, other departments in our university, companies or even individuals in the region who can support our work on the two most concerning problems: water access and waste management, including management of the illegal dumpsite.

If you can help, please write us a note in the comments below.

Pía Vásquez is a Research Fellow at Engineering for Change and a masters student in electrical engineering at the University of Chile. During her master program, her research focused on the degradation of solar photovoltaic modules operating in rural communities of the Atacama Desert. Since 2019, Pía has also led the SIGHT of the IEEE University of Chile student branch.

Old Fused With New: Sustainable Architecture Where It Is Most Needed

Sustainability in architecture has manifested as buildings that process waste and cool themselves, and as a revival of old construction methods with new design. Locals and visitors to the world’s rural and impoverished regions are building with locally sourced materials, assembled by locally trained labor using a fluid blend of new and old techniques. In presentations this October at South by Southwest Eco in Austin, Texas, we saw evidence of engineers employing best...