Pipes, Pallets, Snowboards and Jars: How to upcycle with style

Three fates await the typical empty plastic bottle: refuse, reuse or recycle. Reuse delays the inevitable. Recycling keeps it out of the trashcan, melts it down and molds it into something new. Like maybe a trashcan. But recycling, as green as it is, costs energy. We’d like to mention a fourth option: Upcycling. Upcycled, the bottle becomes a skylight for Indonesian homes, a chair, a school, or even an island.

Upcycling adds value to waste while retaining something of its original nature. The process is heavier on creativity than on energy. Seeing purpose in trash is the upcycler’s challenge.

We spoke with five upcyclers who make striking products from unusual materials and sell them at the arts and crafts site Etsy.com. Upcycling can be deeply artistic and lends itself well to decorations and trinkets, but we sought out makers of things that aren’t just attractive, they’re also useful. This is a glimpse at the practical side of upcycling. 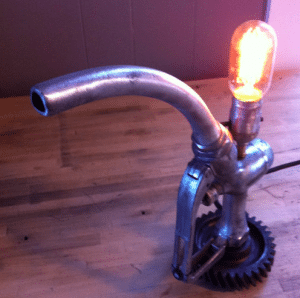 From his home workshop in Del Rio, Texas, Grant Dupill makes living room furniture out of discarded sports equipment and spare parts. His house looks ridiculous, he says, strewn with works in progress. But his corner of Etsy is amazing. It’s a strange kind of Americana wonderland.

“I’m obsessed with lamps,” Dupill told E4C. “Most of the items on Etsy are lamps that I’ve managed to create out of just completely random things. A couple are made out of gas pump handles, machinist equipment, pipeline parts. I’ve made tables and chairs out of everything from sawmill blades, tractor seat and milk cans, a lot of farm equipment.

“My goal is to keep working hard and turn this into a full time thing, because this is what I like doing. I feel good when I take something that was discarded and turn it into something that people want to see, and that’s useful. That’s rewarding for me, I like things to be pretty and functional, too.”

Pro tips: How to get started


“It’s kind of cliche, but just go ahead and do it, don’t just sit there and wait and think that I can’t do this. Just do it,” Dupill says. “One thing I found throughout the last few years is that I had several things not come out the way I wanted them to, but I kind of brainwashed myself to appreciate what it is. Before you had what was essentially trash and now you have something useful and nice to look at.” 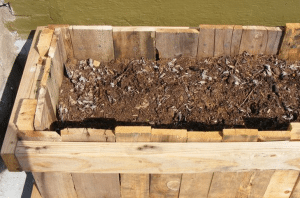 Britt Maher makes rough-hewn planter boxes, benches and tables from wooden shipping pallets. The aged wood and uneven cuts impart a raw look to Maher’s crafts. His carpentry has been a hobby for 15 years.

“I have always tried to be different in my woodworking,” Maher told E4C by email. “It is what sets my items apart from others.

“I use wood that has been upcycled from skids and pallets. It can be difficult to take the skids apart because they are made with nails with spurs on them, which keeps them from backing out on their own. I try to preserve the pieces of wood as much as possible when I disassemble the skids, instead of cutting them with a saw.”

Upcycling as a design challenge


“To use upcycled wood is a challenge, which is part of the reason I do it. I see it as a design and engineering challenge to come up with something, then to reverse-assemble it on paper or mentally, and try to use what materials I do have or can get from the skids I have on hand. Anyone can go to a lumber yard and buy wood. But how many can design something from something that’s already there, just rearranged?

“I use pallets because they are plentiful. They are diverse in size, structure and type of wood. They add a characteristic of being rustic or authentic without having to add a process of some sort to get that effect. I also got tired of seeing them being thrown away into dumpsters or mulched, when they have such potential.” 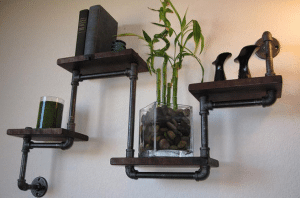 “About a year ago, I started seeing things that some people think is trash or junk and then I would repurpose it into furniture, or whatever, for myself,” Maher told E4C by email. “As other people started seeing it, they wanted one. So, I would make them one as well. I am really just kind of getting started.

“I like old stuff and unusual stuff. It is amazing what some people will throw away. My latest thing is an industrial floor lamp using a flywheel off of an engine for the base. Then I attached some plumbing pipe and an old filament bulb and it makes a unique and interesting floor lamp.” 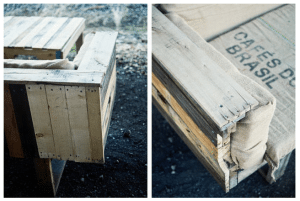 A pallet and burlap sofa by Corey Russell

“The wood I work with the most is old pallets or skids. Most of them are just left on the side of the road or in allies because business don’t want them,” Russell told E4C by email.

“I am a Christian and so my work and faith is greatly intertwined. Upcycling is a way to take care of the place God has given us, to help beautify our city.

“All the stuff I get other people want to throw away or burn, and I get to say, ‘No. This stuff is beautiful it has worth.’ So I take it and work on it, clean it up and I bring out the beauty that was there the whole time. The same way Jesus has done that with me and my family.”

Pro tip: Where to get the wood

“If you are looking for some cool wood to work with, hit up your local museum for old shipping crates. Most of the time they just have them in storage and they break them down and throw them away.” 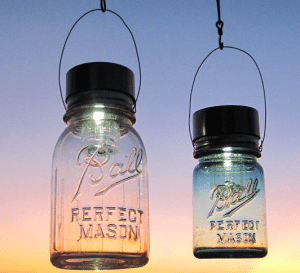 Photo by Nadine at TreasureAgain / Etsy

Hanging Mason jars add a twinkle to solar LEDs and the combination can complement a country porch or a garden in the city. Nadine from TreasureAgain on Etsy (no last name given) has made upcycling a lifestyle, and she stumbled on the solar idea when trying to rescue broken garden lights.

“My idea started when I found some broken solar lights that my nephew had hit with the lawn mower. I picked up the pieces thinking I would use the spare parts. I brought them home and set the light top on a jar I had sitting outside that I needed to wash. At night, when it lit up, I noticed how pretty the light was shining through the old glass. I worked with the design for quite some time and created my Twist-On-Lid Mason Jar Solar Light design.” Nadine told E4C by email.

“I designed and sell the twist on solar light lids, flower frog lids, and hanging lantern lids, so that customers can use their own jars for decoration. I smile when I think of others using their jars that previously were sitting on the shelf or in storage, and now enjoying them in their garden.

“I have recycled and upcycled most of my life, even before I heard the term ‘upcycling.’ In the country, people throw things on the ‘junk wagon’ when they are cleaning out old sheds or farms. I am the one pulling it back off and storing it until I can find a use for it, whether it be giving it to someone who can use it, adding it to my garden as garden art, or turning it into another creation to sell.

Pro tip: Where to find jars

Many jars are out there in people’s basements, garages, storage, thrift shops, or recycling bin. If you ask around, you will often find people have unused jars. I even save the broken jars and use the glass as decoration.

There has been a gradual decline in the number of people worldwide who do not have access to clean cooking, with the needle moving from over 3 billion in 2010 to 2.6 billion in 2019. The overall picture is still pretty grim, however. Particularly so in Sub-Saharan Africa (SSA), where only 17 percent of the population have access to clean cooking fuels (IEA, 2019). Not only that, the number of...