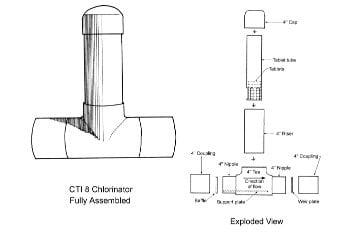 The chlorinator, shown here fully assembled and broken down, attaches to a loop in the water pipe that feeds into the community tank. Image courtesy of CTI

Officials in the Matagalpa health ministry in Nicaragua convened late last year to announce that infant deaths to gastrointestinal disease had dropped to zero, down from six in 2010. The news coincides with a surging public water chlorination program. In the agrarian villages in the region’s temperate mountains, community leaders have installed handmade chlorinators in the town water supply. Working with international volunteers and non-profits, dozens of villages have formed water committees to build, install and maintain the devices.

Since the pilot program began in 23 villages in 2001, the communities report decreases in diarrhea, intestinal parasites and other waterborne disease. Jorge Fernandez is the Nicaragua program director at the US-based Compatible Technology International, which designed and helps install the chlorinators. He attributes the public health gains in Matagalpa to a constellation of programs including hygiene education, sewage treatment, government support and distribution of free chlorine to communities.

“Water chlorination is however, globally recognized as one of the most important advances to public health, having been proven to have an enormous impact for over a century,” Fernandez told E4C in an email.

The chlorination program appears to have staying power, as communities maintain their chlorinators for years after the technicians leave. It is scalable, aiming to reach 100,000 people by the end of this year, and the model could have international potential. 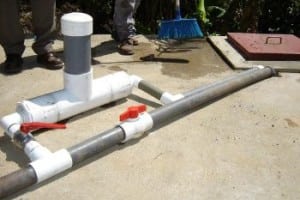 The chlorinator is the T-shaped device, shown here attached to the loop built onto the main water pipe. Photo by Jenni Amundson / CTI

Building the chlorinator, a how-to guide

CTI developed the devices as a low-cost, simple and rugged solution for gravity-fed water supplies with enclosed community cisterns. The chlorinator, called a CTI 8, has few moving parts and is made mostly from PVC pipe and materials found in Nicaragua.

On a gravity-fed pipe, the device diverts water through a short loop into a chlorine tablet placed directly in the flow. The tablet is loaded through the top of a T-joint and drops into a kind of basket in the water pipe. A ball valve guards the joint at the head of the diversion loop. To control the dosage of chlorine in the community tank, an operator opens or closes the valve to allow more or less water to flow into the loop and over the tablet. Following a manual, people can usually build it in three hours or less using simple hand tools. 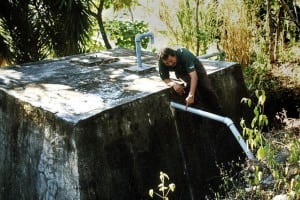 Technicians decide where the best placement for the chlorinator, preferably near the entry into the community water tank shown here. Photo by Fred Jacob / CTI

How a village pays for water treatment

A single CTI 8 can treat 2-20 gallons of water per minute (0.13-1.3 liters per second). One is usually sufficient for a community of up to 500 people. The device costs about $100 in materials, and including the installation, that breaks to about $.50-.80 for each family. Chlorine tablets cost about $2.50 each, sold in Nicaragua’s capital Managua, and they last about 2-4 weeks at average flow rates.

“Cost and the ability to find local materials are our main drivers,” says Greg McGrath, co-foundering of Emerging Opportunities for Sustainability International, a non-profit appropriate technology organization that promotes CTI’s chlorinator in Nicaragua. “We’ve taken existing tech, and with some design work and taking advantage of whatever supply chain advantages we can find, we provide it at the lowest cost in the country,” McGrath says.

Low costs are especially important in Nicaragua, one of the most impoverished countries in the Western hemisphere where as many as half of the people may live on less than $2 per day.

The chlorination program has longevity, probably because it is more than a simple delivery of a technology. CTI has 25 years of experience building and sharing sustainable technologies in developing countries, and it has avoided the fate of the few notorious water programs that have become case studies in what not to do. Usually, the story goes that well-meaning volunteers install pumps or deliver some other technology, but they overlook the difficulty of maintenance and repair. They leave behind broken pumps and devices that fall apart and gather dust. 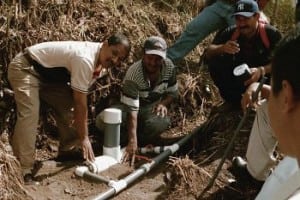 Most of the communities in Matagalpa and the neighboring department of Jinotega have continued to maintain their chlorinators on their own after installation, some for more than three years. The key is the water committees and lots of support.

CTI works with Nicaraguan government officials in the Water Ministry and their partners at EOS International to train communities in the installation and maintenance of the chlorinators. Each community appoints a water committee that buys and replaces the tablets as needed and checks chlorine levels in the public cistern. The committees maintain a blog (in Spanish) here.

With this model, CTI and EOS International plan to help install chlorinators that serve 300,000 people by June 2014. They are on track, McGrath says. In six months in 2011, they helped provide chlorinated water for 20,000 people, and by the end of this year, they plan to reach 100,000 people.

Cooperating with local governments and community leaders, selling the technology to the people who will use it, and showing people how to build and maintain it are all tactics that have contributed to this program’s success. They also have the potential to take this program beyond Nicaragua’s borders. If that sounds appealing, consider contacting CTI – its always looking for partners.

Clean-tech awareness brought to you by…

Coca-Cola set the bar for marketing and distribution in the world’s most impoverished and hard-to-reach communities. “You can walk into a village and they won’t have electricity, they won’t have medicine, but they’ll have Coke,” Heather Fleming, co-founder of Catapult Design said. “You can either try to work with Coke to distribute new technologies or find these great individuals,” she said. One of the great individuals Fleming has in mind is...