My research on the built environment suggests that the interior design of homeless shelters can either support or hinder people’s ability to assert control over their future.

Some 544,000 people in the United States have no shelter every night, according to the U.S. Department of Housing and Urban Development. Homeless families make up over one-third of this total.

Beyond exposing them to weather, crime and unsanitary conditions, homelessness can also damage people’s self-esteem, making them feel helpless or hopeless. Being homeless is a traumatic experience, in part because of the stigma associated with this situation.

Recovering from homelessness may therefore involve not just finding a job and permanent home but also rebuilding one’s self-esteem.

My research on the built environment suggests that the interior design of homeless shelters can either support or hinder people’s ability to assert control over their future.

Homeless shelters, too, can influence how residents see the world and themselves. A shelter with sterile corridor and glaring lights may silently send the message that, “People don’t think you deserve a nice place to live.”

Homeless housing designed with warm colors, thoughtful lighting and useful signage, on the other hand, can send the opposite message: “Someone cares.”

In my experience, most homeless shelters are designed simply to house as many people as possible. Others are so dilapidated, violent or dirty that people actually prefer to sleep outside.

I undertook a three-month field experiment at a shelter in Florida to understand how bedroom design could support or hinder two families trying to transition from homelessness into permanent housing.

Each family consisted of a single mother with two children. One family had two girls, ages 3 and 4. The other had two boys, ages 3 and 18.

Both parents had generally positive relationships with their children, had completed high school through the 10th grade and were living in the shelter because they had lost their jobs.

Initially, both families stayed in identical 9-by-12 bedrooms. Each had two metal bunk beds, one dresser, pale green walls, a single light fixture and a bathroom shared with a family of four. With so little storage, the families piled their belongings on the unused fourth bunk.

The bedroom door had no lock, so that staff could check in on residents as needed. This is common in shelters.

After two months, one family moved into a room that our team had upgraded with 18 new features intended to empower residents by offering them control over their environment.

These included drawer-and-bin storage for their possessions, lap desks, privacy curtains around the beds, bulletin boards and shelving. We also painted the walls a light blue. 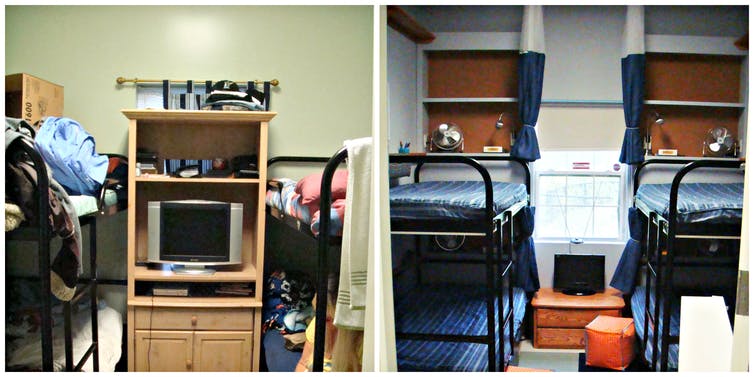 I interviewed the mothers in the beginning and the end of their experience.

The mother who would later move into an upgraded room felt “aggravated and frustrated” in the first space. The mother who stayed in that room for all three months described it as “crowded,” “claustrophobic” and “grim.” She even said the metal beds and hard, cold floors reminded her of jail.

Both families piled their belongings on the unused fourth bunk for lack of other storage.

“The more time you spend in it, the more you feel like the walls are closing in,” she told me after four weeks, explaining that she often stayed out late to avoid coming home to this cramped situation.

So did her older son, who sometimes spent all night in the shelter’s computer lab. His mother worried about her son’s “vampire” hours.

This family seemed agitated throughout the three-month study. They sought relief from their housing situation – and from each other – elsewhere.

The family’s experience in the altered room

Things looked different for the other family.

The good lighting and wall cushions encouraged them to read together. They had guests more often. A case worker told me that the family would sometimes spend the entire day together in their shelter bedroom – something they’d never done in their previous space.

Though the two rooms were the same size, a divided dutch door and bed curtains allowed the residents in the altered room to create personal spaces for listening to music or reading.

They organized and put away their possessions in the storage provided, reducing clutter.

The children liked drawing on the marker boards, so the mother allowed them to use it as a reward for good behavior, exerting parental authority in a positive way.

Tellingly, the families also expressed themselves differently in the two rooms. In the upgraded room with shelving, the family displayed photographs, art and beloved stuffed animals. The kids played dress up in front of the mirror. These are both territorial acts that define and confirm identities.

The family in the unaltered bedroom displayed little art, in part because the mother felt it was an imposition to ask shelter staff for tape to affix items to the wall.

When her 3-year-old boy tried to play cars on the floor, his mom told him it was too dirty. Bored, he would peel paint off the wall near his bed.

She reprimanded him for this behavior, causing arguments. The children also argued frequently with each other.

A place to call home

At the study’s end, I asked the mother living in the upgraded space how she would have felt if her family had stayed in the unaltered bedroom. Her answer reflected the role housing plays in keeping a family happy and healthy.

“I don’t know if I would say I would be depressed, but I would have had a different feeling,” she responded. “Sometimes you just want peace and quiet” – which the bed curtains and dutch door now offered her.

She also thought her kids might have eventually “cracked,” she said, because they couldn’t act as they would in “a regular home.”

“My older girl will pull the curtains and read books to her sister” now, the mother said. “She feels like she has something that belongs to her.”

The new bedroom, which could be adjusted to fit the family’s needs, empowered them to take ownership of it. I believe such actions may help combat underlying feelings of helplessness.

This small, only partially controlled study is not the final word in shelter design.

But it certainly suggests that shelter architecture can help families experiencing homelessness by giving them a calm, positive and supportive home base for planning their future.

Jill Pable is Professor of Interior Design and Architecture at Florida State University.

Are 3D-Printed Prostheses the Solution for Limb Loss in Low-Income Countries?

Maybe, but gaps remain. 3D printing is disrupting industries around the world largely because of the availability of low-cost 3D-printing machines, ease of use, and high-yield products in low amounts of time. The field of prostheses is one of the disrupted industries. Prosthetic limbs are highly customizable products that can vary substantially from person to person and have been traditionally expensive to manufacture. Both of these factors make 3D printing...