We polled our community of experts for this list of 14 of the year’s interesting prototypes. Advisers to our Solutions Library, E4C staff and contributing editors weighed in. To be clear, these are not product endorsements. Rather, the devices here represent the research that has caught our interest. This is a snapshot of the technologies that are undergoing testing and redesign on the path toward a public launch. These are our picks. 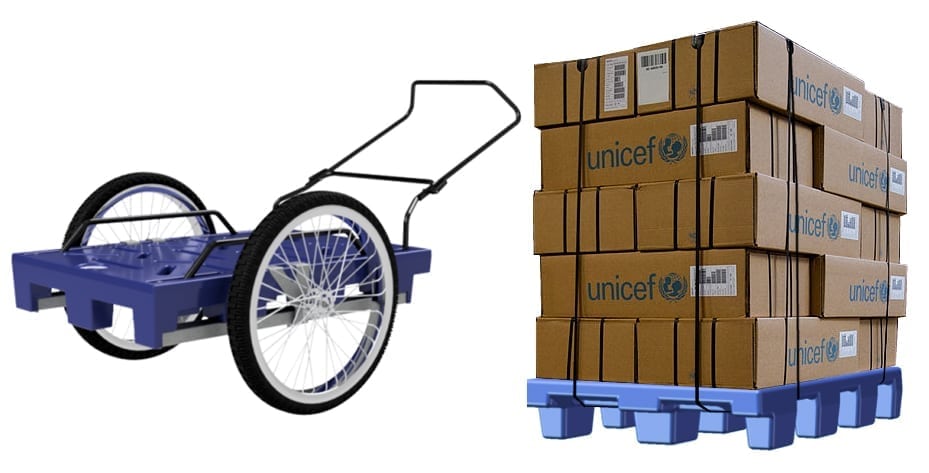 It’s a shipping pallet that can double as a water container. The AguaPallet holds up to 70 liters (18.5 gallons) of water that it can pour with a spigot. It also converts into a two-wheeled cart. Its space-saving design might prove to be easily shipped to disaster-stricken communities. The invention’s creators at LoooP Creative won the UNICEF and Socialab First 72 Hours Challenge. 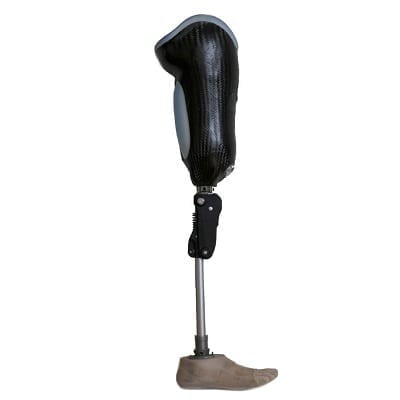 The AT-Knee (All Terrain Knee) helps recent amputees learn to walk with a prosthetic knee joint. The knee eases the transition from early rehabilation through movement options. It can lock in place for use as a manual joint, or it can allow for a more natural gait as a mechanical joint as its owner improves with practice. 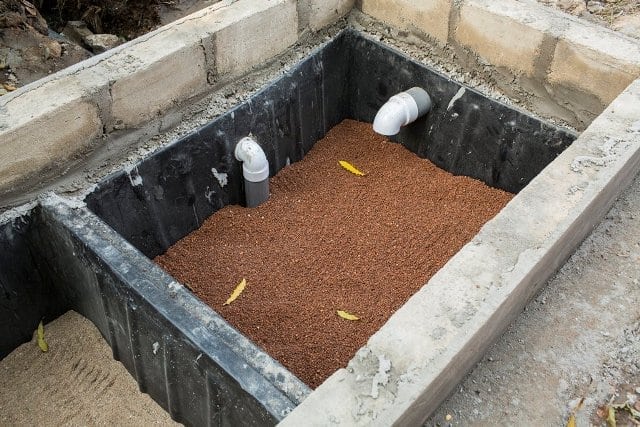 The Biofil Digester treats toilet waste on site. It filters the liquid through sand and porous concrete, allowing non-toxic water to stream out. The remaining solid waste decomposes in an aerobic chamber that supresses the production of methane during the process. The resulting compost is non-toxic and suitable for use as a fertilizer.

After review using the Technology Applicability Framework (TAF), participants concluded Biofil Toilet Technology has a huge potential of contributing immensely to improving the coverage of sanitation in Ghana and at this stage satisfies (or at least has a high potential to overcome its shortfalls) most of the sustainability indicators,” says Susan Davis, the founder and head of Improve International and a contributing editor at E4C. 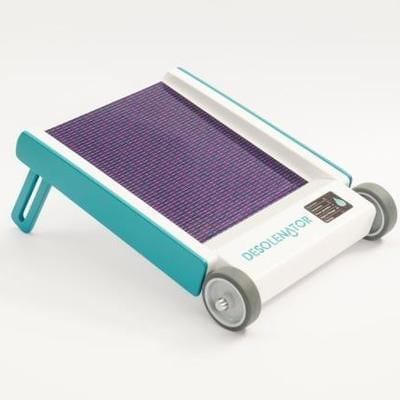 The Desolenator is a solar-powered water purifier that makes salty or contaminated water drinkable. After a successful Indiegogo fundraising campaign, the Desolenator team picked up an award from the Danish government this year and plans to start shipping its product in March of 2016.

As a caveat, one of our reviewers called the device “seriously expensive,” and pointed out that there is no documentation on the amount of water that it produces. Early Desolenator models sold for $450-479 on Indiegogo and donors had the option to spend $650 to buy a machine for a family in South India or Africa. The Desolenator team addresses the cost complaint on its fundraising page:

“The system lasts for up to 20 years, has no consumables, no filters, needs no energy and only requires basic maintenance.” The team says it is looking at micro-finance and shared ownership plans to defray costs, and the first systems will include remote monitors and the ability to charge the users per use, not per device. 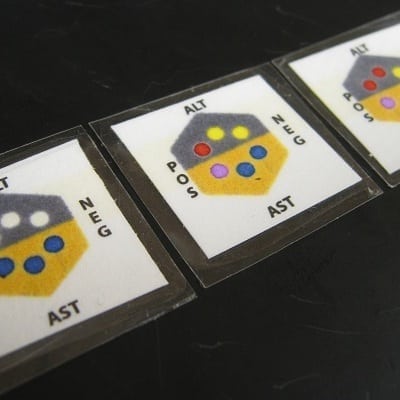 Diagnostics for All (DFA) produces low-cost, effective, paper-based diagnostic testing for liver enzymes. A fingerprick of blood and 15 minutes will give healthcare providers an assessment of the patient’s liver health. These tests can improve the treatment of HIV- and tuberculosis-infected patients. 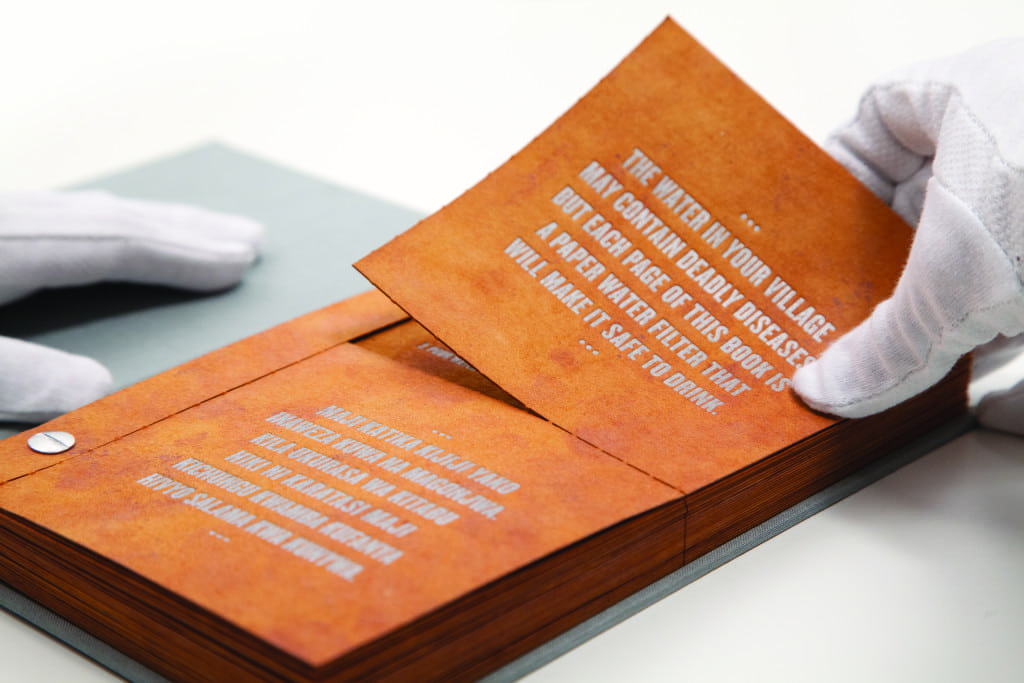 Part of the struggle to treat drinking water in marginalized communities is convincing people that they need to do it in the first place. Now a new prototype for a water sterilizer combines the message with the method. The Drinkable Book, in development by WATERisLIFE, treats water with each of its pages. The pages release silver nanoparticles that disinfect the water. And the pages themselves could explain how to treat water and why it’s important.

The WATERisLIFE team envisions the book as a tool for students.

“It’s a way to fully engage with students because it’s a book,” the organization’s president, Kristine Bender, told E4C. “It not only educates, but it’s life-saving. We’re providing health, sanitation and hygiene education.”

The working concept is that the user will tear out a page and place it in a delivery device of some kind. The device is still in development. Each piece of paper can treat about 100 liters (26.5 gallons) of water, and each book could treat water for one person for four years. 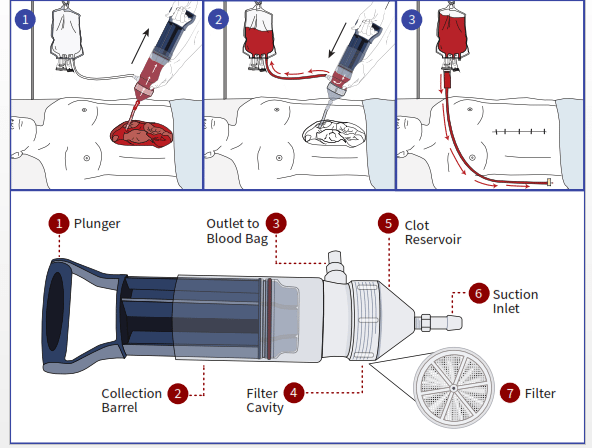 The Hemafuse is a handheld manual device that transfuses a patient’s own blood back into the body during surgery. This blood recycling system may someday replace soup ladles and gauze blood filters sometimes used in poorly equipped hospitals in Sub-Saharan Africa. It recycles blood collected from an internal hemorrhage, used in place of or in tandem with donor blood in emergency situations. It works like a large syringe that pulls blood in and filters it.

The device is proceeding to clinical trials.

“They’ve really gone the distance in terms of taking a device intended for international settings through all of the research and regulatory hoops,” says Jordan Schermerhorn, a global health researcher and contributing editor at E4C. 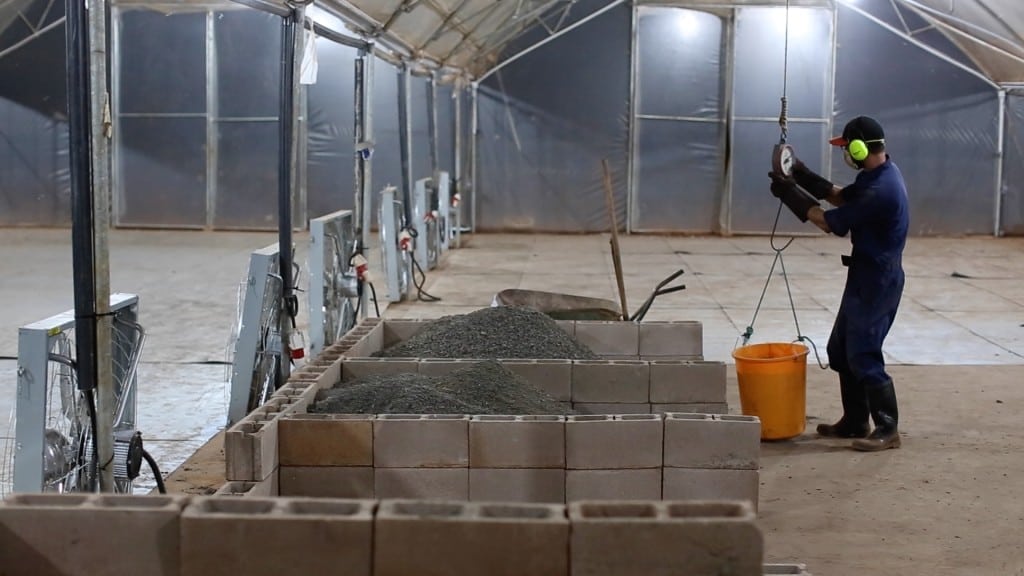 Pivot Works may have found a way to make treating human waste pay for itself. The company dries and processes waste at a central plant, converting it to fuel that can burn. Then they sell the fuel to industrial cement plants to power their kilns.

The fuel is such an important part of the business model that Pivot calls itself an energy company with sanitation as a byproduct. That business model may be superior to the traditional ways of dealing with waste, Susan Davis says.

Pivot Works won funding from the Bill and Melinda Gates Foundation in 2014 and sold its first five tons of fuel in November in Kigali, Rwanda. 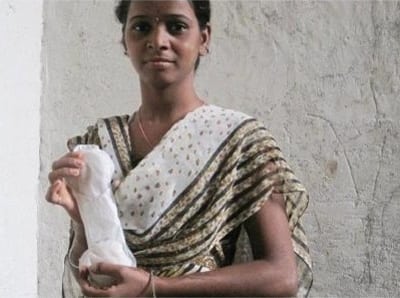 Saathi Pads are biodegradable sanitary pads made from waste banana tree fiber. Saathi, formerly Komera, is developing a tabletop pad manufacturing machine. In the future, the Saathi team hopes to sell the machines to small business owners who can make and sell the pads from their homes. The shorter-term goal, however, is to produce the pads in Saathi’s own plants.

“We want to do decentralized manufacturing centers, not a huge centralized factory. We want rural women in rural areas to be entrepreneurs and run those centers and urban core women to run the urban centers,” Amrita Saigal at Saathi told E4C. 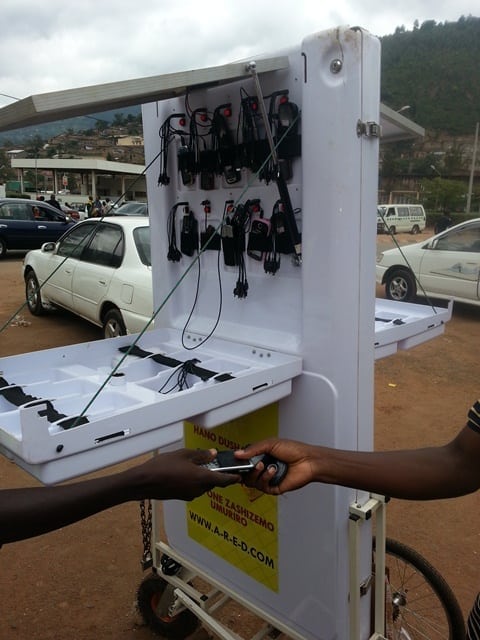 The African Renewable Energy Distributor’s newest generation of mobile solar kiosks will be networked and offer diagnostics over the Internet to monitor the hardware (an M2M system). The systems will also have GPS for tracking as they are hauled by bicycle around Kigali, Rwanda and possibly abroad, the company says. The kiosks can charge 100 phones with its two 40-watt panels, says ARED’s founder and director Henry Nyakarundi.

The kiosks are meant to improve energy access in Rwanda and also to provide jobs. For their business model and technical innovation, ARED’s mobile kiosks won a spot among this year’s finalists in iShow Kenya. 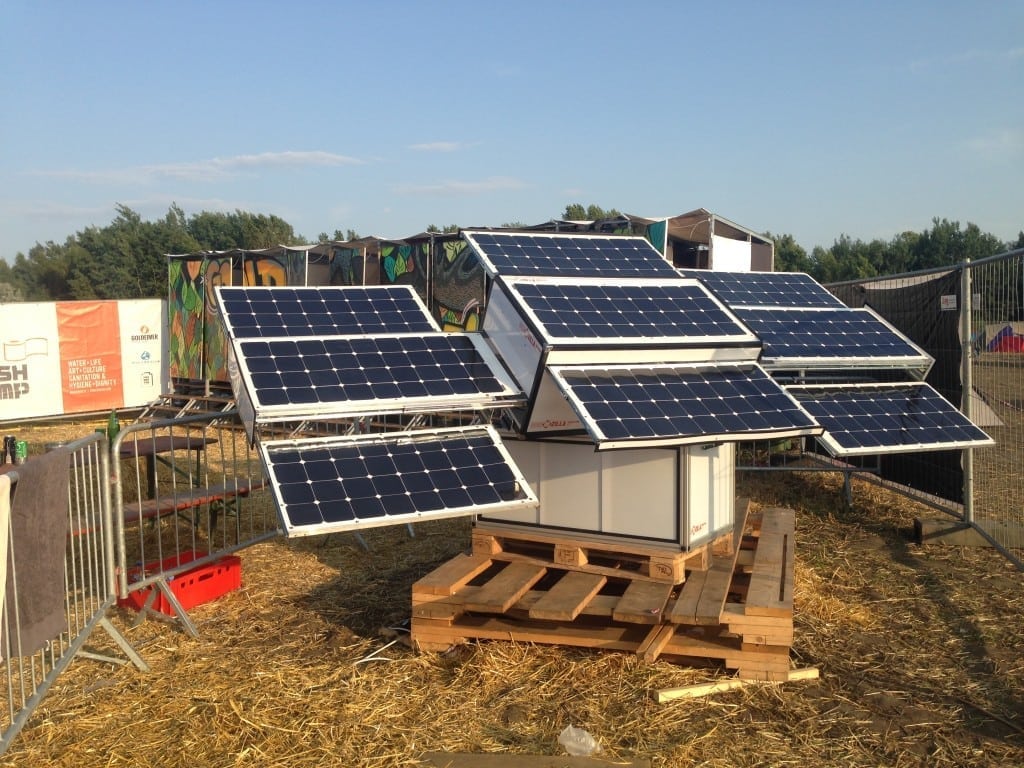 Sunzilla travels as a box that fits on a standard shipping pallet. When it’s time to go to work, the unit open its solar panels like a flower toward the sun. The design is open source and the company’s website includes an instruction manual for building one at home. Besides the pretty concept, one of the unit’s other attractions is its flexibility. Builders can add panels as needed, and users should be able to plug and play. 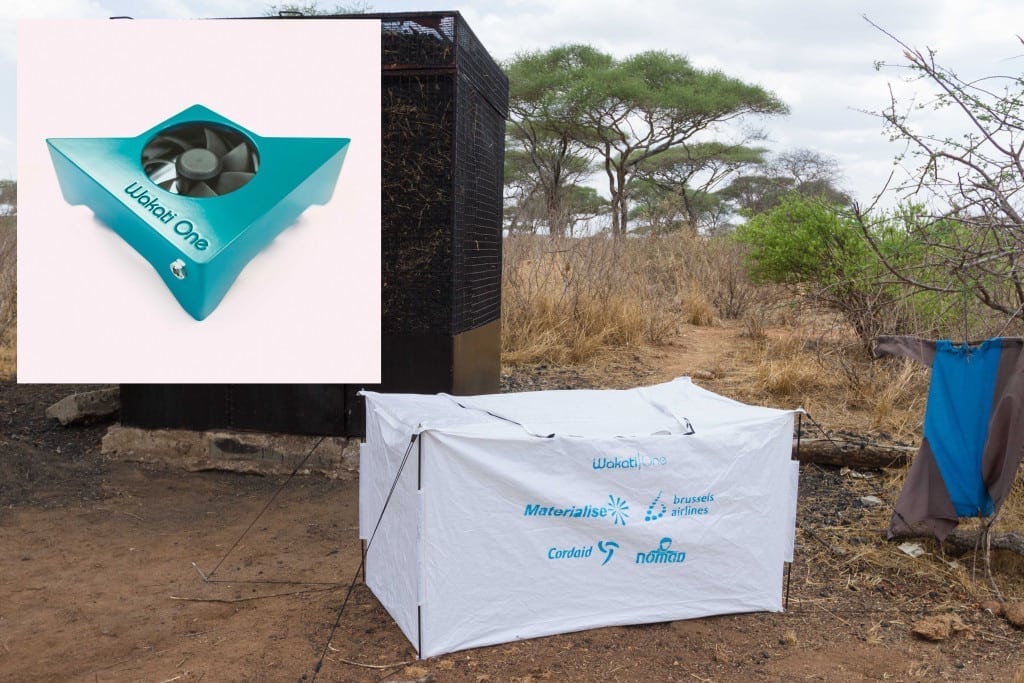 Most of the food wasted in developing countries occurs post-harvest, at about 40 percent of the production.

With that in mind, Arne Pauwels created the Wakati One, a stand-alone produce and fruit preservation system. The system looks like a small tent with a fan attached. The fan and a water reservoir humidify and disinfect the climate inside the covering. Early testing found that fruit inside the tent lasts eight times longer than fruit left outside. 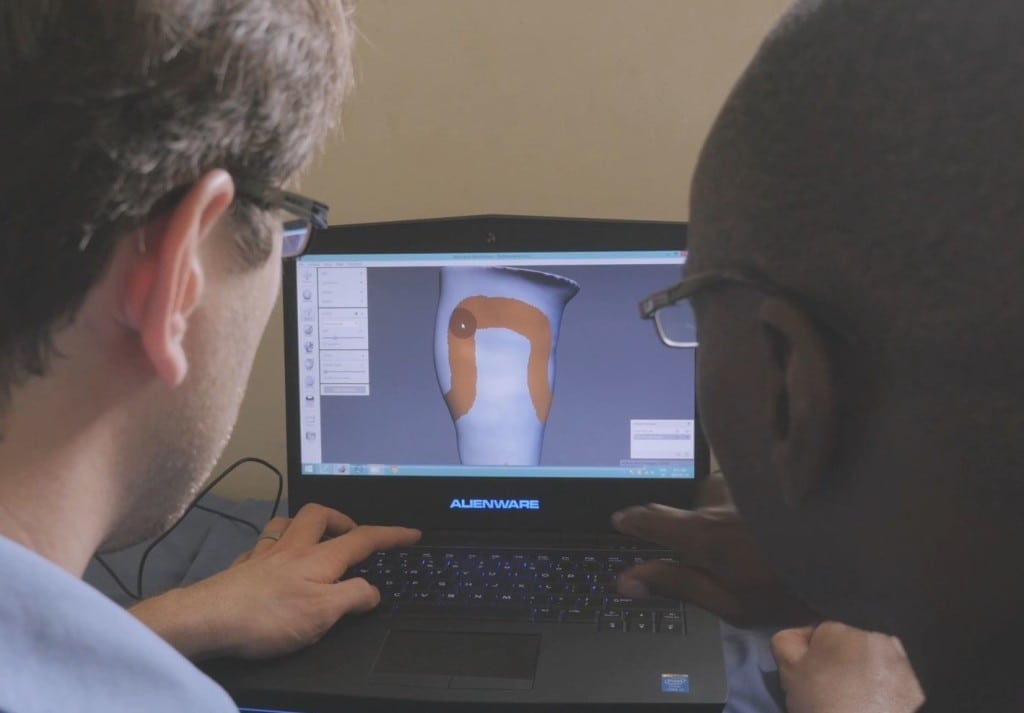 Making a prosthetic limb the traditional way takes about a week. First, the prosthetist takes a plaster mold of the end of the damaged limb. Then the prosthetic needs to be built and sized manually. That’s a lot of labor to meet the needs of the world’s more than 10 million people with amputations or congenital limb damage. The problem is compounded in developing countries, where most of the amputees reside, because prosthetists are in short supply.

The Canadian start-up Nia Technologies may have a solution in 3D printers. Instead of casting the damaged limb with plaster, a technician scans it digitally. That allows for digital modelling of the prosthesis, which is later transmitted to a 3D printer for construction. The method could be as much as 80 percent faster, Nia’s technicians say. They call the process 3D PrintAbility. 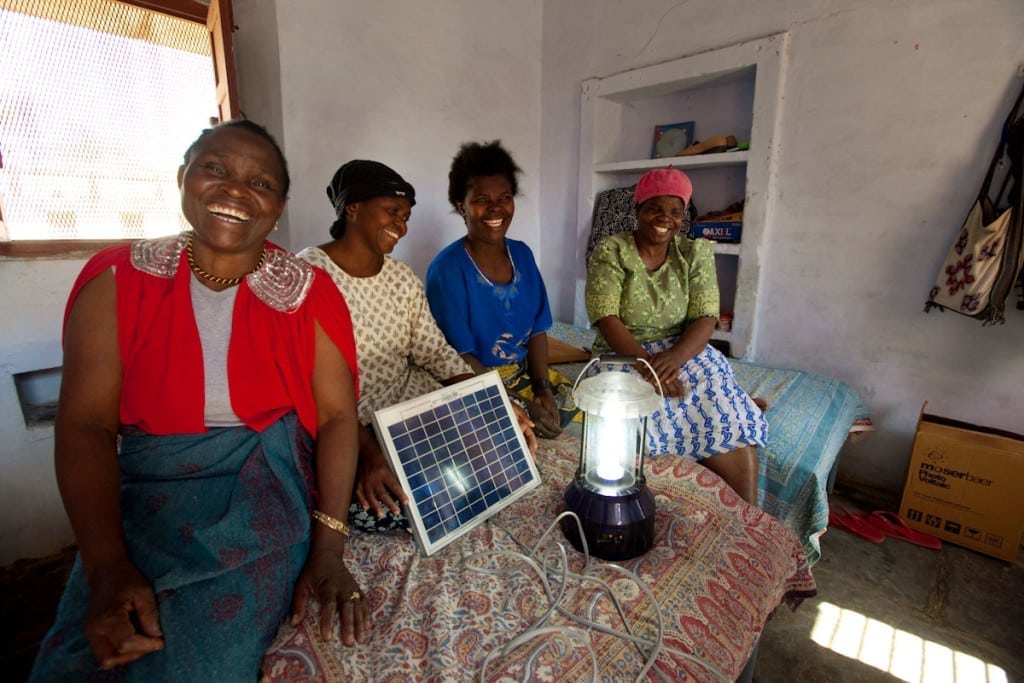 Participants from Liberia and Malawi at the end of their six-month solar engineering course sit around one of the solar lanterns that each will take home. Photo by UN Women / Gaganjit Singh / Flickr

Prototypes get all the attention in discussions about technology for global development, Diana Jue says. Jue is one of the heads of Essmart, an organization that distributes appropriate technologies in India (and she’s a contributing editor at E4C). Looking at all of the year-end product roundups, including this one, we see that the struggle is real. To ease Essmart’s hardship, we’d like to conclude our list of prototypes with a process, not a product. Essmart is testing gender sensitization training among the business owners who sell the products that they market.

“We received a grant from the UN Global Alliance for Clean Cookstoves Women’s Empowerment Fund (long name) to run “empowered entrepreneur” + gender sensitization training sessions. The goal is to train male shop keepers on the pluses of utilizing their female employees more so that they can be better salespeople for women-centric products like cookstoves. Then we’ll be training the female employees with similar material,” Jue says.

The Catastrophic Intersectionality of WASH, Climate Change and the Coronavirus

A COVID-19 Ventilator for Everyone

Design for Individual or Community Ownership?

Greenhouses, like this low-cost modular design from the Affordable Greenhouse Venture team at Penn State, represent both the benefits and challenges in community-owned property. Photo courtesy of Arianna De Reus / Affordable Greenhouse Venture Welcome to The Big Design Questions, a weekly series that tests and challenges design principles that we promote for creating techologies that meet basic needs in uderserved regions. Khanjan Mehta, a contributing editor at E4C and head of...

Join the Siemens Design Challenge for a chance to win one of two $10,000 first-place awards. Bob Rabatsky has tapped into his lifelong experience...