Sputtering diesel pumps are a common sight on Indian farms. The market is awash in low-cost and reliable 5hp Chinese models. But diesel prices have been rising, and so have carbon dioxide emissions. To lower costs and clean up farming practices, Greenpeace has challenged inventors worldwide to reimagine the irrigation pump. The eight-week Energy [R]evolution challenge is in full tilt now with the deadline approaching Nov. 15. More than 70 entries and inventors vie for a E30,000 prize package to develop their idea.

Rather than bottling up the designs in a private submission scheme like many contests, Greenpeace’s format is open. With criticism and guidance from the crowd, the result may be a better collection of designs when the deadline hits. We encourage the E4C community to offer your expertise, too.

The rules are to design a pump that could operate in the rural Bihar region of India. Pumps should be portable, low-cost, capable of drawing water from a 5-meter well and match the 5hp diesel pump in capacity and ease of use.

Pro tips: What matters to the farmers

We asked Ben Jaques, the Agriculture Program Manager at MIT’s Abdul Latif Jameel Poverty Action Lab, for his advice to pump inventors. Think about it from the point of view of the farmers, he says. Lower expenses matter, but air quality doesn’t because it’s hard to internalize that type of cost. And there’s a hidden cost in making a switch to a new machine. It’s an unknown risk. There’s also a learning curve in using it, which could increase the farmer’s labor at least in the short term. “Sometimes we forget that farmers value their free time,” Jaques says.

You absolutely need this step [of a good design], but there’s the next step. Just having a great technology doesn’t mean that people use it

There’s also the cost of disposing of the diesel pump. Part of the replacement might include packing off the old equipment, Jaques suggests. Or a smart design might be a retrofit for a diesel pump.

Looming, as always, in the background is the question of how to scale up the new design and distribute it to rural India.

“Bridging the last mile is complicated even when you have what looks on the surface to be a great technology,” Jaques says. You absolutely need this step [of a good design], but there’s the next step. Just having a great technology doesn’t mean that people use it. And that’s a crucial point.”

Greenpeace plans to support the winning design in its evolution from a sketch on a napkin to a product on store shelves.

“We will organize prototyping and in-field beta testing, so the feedback of real Bihar farmers can be taken into account and the designs improved upon yet again,” Ingo Boltz, Greenpeace Global Innovation Manager, told E4C.

“The outcome should be a rock-solid, reality proof product, that can actually start to compete with diesel pumps. We will also help kickstart market entry by training young Bihar entrepreneurs how to use, maintain, service, and sell the pumps, and encourage them to start micro-businesses around them in their local villages,” Boltz says.

These are 15 pump designs to whet your appetite for more. 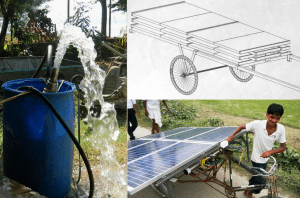 Solar pump for Bihar
A do-it-yourself design with off-the-shelf parts could make this a low-cost and attractive pump for farmers with the inclination or for entrepreneurs to build and sell. This model features a 1hp submersible AC pump, 12 100W PV panels, a controller and a cart to move it. The panels are not tied to the pump, they could also charge lights, appliances, other devices or the owner could sell battery charges as a side businesses. 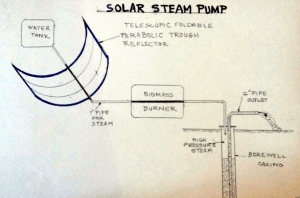 Solar steam pump
With nearly no moving parts this concept pushes water out of the well using steam. We say “nearly” because it employs a hand-operated pump to fill a water tank that starts the process. Parabolic reflectors boil the water in the tank, the steam enters the well and pushes the water downward and out through the pipe outlet pictured. A biomass burner supplements the reflectors. 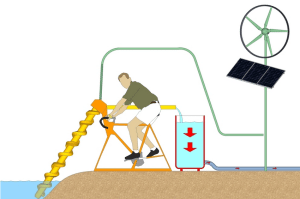 Archimedes screw
An Archimedes screw is a centuries-old pump design that draws water up the screw’s wide threads to a bin. This concept has three power options: a bicycle, solar panels and a windmill. 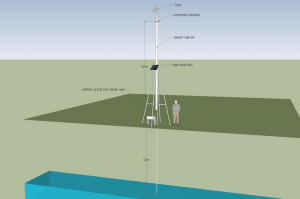 Bihar tube
The designer is keeping the details of this “Atmospheric Pressure Pump” secret, but the claim is that it can lift water a height equal to that of the tube above ground. The designer promises to post a video of a test pump in action. 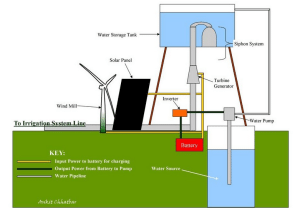 The modified power of Reuse
This system uses solar and wind power to lift water to a tank that is higher than ground level, then when the water drops down for irrigation some its energy charges a battery. An alternative proposed by a commenter suggests that the elevated tank could store energy for use when the power generators cannot perform well, such as cloudy or windless days. 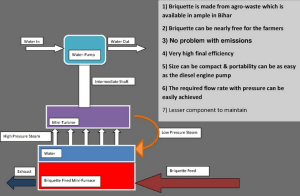 Briquette [agricultural-waste-powered pump]
Agricultural waste as a power source makes sense on a farm, and it also makes surprisingly few appearances in this collection of pump concepts. This straightforward design burns fuel briquettes made from waste from the fields. The heat produced boils water which turns a steam turbine to power a pump. 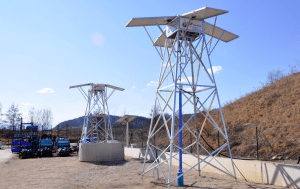 New Solar Pump
Billed as maintenance free and independently powered, the New Solar Pump lifts water with a pump piston system or a proposed rope pump. Either kind of pump would be powered by the panels on top of the structure which can range from 190W to 3200W depending on the size of the model. The smallest system would have a flow rate of 10,000 liters per day from a 20-meter well, the designer says. 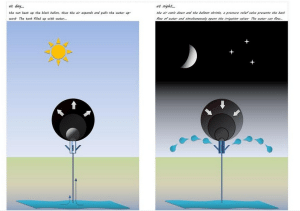 Solar balloon watering
The sun heats a black balloon, expands the air inside and as it lifts it draws the water from the well below. At night it cools and releases water onto the field. 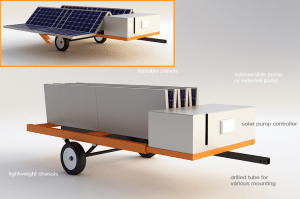 Solar pump
Folding photovoltaic panels power this pump on a cart concept. The idea stems from a similar pump featured in this YouTube video with Thomas Jenkins, an engineering technology professor at New Mexico State University. The designer posted the link to explain how this concept works.

The pump system can store excess water in drums for use on cloudy days or at night. The design in the video is more reliable, costs less and requires less maintenance than windmill pumps that are common on farms and ranches in New Mexico, Jenkins says. 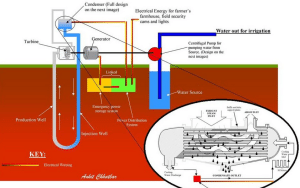 Small-Scale Mini Geothermal
A deep borehole and higher temperatures deep underground drive this “mini-geothermal” pump. If the hole is deep enough, water channeled into it will boil and send steam back up. The steam drives an electricity generator and also a centrifugal pump to provide irrigation and power on the farm. 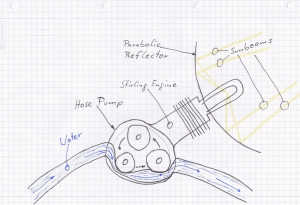 Sonnenpumpe
The minimalist artwork portrays a popular feature among solar-powered machines: A stirling engine. The parabolic reflectors heat the expansion chamber of the engine to power it and it drives a hose pump. 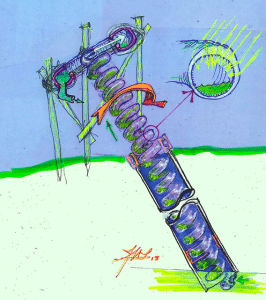 Spiral solar pump
At first glance it’s an Archimedes screw, but this design, like the eccentricity of its artwork, is unique among all of the submissions. The screw is actually a spiraling tube of glass. The outside of the tube is a magnifier and the interior is coated with nano-sized filaments. Magnified sunlight heats the filaments which vaporize water in the tube. The vapor streams out of a strategically placed vent at the top of the tube which turns the whole thing. The tube lifts water along its threads – the same mechanism as a screw, and the steam inside the tube can condense for drinking water or simply more irrigation.

Solar Stirling Common Waterpump
This concept employs a stirling engine heated by a parabolic reflector. The designer points out that the engine can drive a pump but it can also drive electricity generators and other farm machinery.

Humphrey Pump
The century-old Humphrey Pump employs a liquid piston. In this case the liquid is water in the U-shaped trough. The gasifier in the center heats biomass such as agricultural waste until it releases combustible gases. The gases fire in the combustion chamber forcing down the water, which is the piston. The water rises on the other side of the trough and the repeated action drives a pump. 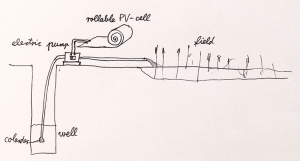 Rollable PV-cell with electric pump
Portable and simple, this basic concept employs thin-film PV panels that roll up for storage.

Promising Prototypes to Watch in 2019

The technologies that improve lives in the world’s underserved communities are born as prototypes that evolve through testing and tinkering in workshops, laboratories and garages. We polled our network of engineering experts in search of the next important products in global development. Each of their recommendations is designed to meet a basic need in the world’s underserved communities. And each has the potential to someday change people’s lives around the...