A low-cost “solar hooter” may keep animal intruders at bay on southern Indian farms. The device flashes a light and emits loud sounds periodically to scare off nighttime invaders.

Monkeys, rats, herons and other animals raid farmers’ fields to eat their crops. Electric fencing keeps them out, but it is prohibitively expensive for many farmers, and live wires have been known to injure people and animals. Without an assist from technology, farmers must patrol their fields at night to protect them.

Student engineers at the Indur Institute of Engineering and Technology in Siddepet in the state of Telangana have developed the hooter as a cost-effective solution. 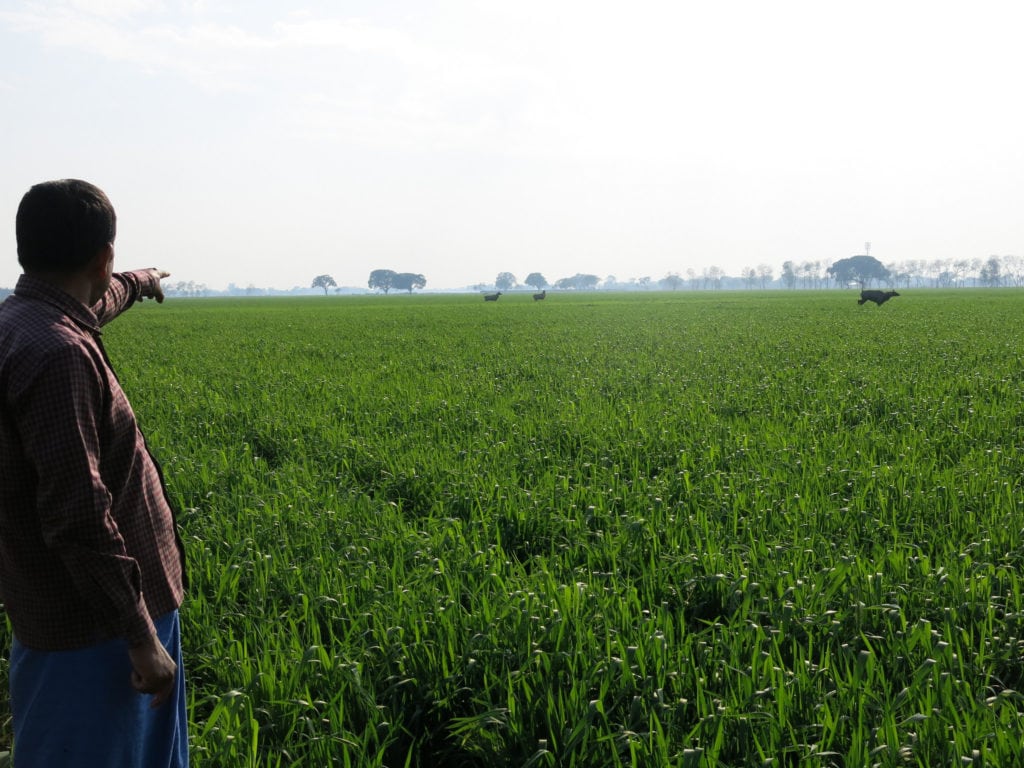 Vipin Kumar, a farmer in Southern India, points at a herd of Nilgai antelope that raid crops. The new “solar hooter” could scare them from the fields. Photo by Anuradha Dhar/CIMMYT/Flickr

The device is composed of a controlling circuit, timer, brushless DC motor, LEDs, hooters, a battery and other components inside a plastic housing, all powered with a solar panel. The raw materials total ₹3000 (about US $50), but the device is not available for retail sale, yet.

“It is a pollution-free device that doesn’t require any power supply from another source. No need for daily inspection. It automatically turns on and turns off. It is economical to farmers and not harmful to any creature,” says Donthuraboina Purnachander, one of the student engineers working on the project.

The hooter has been tested with success in a field of maize, says K. Laxmi Narsimha Rao, assistant professor of electrical and electronics engineering at the institute.

The next step may be to arrange for manufacture, the students say.

A new lightweight and low-cost solar-powered sprayer could put pest control in financial reach of India’s small-holder farmers. The High-Clearance Solar Sprayer is a pesticide sprayer invented by Sangappa Sankanagouda, at the College of Agriculture Engineering, Raichur. The award-winning device has earned grants and financial backing for manufacture. “My ambition is to start an industry so that I can make different types of machines and provide them to the farmers as soon as...