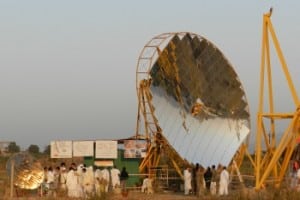 This 60m2 Scheffler dish is a test run for a plant that will link 770 of these. Photo courtesy of Golo Pilz / Solar One

An ambitious experiment in solar thermal energy generation is on track to power a community of 25,000 people in Rajasthan, India, by 2014. Now, the yellow beams of topless solar concentrators stand in files on 25 acres of sun-drenched land. Throughout the year, they will form part of an array of 770 Scheffler dishes, each with a mirror-plated surface of 60 square meters.

On paper, the India One solar thermal plant is a unique mix of proven technologies in solar power generation. It is a project of the World Renewal Spiritual Trust, which itself has a unique blend of programs in cultural stewardship, including yoga, and solar energy research.

The plant may be the only of its kind that incorporates parabolic dishes with steam-powered electricity generation. Each dish directs the sun’s radiation onto its own cast iron receiver. Each receiver contains 3.2 tons of iron with a heat transfer coil embedded within. Solar radiation heats the iron up to 480C, and water is pumped through as needed to turn a central steam turbine.

The receivers are key innovations. Each is shaped like a bullet pointed at the dish and built to reflect the solar radiation from tip to base. They are insulated and at night their doors close to trap the heat inside. That way they keep the steam turbine turning even after dark. 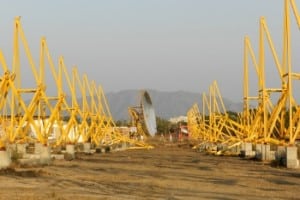 The framework for a future power plant. Photo courtesy of Golo Pilz / Solar One

“It’s an R and D project,” Golo Pilz, an adviser to Solar One, told E4C by email. “As we use a relatively small turbine with relatively low temperature and pressure, its efficiency is only around 20 percent. “The technology can be scaled up, and larger turbines give better efficiency. Also, if you use heat and power, then you get a lot of extra energy through cogeneration and it makes more sense.”

The plant is budgeted at 660 million rupees ($13.5 million). It’s not clear if it will produce power more cheaply than a solar photovoltaic system.

“PV price has dropped amazingly over the last years. It has to be seen if small thermal power plants can compete,” Pilz says.

The US Energy Information Administration puts a higher price on solar thermal power, but the Indian plant is probably unlike any US plant included in the study.

An advantage that Solar One has over PV is that all of its materials are produced locally. Also, the entire array fits in a relatively compact space, and it is modular – to add more power, you make more dishes and receivers. 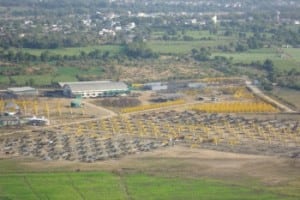 The solar field seen from afar. Photo courtesy of Golo Pilz / Solar One

A solar systems expert double-checked the numbers in the outline of the plant’s expected performance (pdf), and it passed a cursory first look. We asked Brad Rogers, a professor of mechanical engineering at Arizona State University’s Polytechnic campus, and a specialist in the design of alternative energy conversion systems, for a rough evaluation.

“Doing a quick sanity check, I do see from the first page that the power plant is stated to operate at 1 MWe from a 3.5 MWt input. This gives a thermal efficiency of about 29%, which is reasonable for a solar thermal plant with concentration of greater than 60:1. Over a 24-hour period this efficiency will likely be smaller due to losses associated with storage.”

The array should capture about 150MWh of thermal energy each day, as reported. “The total array area is 46,200 square meters (770 dishes of 60 square meters each) with the result that each square meter of array area captures about 3.25 kW-hrs per day of energy, which is realistic,” Rogers says.

Pilz expects to begin testing the plant by 2013, and his team should have data on its operation to report by 2014. We’ll have an eye on this interesting achievement, and Pilz has promised to keep us updated.

World Renewal Spiritual Trust is a non-profit organization that accepts donations for its solar research and Solar One. The project is also looking for a few good engineers. See their Web site for details.

The End of Global Development as We Know It

Development professionals do their work under the assumption that the developing world will some day look a lot like the developed world. But there’s a good chance that they’re wrong. A practical look at the world’s energy supply, and interesting new research into the link between energy, culture and quality of life, shows that the reverse is probably true: The developed world will soon look more like the developing world....