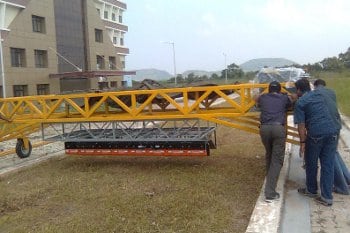 The acoustic mine detector in a test-run over a bed of various soil types. Photo courtesy of K.R. Rajesh.

This innovation is one of our Promising Prototypes of IEEE’s Global Humanitarian Technology Conference in Seattle Oct. 30 – Nov 1. For more in the series, please see below.

Landmines can stay active up to 50 years after they are deployed, killing and maiming children and adults indiscriminately. Today there could be more than 110 million mines, and many more millions of unexploded bombs, shells and grenades, hidden in 68 countries around the world, UNICEF reports. Afghanistan, Angola and Cambodia are the most mine-ridden, accounting for 85% of the world’s mine casualties.

Worldwide, about mines kill or maim about 26,000 people every year, the UN says.

Faster, safer mine detection can clear mine fields more easily and free up land for development. A team at the Indian government’s Centre for Development of Advanced Computing hit on an interesting idea: an acoustic landmine detector. Soundwaves bouncing off of underground objects can reveal mines, even plastic ones, and differentiate them from similar-sized rocks or other rubble.

The researchers are testing an acousto-ultrasonic device that attaches to the front of armored vehicles. The detector is a 128-sensor array that, in tests, has scanned 7.5 square feet per second. It appears to work in at least four types of soils—mud, clay, silt and sand. Photos attached: courtesy of K.R. Rajesh

The Big Design Questions | Should we make products that are localized or standardized?

Welcome to The Big Design Questions, a weekly series that tests and challenges design principles for creating appropriate technology outlined in our Introduction to Engineering for Global Development. Khanjan Mehta, a contributing editor at E4C and head of the Humanitarian Engineering and Social Entrepreneurship (HESE) program at Penn State, and his students first posed this week’s question in a paper published in the IEEE Technology and Society Magazine. Khanjan offers his thoughts below and we’d...