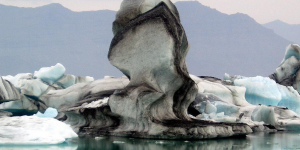 If you’ve seen sooty snow banks on the side of the road, you may have an idea of the damage black carbon can inflict on ice in the Arctic. The particles of oil that escape combustion in ship engines act as greenhouse gases while suspended in the air, and when they settle onto Arctic ice, they blacken its surface and speed the absorption of sunlight. The result is rising temperatures and faster ice melt.

Reducing black carbon in the Arctic may be easy, however, according to a panel of experts convened by the Clean Arctic Alliance at a side-event to the United Nations climate change conference in Egypt. It will require bans of certain shipping fuels, some of which have already been enacted.

Four takeaways emerged from the presentations: Arctic ice is melting fast; the shipping industry exacerbates the melt with high emissions; one of those emissions is black carbon, or soot; and soot can be reduced with a switch in fuel.

Summarizing their insights and data, the panel’s case is this. The Arctic is warming four times faster than the global average and sea ice is melting at a rate of 13 percent per decade. The volume of Arctic ice has declined by 73 percent from 1979 to 2016.

Taking advantage of the newly opened ice-free routes, ships have entered the Arctic in larger numbers than ever before. There has been a 75 percent increase in the distance sailed by vessels in the Arctic from 2013 to 2019, and 25 percent more unique ships, according to a study by Protection of the Arctic Marine Environment. The ships are contributing to the ice melt.

“Ships run on what’s called bunker fuel. You can walk on bunker fuel, let’s put it that way. It’s not like the gas that you fill your car with. Bunker fuel is a heavy, dense material that is much more environmentally damaging when it’s run through the engines of these ships,” Dr. Robbie Mallett, a climate scientist at University College London, said in a presentation.

Burning bunker fuel is greenhouse-gas intense, but it also emits aerosols, some of which are black carbon, or soot. “When that sits on the ice surface, on the sea ice but more alarmingly the terrestrial snow and land ice, that makes it much more absorbent to solar radiation,” Dr. Mallett says.

The panelists called for new regulation of shipping fuels. The easiest solution is to ban heavy fuel oil, or bunker fuel, says Madeleine Rose at the Pacific Environment, a member of the Clean Arctic Alliance.

Norway and Iceland already have bans against heavy fuel oil. Ms. Rose and her colleagues are calling for similar bans in Greenland, Canada, and the United States.

In order of difficulty, the second solution proposed is a zero emissions standard for ships. It could be modeled after the aspirational goal announced by the International Civil Aviation Organization in October, Ms. Rose says.

Pacific Environment is directing its calls to action at California, the European Union, China, South Korea and Japan.

“If just those five regional jurisdictions were to act in unison, they could effectively force the global shipping fleet off of fossil fuels,” Ms. Rose says.

The cost of change

The cost to the shipping industry is one factor that was left out of the discussion. Comparing costs may not be straightforward, however. The cheapest unprocessed bunker fuel is now restricted by the International Maritime Organization, which, in 2020, passed a regulation requiring low-sulfur fuels of .5 percent sulfur content or less. Unprocessed high sulfur bunker fuel of 3.5 percent sulfur content was cheaper at the time, and some ships installed scrubbers to clean up their emissions and comply with IMO regulations. Then the prices of the two fuels converged, more or less, to the frustration of those who had invested in scrubbers.

The difference in price between bunker fuel and cleaner distillate fuel has been greater, but also fluctuates. The price per ton may not be an accurate assessment of the cost of using oil, however. The environmental organization Heavy Fuel Oil Free Arctic argues that the cost of cleaning up oil spills should be considered as well. In two examples they gave with citations, the cost of cleaning bunker fuel spills ranged from (USD) $100 million to €3 billion.

Who needs it most

Two panelists represented an unexpected alliance of communities in the Arctic and in the tropics. Their weather is different, but Lisa Koperqualuk at the Inuit Circumpolar Council on Indigenous perspectives had concerns in common with those of John Kautoke at the Kingdom of Tonga’s Embassy to the United Kingdom. The Inuit Nunaat of 180,000 people in four countries in the Arctic region and South Pacific islanders are similarly vulnerable to rising sea levels and the extreme weather associated with climate change. They also share a dependence on goods shipped on vessels burning fossil fuels that contribute to melting ice and rising seas.

“The complexities between economy and environment require careful measurement and balance. Strategies that are developed, therefore, must include the distinct voices of those within our communities,” Ms. Koperqualuk says.

“Pacific peoples and the peoples of the Arctic Circle face the degradation and destruction of their cultural identities as their environments and homes are gradually eroded by climate change,” Mr. Kautoke says.

To mitigate the damage, Tonga has goals for the upcoming sessions at the Marine Environment Protection Committee (MEPC) of International Maritime Organization. Those include the highest possible reduction of greenhouse gas emissions, which is 100 percent by no later than 2050, Mr. Kautoke says. Pacific Islanders are also calling for a basket of measures that includes a greenhouse gas levy and global fuel standard, the inclusion of the ‘polluter pays’ principle, and an equitable transition so that no country is left behind.

Roy Ombatti turns sobering e-waste statistics around by using the waste to build salable 3D printers. The world generates more than 40 million metric tons of e-waste each year according to a UN University report. And much of that winds up in developing countries where workers strip metals and other valuable materials from the parts, sometimes under dangerous conditions. We see 3D printers as a revolutionary tool that can be used for development...