The author is developing a bamboo bottle prototype as an experiment in designing with the sustainable material. Photo: Nishant Agarwal

White pine is one of the most common timbers used in construction and it is considered a fast grower. For a few years early in its lifespan, and in the right conditions, the tree can peak at 1 meter (36in) of growth per year. Some species of bamboo, on the other hand, can grow that high in a single day. While the pine may mature for commercial harvest within 4-5 decades, bamboo is ready for harvest within 3-7 years, depending on the species and environmental conditions.

Designers and engineers should take note. Bamboo is a giant, fast-growing grass with mechanical properties that make it an attractive material for construction and products. Bamboo’s strong fibers make it a structural alternative to steel and other materials. Initiatives underway, such as manufacturing plywood out of bamboo, and consumer products like tooth brushes and water bottles, demonstrate the diversity of uses of bamboo in products worldwide.

Bamboo as an engineering material has benefits over materials like steel and hardwood.

Bamboo is considered to be a poor man’s timber. Is that really true?

Bamboo as an engineering material has many benefits over other construction materials like steel and hardwood. Professor David Trujillo at Coventry University in Coventry, England, explains how bamboo could solve global problems in housing construction. Bamboo is under recognized as a viable material, he says. As an example of its potential, companies working in the North-East region of India are successful in developing high-quality ply-boards and beams that can be an alternative to steel and other structural materials, such as hard wood.

Bamboo may be considered a poor man’s timber, but engineered and industrially processed bamboo is widely used in the construction of corporate houses, airports, and other buildings, according to Professor Pablo Van der Lugt at Delft University of Technology in Delft, Netherlands.  For example, the ceiling at Barajas International Airport (T4), Madrid, designed by Richard Rogers, consists of 200,000 m2 (total area 1,200,000 m2) of gently curved laminated bamboo laths, and it is the largest industrial bamboo project in the world. 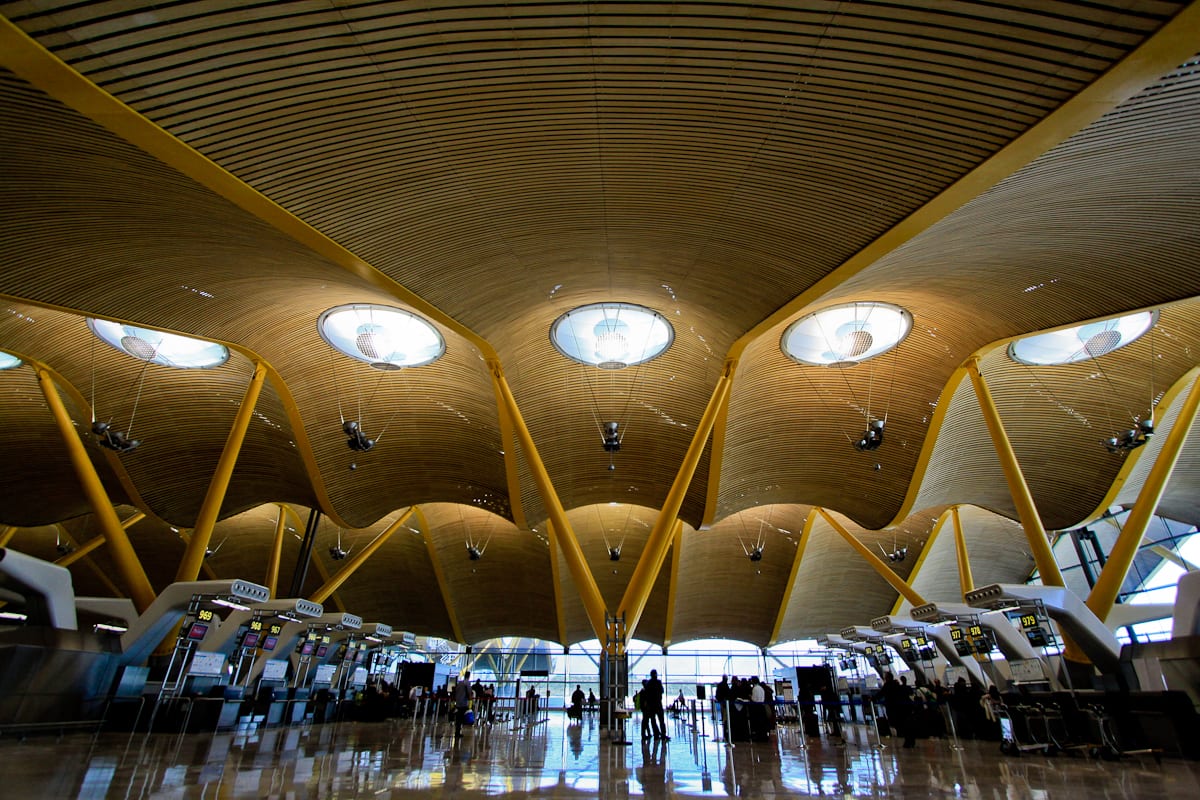 Bamboo defies its reputation as the “poor-man’s timber” as it adorns the ceiling at Madrid Barajas Airport in Spain. Photo: Matt Hintsa (CC BY-NC-ND 2.0)

Bamboo is a sustainable material that can replace conventional materials due to its rapid growth rate, improved properties and minimum cost by comparison. A growing body of research demonstrates experimental validation of bamboo’s properties. One study found that bamboo compares favorably to steel in some applications.

Designers have an ethical responsibility to incorporate sustainable materials like bamboo in their products.

“Bamboo grows extensively in regions where there are rapidly developing economies, so it’s an alternative building material to concrete and steel,” the study’s lead author Professor Lorna Gibson at Massachusetts Institute of Technology yin Cambridge, Massachusetts (USA), said in a statement. Another study at MIT identified bamboo’s mechanical properties to aid engineers considering its use in construction. And Professor Sumit Basu at the Indian Institute of Technology, Kanpur (India), studied the correlations between axial stiffness and microstructure of a species of bamboo.

Designers have an ethical responsibility to incorporate sustainable materials like bamboo in their products.

Image: From “Correlations between axial stiffness and microstructure of a species of bamboo,” January 1, 2017, Royal Society Open Science (CC BY 4.0)

Due to rising contamination and climate change, designers from several industries and academia are rethinking material selection. Bamboo has an organic structure and it can reduce the carbon footprint and lower steel dependency. Bamboo is widely used to make musical instruments, sports equipment, bicycles, helmets, iPhone covers, textiles, housing, paper, 3D printers, yarn and other products.

There is special potential for this material in the construction sector. As populations grow, so does demand for new housing. According to Prof. Trujillo, the potential to reduce our carbon footprint is huge. A three-meter stump of Bamboo stores 10 kgs of carbon. According to him, 1 hectare planted in Bamboo captures 1000 tons of carbon from the environment, which in turn is equivalent to 20 m3 of building material.

There are several barriers to the adoption of bamboo, including the regions where it grows, lack of codes and standards for its industrial production, research to back up properties, processing techniques, and a lack of integration with educational systems.

To make bamboo mainstream, we need to define codes and standards.

To make bamboo mainstream, we need to define codes and standards, Professor Trujillo says. Lack of design data and studied properties lead designers to select other materials. We need to start teaching about materials like bamboo to encourage research that will, in turn, create demand for bamboo. It is our responsibility as engineers and designers to address material selection in a better way, considering the sustainability and environmental impact of our products.

While writing this article and reading the literature on bamboo, I began an experiment in developing a Bamboo bottle. I’ve been prototyping the bottle over the last few months. This has led to several findings. For example, it is easy to machine and shape bamboo on a conventional lathe. Making bottle threads, however, is still quite a challenge. Throughout this process, I have realized other possibilities for the material. Bamboo’s organic structure is leak-proof and thus can be used to make containers to carry fluids in general. I encourage engineers and designers to start experimenting with bamboo to discover its potential in order to develop more sustainable solutions and products. 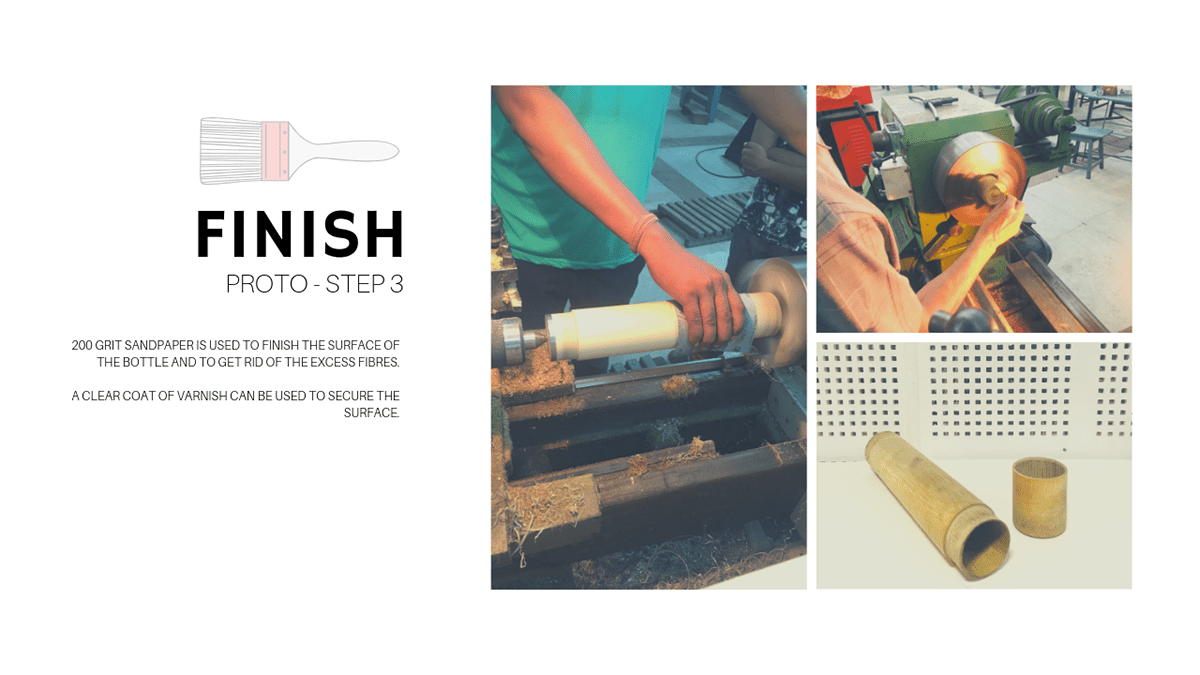 The final step in the prototyping process of Bionicli, a bamboo bottle that the author is developing. See the series of photos and descriptions at Behance.

This is the Innovate for Impact: Siemens Design Challenge in numbers. The challenge has had a staggering reach worldwide, sweeping up interest in homes, businesses, and universities in 34 countries. Congratulations to the finalists as we enter Phase II. For details, supplementary resources and introductions to the judges, please click on the graphic below or visit this URL: www.engineeringforchange.org/siemenschallenge.