Editor’s note: Following this analysis of erosion at US beaches, please see a discussion of the challenge as it plays out in developing countries.

Coastal communities around the world are struggling to adapt to rising sea levels and increasingly severe coastal storms. In the United States, local governments are making investments to reduce those risks, such as protecting shorelines with seawalls, “nourishing” eroded beaches by adding sand and rerouting or redesigning roads and bridges.

In the short run, spending public money this way is economically rational. But in the long run, many people who live near coastlines will probably have to relocate as seas continue to rise.

We have studied this problem by combining insights from our work in economics, coastal geomorphology and engineering. As we have explained elsewhere, short-term actions to adapt to coastal flooding can actually increase risks to lives and property. By raising the value of coastal properties, these steps encourage people to stay in place and delay decisions about more drastic solutions, such as moving inland.

According to recent estimates, a 1-foot increase in sea levels will put about 1 million people in the United States at risk, and 3 feet will threaten about 4 million people. Global sea levels currently are projected to rise 0.5 to 2.1 feet by 2050 and 1.0 to 8.2 feet by 2100.

As we see it, market forces and public risk reduction policies interact in unexpected ways, reducing incentives for communities to make long-term plans for retreating from the shore. Nourishing beaches and building seawalls signal to individuals and businesses that their risks are lower. This makes them more likely to build long-lasting structures in risky areas and renovate and maintain existing structures. As a result, their property values increase, which reinforces economic and political arguments for more risk-reduction engineering. 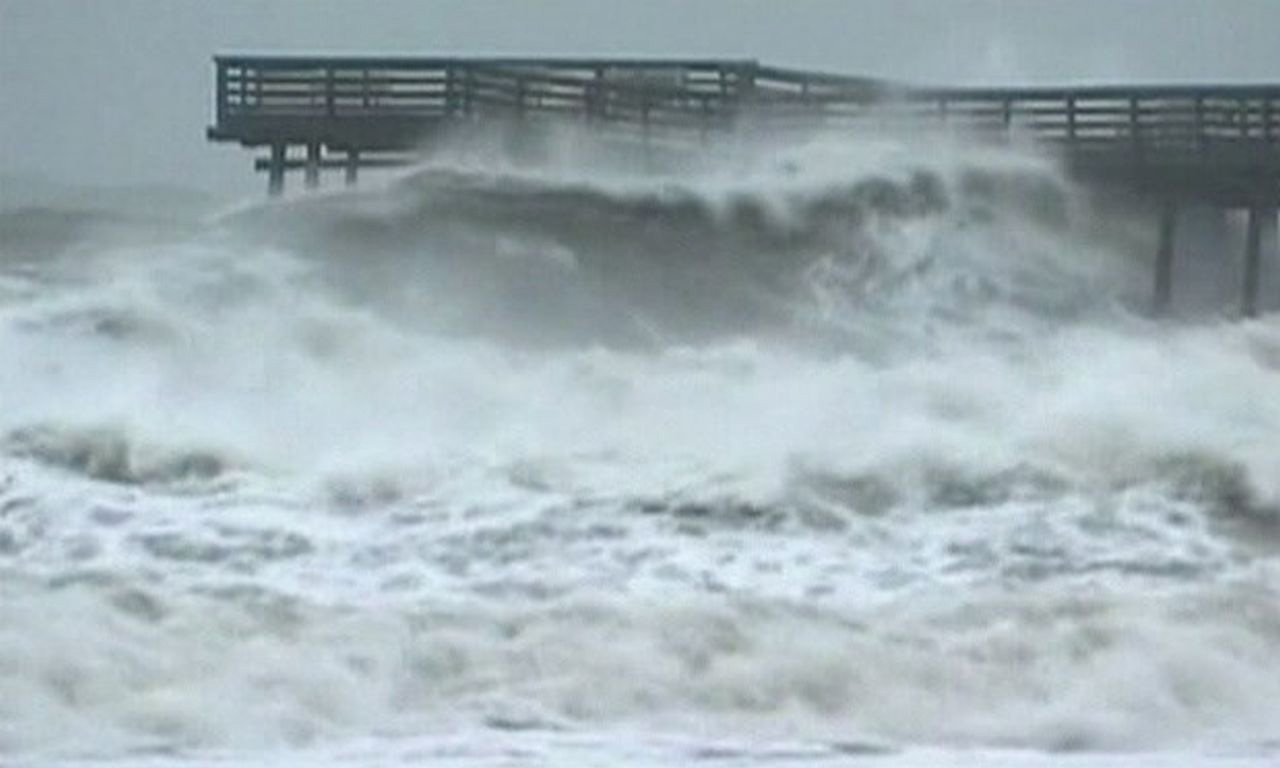 To illustrate this pattern, we compared a sample of houses in Nags Head and Kitty Hawk, North Carolina, two popular beach towns less than 10 miles apart on North Carolina’s Outer Banks. When we consulted county tax appraisal values, Nags Head beaches had routinely received sand from beach nourishment, whereas Kitty Hawk beaches had not. On average, homes in our Nags Head sample were worth over US$1 million, while homes in the Kitty Hawk sample were worth about $200,000.

Other researchers have found that in some locations, the threat of rising seas is eroding coastal property values. But this tends to be true for properties that are viewed as highly vulnerable – for example, homes that have already flooded. In contrast, homes that are elevated or have other flood-proofing features tend to have much higher values, so they are perceived as assets.

Some amount of risk reduction makes sense. If people who benefited paid its full cost, and everyone involved understood how imminent the risk was and how much engineering solutions would cost, then market forces would likely produce reasonably efficient solutions.

As an example, flood-prone Norfolk, Virginia recently adopted an ordinance requiring almost all new homes and many major renovations to be elevated and include other flood-proofing features. This approach will help to price flood protection into the cost of homes and will tend to reduce demands to directly subsidize protective engineering, flood insurance and post-disaster assistance.

In our view, such solutions are a move in the right direction. But they will not break the positive feedback loop we describe as long as other public policies continue to skew perceptions of the long-term viability of coastal communities.

Engineering projects to slow shoreline retreat and reduce flooding generally receive smaller subsidies now than in past decades, but many communities still benefit. For example, beach nourishment in Ocean City, Maryland is cost-shared between the federal government, which pays about half, and state and local agencies. The Federal Emergency Management Agency helps pay to rebuild homes and public buildings damaged in major disasters. And allowing people to deduct local taxes on their federal tax forms partly subsidizes local tax financing for risk reduction.

Information and uncertainty are larger problems. Many coastal residents do not perceive medium- and long-term climate risk to be as serious as the scientific consensus suggests. Moreover, scientists are still analyzing how fast sea levels are likely to rise. Future storm frequency is uncertain, and could be affected by changes in global greenhouse gas emission trends.

On the positive side, engineering innovations such as designing storm-resistant homes could become more effective. But existing approaches like beach nourishment are likely to become more expensive as sand resources diminish and more communities compete for them. And growing uncertainty is likely to increase near-term demand for risk reduction engineering.

The most critical time for adaptation decisions is immediately after a storm or flood. Faced with expensive repairs or rebuilding, property owners face higher costs to return to the status quo. But if homeowners expect that public resources will be spent to protect them against future disasters, they are less likely to consider making big changes.

Federal or state financial rebuilding assistance creates a similar bias. If that money were used to subsidize relocation or other drastic adaptive actions, rebuilding patterns would be different. So far, however, programs for buying out flood-damaged properties have been largely unsuccessful. Many factors, including residents’ level of experience with disaster recovery and financial concerns, can make people unwilling to consider relocating.

There is no perfect formula for balancing near-term climate-proofing against more drastic steps to move people away from the coasts. But we believe that when communities focus excessively on reducing near-term threats, they risk inhibiting the successful adaptation that they are trying to promote.

We have three suggestions for breaking this cycle. First, local land use policies could be designed to discourage rebuilding homes to similar or higher property values after damage from storms. Second, communities could put increasing emphasis on adaptive engineering and large-scale planning practices – for example, sunsetting beach nourishment projects when sea level rise reaches some preannounced level.

Finally, adaptation decisions could be planned and implemented at a multi-jurisdictional level, rather than town by town. This approach would help to avoid “rich towns get richer” dynamics that can develop when wealthier jurisdictions deploy sand resources and other protective measures in a way that reduces their own risk while ignoring or heightening threats to nearby locations.

Change is coming to coasts around the world. We believe that broader understanding of how markets and public policy interact is essential to minimize the social and economic costs of this change.

Editor’s note: E4C asked the authors how their analysis might apply to conditions on coasts in impoverished regions and emerging economies.

“We do think that the dynamic we describe plays out in developing country contexts — the value of build capital per person would likely be lower than in developed countries, but as a share of the wealth of residents it might be higher or lower,” Andrew Keeler says. Keeler and his colleagues published a paper in the journal Earth’s Future in which they mention two countries confronting the erosion problem with similar lack of foresight as the US beaches the researchers analyzed.

Ghana and the Marshall Islands are examples of where risk-reducing engineering is already interacting with private decisions about the stock of built capital in developing countries.

One of the sources cited, Foreign Policy, tells the colorfully detailed story of Fuvemeh, a coastal village in Ghana that is losing land to the sea. Two sentences capture the scope of the problem.

Fuvemeh is one of thousands of communities along the western coast of sub-Saharan Africa, stretching more than 4,000 miles from Mauritania to Cameroon, at risk of being washed away. Spurred by global warming, rising sea levels are causing massive erosion — in some places eating away more than 100 feet of land in a single year.

And because costs will always be at the forefront of any discussion of climate change adaptation, UNESCO made an estimate based on a “very limited number of studies” available.

…the costs of adaptation are likely to be lower than the costs of doing nothing. However, the cost of adaptation is already considered to represent between 5 and 10 percent of the GDP [gross domestic product] of affected countries, which is a significant sum, especially for the economies of the least developed countries.

Dylan McNamara is Professor of Physics and Physical Oceanography at University of North Carolina Wilmington (USA).

Jennifer Irish is Professor of Civil and Environmental Engineering at Virginia Tech (USA).

A version of this article was originally published on The Conversation. Read the original here.

A solar-powered water desalinator, a passive irrigation controller and cooking fuel made from used diapers made our list of promising prototypes to watch this year. We polled our network of design and engineering experts for their recommendations. We also dipped into the successful design challenges and awards we hosted in 2020. To make the list, these prototypes were selected by our expert network and they are in development or have...