Field your prototype: $650k in awards for mHealth tech development 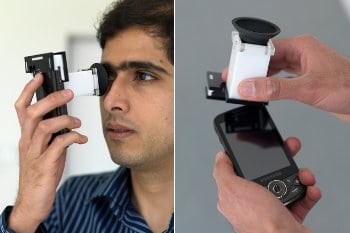 A clip-on eyepiece called NETRA turns a phone into a vision tester, one of this year’s winners of a Vodafone Foundation project development award. Photos courtesy of eyenetra.com

Two influential mobile technology organizations are offering four awards of up to $300,000 to promising mobile health technology projects under development. With our community’s intense interest in prototyping, we think a team of E4C members should take home one of these awards.

Now through Dec. 31, the Vodafone Americas Foundation, the US arm of the telecom giant’s global foundation network, is offering three prizes of $300,000, $200,000 and $100,000 to the top three placers in its Wireless Innovation Project. The mHealth Alliance, which promotes mhealth research and development, and has the Vodafone Foundation as a founding member, is also offering $50,000 to a finalist in this year’s competition.

These projects should have global scope, like many of those already in E4C’s workspaces, and they should be more than just an idea. Vodafone wants to see results quickly, and awards its prizes to teams with projects that are ready for advanced prototypes, field tests or market tests.

Since 2009, these awards have helped developers make advances, many have redesigned their prototypes and most are running field tests. They have also gone on to win other prestigious awards and grants.

“All of our past winners have gone on to make significant progress with their innovations and, with the help of our prize money, are that much closer to reaching the people who will benefit greatly from their solutions,” Peter Barry, president of the Vodafone Americas Foundation, said in a statement.

Gil Zussman and the Columbia University team behind Energy-Harvesting Active Networked Tags(EnHANTs) is one of the teams that have made leaps forward since winning an award in 2009. EnHANTs are tiny tags that generate their own power and attach to objects to track them.

“Vodafone has supported us in countless ways during the past two years, propelling our progress and magnifying our social impact,” Zussman says.

Take a look at this year’s winners for a look at the potential that this award is promoting.

The Near-Eye Tool for Refractive Assessment (NETRA) is an eyepiece that clips on to mobile phones to perform vision exams. Look into the eyepiece and maneuver images with the keypad until they overlap, and NETRA will diagnose vision problems such as near and far-sightedness, astigmatism and others.

The device can use the phone to send the test results to a clinic. MIT’s Media Lab designed the device to cost about $2 and perform the test in about two minutes. It can replace the need for specialized equipment and highly trained experts in the field away from medical centers.

David Schafran, co-founder and CEO of EyeNETRA, the company established to distribute the device, sees the system as a long-overdue update to the common eye exam. He explains what he calls “the most radically affordable eye diagnostic ever made, all on a mobile phone,” in the video at left. The company plans to begin distributing the device next year, Schafran told E4C.

Smart Diaphram is a device that women with high-risk pregnancies can use to monitor their condition and hear warning of early labor. A team from the University of California in San Francisco developed the device to sense collagen levels in the cervix, a predictor of pre-term labor. It transmits the results of the self-exam to a database in the cloud that is monitored by clinicians. The team won both Vodafone’s second place award and the mHealth Alliace’s prize. Please see Vodafone’s write-up for more. 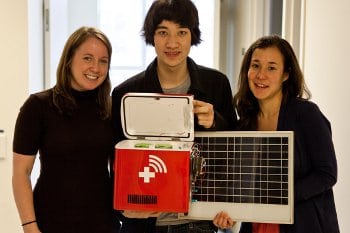 Tuberculosis strains that have become resistant to multiple kinds of Tb drugs are deadly and require a strict medication regimen for at least a year and a half. Compliance with the prescriptions is a problem, and, in fact, non-compliance is how Tb becomes multi-drug resistant. In developing countries, the problem is compounded by a lack of access to clinics where drugs are stored and even to refrigerators for storing the drugs at home.

To address the problem, a team from MIT, Massachusetts General Hospital and the Global Health Committee, an international health organization, developed a solar-powered drug refrigerator that communicates wirelessly. The system, called Cool Comply, keeps record of when the fridge is used and transmits the information to health professionals.

The first field trials began this month in Addis Ababa, Ethiopia. See this slideshow below or Vodafone’s description for more information.

We’re at a “tipping point” in the field of mobile health technology, says Patty Mechael, head of the mHealth Alliance. Demand is increasing for scale and sustainability in mobile health solutions, Mechael says, and there are already improvements in healthcare access to services. We think E4C members should take part. For details and to apply, please see project.vodafone-us.com.

Leaders in developing technology for sustainable development took the stage April 6th for the Engineers Without Borders – USA Global Innovations Forum. Chapters and other participants watched the event’s live stream online and interacted over Twitter. We heard the message of sustainability through reciprocation, design, business model and scale repeated in thoughtful speeches and tweetable sound bites. The forum included case studies in the work by Bridges to Prosperity, the...

Inventors have recast the bicycle as a cheap power supply for myriad products. The world’s most efficient transportation device now handles everything from poop...

Editor’s note: This article is a reprint of a page that appears in print in Appropriate Technology, Vol 47, No. 3. It is published...